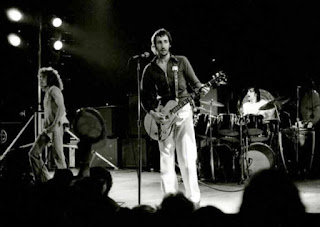 On November 22, six days after my trip to Disneyland, I was at the LA Forum for the first of two shows by The Who, a group I knew well and whose fortunes I followed keenly. I’d already seen them many times in the UK and was convinced that on a good night no one could touch them for power, intensity and, above all, sheer unbridled excitement, but the word was out that this tour, on which they played virtually every song from Quadrophenia, their new album, wasn’t going as well as they’d hoped. Two nights previously, on the opening date at the Cow Palace in San Francisco, Keith had collapsed towards the end of the concert whereupon, at Pete’s behest, a member of the audience had climbed on stage, settled himself behind the drums and played along for three more numbers.
I hadn’t seen The Who for over a year, my longest gap between Who shows since joining the staff of MM in 1970. I was desperately looking forward to seeing them again, the only blue note being that I wouldn’t be able to bring Christine along to the Forum to witness the wonder of The Who in full flight alongside me.
Tour boss Pete Rudge gave me a yellow laminate with the nuclear radiation symbol on the front, for some reason the Quadrophenia tour all-access pass, and all seemed well in the dressing room, but when The Who arrived on stage I knew something wasn’t quite right. The show lacked the reckless spontaneity of previous performances I’d seen, partly because most of the songs from Quadrophenia required them to play along to tapes of pre-recorded synthesisers. This restricted their free-flowing style, so the hell-for-leather momentum that surged through The Who at their best was missing somewhere. The problem was exacerbated when Roger and Pete paused the set to explain the story of Quadrophenia – Mod-related and therefore difficult for Americans to grasp – between songs, and this further interrupted the flow of the concert. At the far side of the stage John looked pissed off, as if he wished they’d just shut up and get on with it, but Keith was his usual cheery self, clearly unfazed by what had happened in San Francisco.
Still, when they were done with Quadrophenia they were as good as ever, which was probably frustrating for Pete if not the other three. The crowd still adored them, as I made clear in my MM review. “19,500 fans had stomped and cheered for over 15 minutes in the Forum, refusing to leave even though the house lights had been raised and probably well aware that The Who rarely did encores,” I wrote. “But tonight their enthusiasm was rewarded with just that. The group came back and did an encore – actually ‘Baby Don’t You Do It’ – only the second time I’ve seen this happen in watching The Who around 20 times... they blasted through the song, climaxing with Townshend unstrapping his Gibson Les Paul and, gripping the fretboard as if it were an axe, bringing it down on to the stage with a resounding crash time and time again until it cracked around the 12th fret.”
The following night I went to the second Forum show, which was an improvement on the first, and beforehand visited Keith in his suite at the Century City hotel. In the bathroom there was a gaping hole in the wash basin where the plughole ought to have been.
“What happened here?” I asked after using his loo and hesitating before turning on the tap to wash my hands.
“I had an accident,” said Keith. “Use the bath.”

In early December Ray Coleman, MM’s editor in London, rang to tell me to relocate to New York asap, just like that. The reality was that in both time and distance Los Angeles was simply too far away from London for the practical needs of doing this job. In the days before faxes, let alone e-mails, communication from the west coast of America was difficult, the courier took too long to deliver my work, the eight-hour time difference was problematic for phone conversations. I didn’t have much, just one suitcase for clothes, a portable typewriter and a stack of LPs that I had no choice but to give away, but LA had two more surprises for me.
Because I’d been using Phil Ochs’ typewriter to write my MM stories I’d loaned my inferior Olivetti portable to Christine who could touch type and liked to use it for writing letters home. In the rather delicate circumstances that surrounded the end of our fling, I’d more or less forgotten about it. I knew that by now her boyfriend would have returned from Mexico and might even be staying with her in Santa Monica, so she – let alone he – probably wouldn’t welcome my dropping round. Nevertheless I needed to get my damn typewriter back. I called her house, got her on the phone and explained my dilemma. She agreed I could stop by so she could hand it over.
I made that difficult call on the day before I was due to leave LA. In the early evening I had just emerged from the shower and was preparing to head out to collect the typewriter when I heard the front door being opened with a key. With only a towel wrapped around my waist, I walked down the corridor towards the living room where I was confronted by none other than Phil Ochs, in person. I recognised him instantly. He didn’t look well. He was overweight, unkempt and sweating. He carried two plastic bags full of cans of beer and he sat down and opened one. I don’t think it was the first he’d had that night.
“Michael told me you would be here,” he said. “I just came by to use the phone.”
“That’s fine,” I said. “Pleased to meet you Phil.”
“Are you going out?” he asked.
“Yes. I need to finish getting dressed.”
“OK. Sorry to barge in.”
“It’s your flat. But I’m leaving tomorrow.”
“I know. Michael told me.”
He looked around his living room and saw that nothing much had changed. Then he went over to the stereo and put on an album of classical music, very loud, fortissimo. Then he switched on the TV news and cranked up the volume so that it could be heard above the music. Then he picked up a telephone and made a call, yelling into the phone. The din was far, far louder than anything I had made in the previous three months. Phil drained his beer, threw the can on the floor and opened another, and then another. The music and TV blared on and when I was dressed and back in the living room I sussed that he was ringing round trying to find a bed for the night. He virtually ignored me. After about five calls he found one, and promptly left as suddenly as he had arrived.
“I gotta rush,” he shouted, gathering up the bags of beer cans. “See you around.”
He slammed the door behind him and I turned off the stereo and TV and sat down. The silence was deafening. I’d wanted to tell him about how I’d enjoyed living in his flat, about how I’d appreciated listening to his records, about how I’d taken advantage of his library, maybe even discuss his book The Sexual History Of The World War. I wanted to tell him that I was genuinely grateful for having had the opportunity to live among his possessions and that it had been an enlightening experience for me. But he was gone.

Half an hour later I drove to Santa Monica, to the house where Christine worked as an au pair, to collect my typewriter from her. I rang the bell and she came to the door with it but instead of simply handing it over she stepped outside into the night and walked down the path. I followed her until we were a short distance away from the house, out of earshot. It was an awkward moment, the first time we’d seen one another since the return drive from Disneyland.
“Thanks for letting me borrow this,” she said, giving me the typewriter.
“It was a pleasure,” I said. “And so was everything else.”
I looked up and in the doorway a few yards behind her was the silhouette of a young man I didn’t recognise but assumed was her boyfriend. He was staring down at us, unsmiling. I didn’t know how much he knew about what Christine and I had got up to while he was in Mexico.
“Yes, I know,” she was saying. “And thank you for everything else too. It was… it was lovely. You were so lovely to me. I won’t forget it.”
She touched my cheek, a last act of affection, and I squeezed her hand. Then we turned our backs on one another, both of us assuming that this really was the end and we wouldn’t see each other again, ever. A few minutes later I was driving back to Hollywood. I didn’t feel like going out on the town on my own, so on my last night in LA I ate alone at Ben Franks on Sunset, then went back to Phil’s apartment and watched TV.
The next day I packed my case, dropped off the Ford Pinto at LAX and flew to New York, checking into the Gorham Hotel at 136 West 55th Street. A week or so later I moved into an apartment above a deli on Lexington Avenue between 55th and 56th Streets. From now on, and for the next three years, I would be MM’s US correspondent based in the Big Apple, like Roy Hollingworth and Michael Watts before me.

And that just about concludes my memoir of the time I spent as Melody Maker’s man in America in Los Angeles but if you’ve read this far it would be remiss of me not to close by mentioning that Christine and I did meet again, and quite soon as it happened.
Christmas was fast approaching, my first away from home, and I didn’t fancy spending it alone. More out of hope than expectation, I called Christine in LA, inviting her to join me in New York for the holiday, even offering to pay for her flight. To my astonishment and delight she accepted. She was due to return to the UK soon anyway and, providentially from my point of view, her boyfriend had preceded her. In a mature and, for me, uncharacteristic understanding that rarely happens in the real world, we agreed that our attachment was strong enough to withstand the switch from romantic to platonic, from lovers to friends.
And so it was that after a chaste night in bed together on Lexington Avenue, on Christmas Day morning of 1973, 47 years ago last week, Christine and I bundled up against the crisp New York winter and took in the splendour of Central Park from the back seat of a horse-drawn carriage.
All’s well that ends well.

A great series, Chris. Thanks very much.