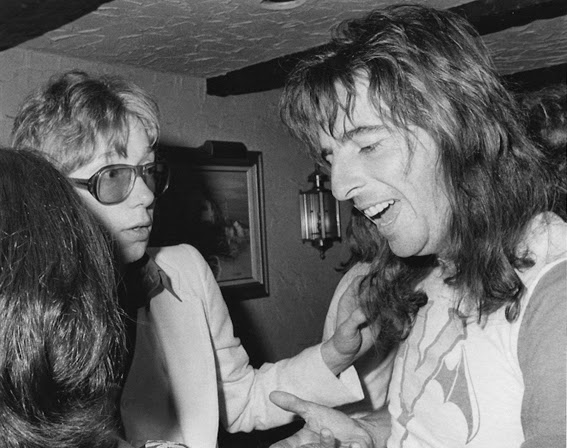 With Alice Cooper in the spring of 1974, at a restaurant on New York’s Upper East Side. Earlier that year I’d been on tour with Alice, flying with his manager Shep Gordon from New York to Madison, Wisconsin, where it was unbelievably cold. The exquisitely fragrant actress Cybill Shepherd was also accompanying Alice, covering the tour for some up-market woman’s magazine. We interviewed Alice together in a hotel suite, and for a moment I thought Cybill and Alice were an item but they weren’t. Of course, I couldn’t stop imagining her undressing on the diving board in the famous swimming pool scene from The Last Picture Show. Most unsettling it was.
At this time Alice Cooper was the name of the group, not just the lead singer who subsequently took the name for himself and replaced the band with hired hands. But the writing was on the wall as during the concerts there was a hidden guitarist playing solos in the wings that the audience couldn’t see. No-one tried to hide this from me. It was regarded as perfectly normal but I remember thinking how outrageous it would be if, say, The Who or Led Zep had a guitarist in the wings covering for Townshend or Page – unheard of! And the Cooper band was aspiring to the same level.
My connection with the Cooper crowd was eased by a solid friendship with Ashley Pandel, his publicist who worked for the Cooper set-up, Alive Enterprises, which was run by Shep. Ashley would go on to form his own PR company in NY, the Image Group, with Alice as a star client, along with Lou Reed, The New York Dolls, Todd Rundgren and a few others. When Ash got tired of that he opened a restaurant and bar at 13th Street and 5th Avenue which became the city’s top music biz hang-out from the night it opened.
It was during my first year in New York that Alice’s tall blond drummer Neal Smith married another statuesque blonde, a model by the name of Babette, with the reception on board a boat that circled Manhattan, to which I was invited. Because police intervention could come only from another boat which would be seen approaching, parties held off shore like this offered opportunities for extreme debauchery, and this was no exception. Gallons of booze, shitloads of cocaine, fragrant cigarettes made from Old Nick’s navy cut, private cabins for intimate liaisons – you name it. It was well after dawn when the boat docked and its dishevelled, bleary-eyed passengers disembarked.
The goodie bags contained a beautiful commemorative white t-shirt with lace trim and a medallion that I wore for several months until I gave it away in a failed attempt to establish a relationship with a girl from Capricorn Records in Macon, Georgia, where I’d gone to do a story on the Allman Brothers Band. She accepted the gift and then informed me that Butch Trucks, ABB drummer, had his eye on her too and that his reaction to any competition on the romantic front might involve firearms. I withdrew.
Posted by Chris Charlesworth

Ashley Pandel passed away in Fennville, Michigan. He was living alone in an apartment. 12-10-2014

Start following our signals NOW and earn up to 270% per day.

No guitarist back stage. He was on stage WITH the band. Mick Mashbir.