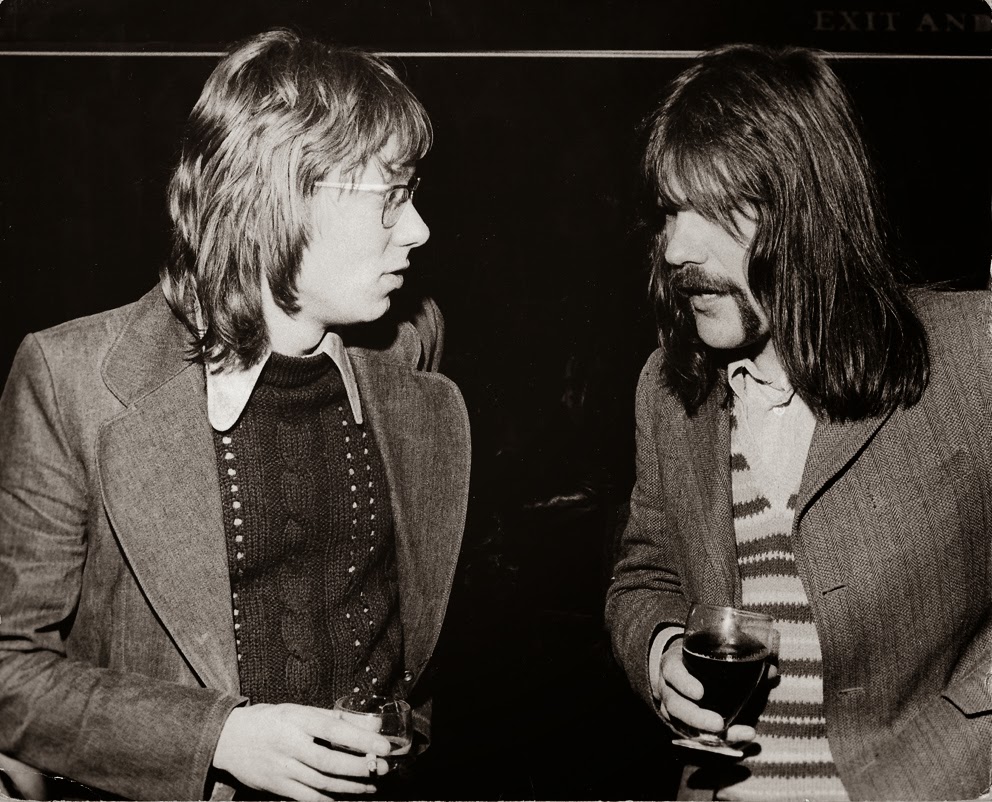 With Ray Jackson, of Lindisfarne, though I have no idea where this picture was taken, probably in London in ‘71 or ‘72 as the only time I can recall being with Lindisfarne in the US was, I think, when they happened to support Badfinger at Carnegie Hall in New York in ‘72, and I was there to do a story on Badfinger. What an awful jacket I’m wearing and I confess, too, that it had flared jeans to match.
Ray sang, and played harmonica and mandolin in the band that invented Geordie folk-rock, and it is his mandolin that can be heard on the first few bars of Rod Stewart’s ‘Maggie May’. He wasn’t credited and received only £15 for his troubles, a contentious issue with him that rankled for years.
I knocked around with Lindisfarne quite a bit during their glory years in the early seventies, and even toured Ireland in their company, a far from sober experience. We all visited the Guinness brewery in Dublin together, accompanied by Charisma boss Tony Stratton-Smith. They were super successful for a couple of years, the jewel of Charisma’s crown, but label rivals Genesis proved more durable in the long term. Festival crowds loved Lindisfarne as many of their songs were attuned to the laissez-faire spirit of the era, the ideals shared by festival-goers, and perfect for sunny afternoon sing-alongs. Their secret weapon was songwriter Alan Hull who had a lovely way with a melody and wrote words, often tongue-in-cheek, that conveyed his man-of-the-people beliefs.
One time when he was touring solo my friend Glen brought Alan round to my flat in Hammersmith for a natter and Alan played my Gibson acoustic guitar, which he wanted to buy. But I wasn’t selling. He was spending the night on Glen’s couch in his flat around the corner. Generally when he toured solo, for economic reasons Alan crashed out at friends’ or fans’ gaffs in the towns where he played. He travelled around in an old Rover 2000, all his gear in the back, driving himself of course.
The last time I saw the original Lindisfarne quintet was at the Half Moon in Putney in the early ‘80s, on a five-night run, for which they were paid £5,000, ie £1,000 per man or £200 each a night. Needless to say the canny landlord paid them in cash after each show and kept the bar open after hours. So much of that cash ended up where it came from.
Posted by Chris Charlesworth

Did you know you can shorten your long urls with Shortest and get money from every click on your short urls.

Follow our signals right now and profit up to 270% per day.