WITH MOONIE AT THE TOMMY MOVIE PREMIERE, New York, 1975 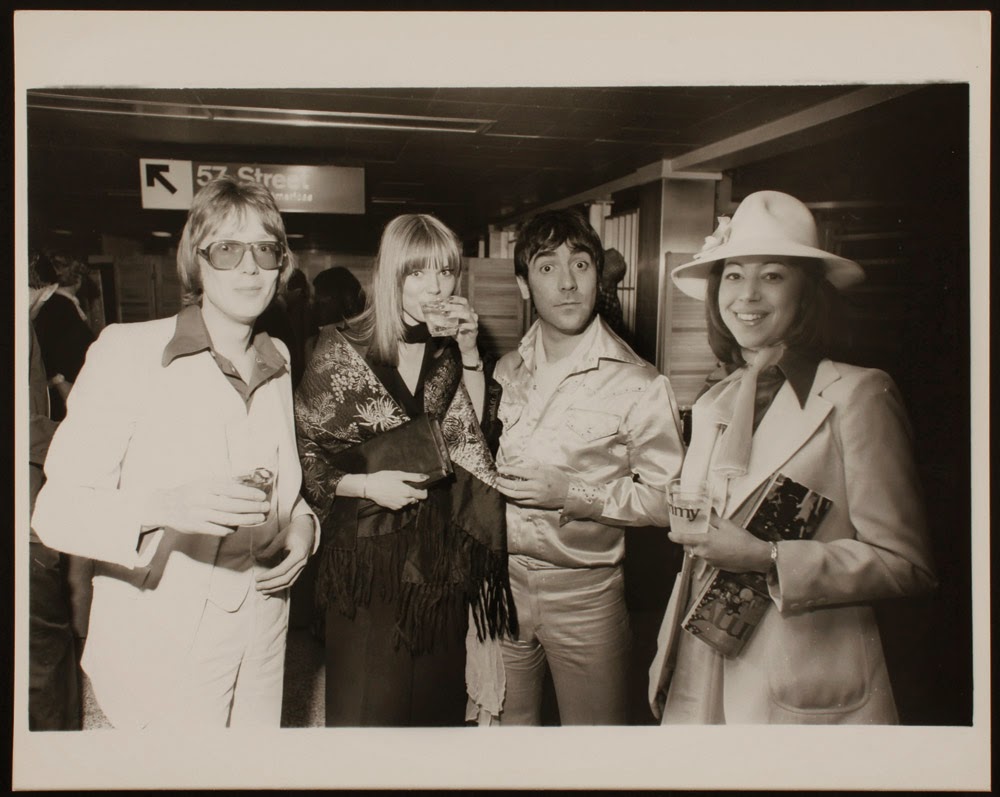 I posted this picture on Facebook last year before I launched Just Backdated but being as how the blog has now become a sort of compendium for all my writing about The Who I though it belongs here now. It was taken on March 18, 1975, in New York, with me in a spiffy white suit alongside Moonie and Annette, his main squeeze from 1974 onwards, and my date, whose name I have inexcusably forgotten, at the party following the premiere of The Who’s Tommy movie, held for reasons I could never figure out in the subway station at 57th Street and Sixth Avenue. It was the first and only time I ever met Annette. As Tony Fletcher points out in Dear Boy, Keith’s performance as Uncle Ernie will always be his best-remembered film role.
I was never convinced by the Tommy movie, always thought it was too much of a pantomime really, and as for the singing of Oliver Reed and Jack Nicholson, well I could have made a better fist of it myself. To my way of thinking Tommy deserved a bit more gravitas on the big screen, and less tom-foolery; no doubt Ken Russell felt differently and that an over-the-top production was in order. The best scene was Ann-Margaret and the baked beans, Elton fizzed and popped, and Roger gave his all, finally becoming Tommy in the way that began when The Who first played their best known extended work in the summer of 1969. Tommy launched Roger’s parallel career as an actor, opening up a whole new world for him that he was able to enter when Pete felt the need to seek creative opportunities outside of The Who. If only Keith and John had been able to find niches like this, then maybe they’d be with us today.
Keith was living with Annette in LA at the time of the Tommy launch parties and I didn’t see him anywhere near as much as when he lived at Tara House in Chertsey. I last saw him play drums with The Who at Jacksonville Gator Bowl on August 7, 1976, a staggeringly good show as it happens, and the very last time I saw Keith was at a Lynyrd Skynyrd album launch in New York in 1977, to which he turned up in a loud pinstripe suit, drunk as a skunk. As I may have written in another piece on Keith elsewhere on Just Backdated, Peter Rudge, The Who’s US manager who also managed Skynyrd and for whom I worked at the time, asked me to keep Keith away from him as he’d probably beg for money. It was my first intimation that Keith, of all people, was broke – and sick with booze too. He was very podgy, glassy eyed and mournful. I knew something was terribly wrong but like everyone else I hadn’t a clue what to do about it, nor was I in a position to really.
No rock star ever enjoyed being a rock star more than Moonie – or brought so much enthusiasm to the role (or made people laugh so much). Alice Cooper put it best, talking to Tony Fletcher for his biography Dear Boy: “I wasn't surprised when Jim Morrison died. I wasn't surprised when Janis Joplin died. I was surprised when Keith Moon died. Because he had no death wish. He was having too much fun living.”
(Thanks, as ever, to Bob Gruen for the picture.)
Posted by Chris Charlesworth

I've never been able to sit through Tommy the Movie. I think by that point Ken Russell himself had lost his way. I agree with your post. Too much garish spectacle, too little introspection. Oddly (perhaps), I did grow to like the original orchestrated version.

So glad though that I saw the tail end of the white boiler suited performances, (Empire theatre L'pool 1969), and then a couple at the Uni soon after for Who's Next. They were a force of nature.

The Tommy movie premiered in 1975, actually.

Right! Typo in the heading but not the text. Thanks. CC

Are you sure Skynyrd had an album-launch party in 1977? Maybe it was January 1975 that Keith partied with them in NY in his pinstripes? Do you happen to remember which venue.