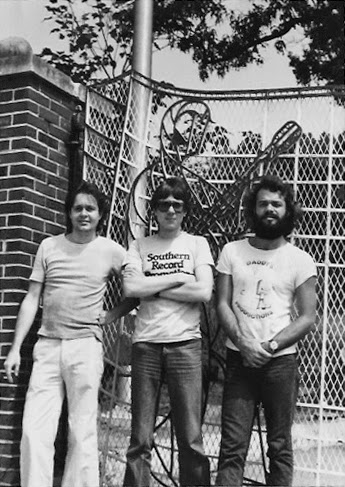 The Elvis ad I posted on my Facebook page yesterday, the one with Jimmy & Noel on guitars, Marvin on back-up vocals, Sheryl on bass, Keith on drums and Stevie on keyboards, takes me back to Memphis where, on August 2, 1977, I stood outside the famous wrought-iron gates of Graceland with Peter Carr (left) and Lenny LeBlanc (right). Assuming the occupant of Graceland was home (and I think he was), this was the closest I ever got to him. Note the date – he died two weeks later. I had tickets to see Elvis at Long Island Coliseum that September, and had he not shuffled off this mortal coil it would have been the first time I'd seen him. Then again, bearing in mind the state he was in by that time, I maybe didn't miss much. Back in 1957, aged ten, I had the first two Elvis albums and decorated the inner sleeves with pix of the King cut from magazines. “Ready, set, go man go…”
LeBlanc and Carr had a US hit with ‘Falling’ that year and were managed by Pete Rudge for whom I worked at the time, and I was their tour manager on a mid-South tour that summer. Lenny LeBlanc was a singer (after Elvis' death he had a US hit with a tribute song called 'Hound Dog Man') and Pete Carr a Muscle Shoals session guitarist whose house just outside the town I stayed in once or twice. I remember MS was in a dry county in northern Alabama, no bars and no alcohol served at restaurants. If you wanted a drink you headed for the Tennessee state line where a one-horse town had been established purely to cater for the drinks trade. Two other things I remember about trips to northern Alabama: in the magazine section at supermarkets almost all the mags were about guns or god, and if you were unlucky enough to have to stop for a slow goods train at a rail crossing you could be sat there for 20 minutes… the trains seemed like they were two miles long.
Posted by Chris Charlesworth

Two days before the infamous "bodyguard book", "Elvis What Happened?" hit the shelves. He knew it was coming, and was aware of much of the contents. So yes, for sure he'd be upstairs behind the silver foiled windows....

Yes, it was serialised in the National Enquirer where I read an extract, then went out and bought the book. Two weeks later that same paper had a photo of Elvis in his casket on the front page, taken I believe by Caroline Kennedy who'd manage to smuggle a camera into Graceland where Elvis lay in state, probably because no one thought to search her, of all people.

eToro is the best forex broker for rookie and advanced traders.