I’ve always been a Paul Simon fan, at least since I heard ‘America’ and went backwards to the albums before Bookends. I interviewed Paul at length in New York when his There Goes Rhymin’ Simon album came out, and half way through the interview excused myself to use the bathroom in his manager’s offices where the interview took place. I thought I’d turned my tape recorder off but maybe I left it running. Either way when I got home and played back the tape there was a message from Paul telling me I ought to stop smoking – I guess I must have lit up in his presence but he was too polite to say anything.
I used to bump into him sometimes at the Academy of Music on 14th Street where he’d slip in to watch a band incognito, wearing one of those parkas with the fluffy hood that he’s photographed in on his first solo album. If he saw me he’d put his finger to his mouth to indicate ‘Shhhh’. He didn’t mind a quick chat but didn’t want to be identified to all and sundry.
In 1997 I wrote a small book called The Complete Guide to the Music of Paul Simon and Simon & Garfunkel. It was one in a series of CD-shaped books that Omnibus published during the nineties, about 45 in all, and also included the one with a similar title that I did on The Who. Here’s what I wrote about Simon’s pre-S&G era. Tomorrow I'll post what I wrote about Graceland. 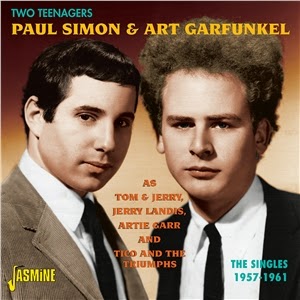 The common perception that Simon & Garfunkel emerged from nowhere as overnight successes to enjoy a number one hit with their first ever single belies the lengthy musical apprenticeship that Simon, at least, underwent before Billboard magazine showed 'The Sound Of Silence' at the top of its Hot 100 in December of 1965.
In the beginning, as Tom & Jerry, Paul Simon and Art Garfunkel were neighbourhood friends and pop music nuts from the suburb of , who hustled their way into making a single for the independent Big label in 1957. It was called 'Hey Schoolgirl' and it reached number 54 in the . It is difficult now to reconcile the chorus of this song – "Hey-bop-a-loo-chi-bop" – with the man who would later write songs with the depth of 'Bridge Over Troubled Water', the imagery of 'Renee And Georgette Magritte With Their Dog After The War' or the originality of 'The Boy In The Bubble', but everybody has to start somewhere, and in a nod to their past Simon & Garfunkel included it in their set on the ‘Old Friends’ tour they undertook in 2003/4.
According to most accounts, 'Hey Schoolgirl' was followed by a Tom & Jerry album which sank like a stone and which, like the single, was not released in the . The existence of this album in 1957 cannot be confirmed, but in 1967 Pickwick Records in the either re-issued it, or created an album by compiling together various Tom & Jerry tracks, with a misleading contemporary photograph, and added liner notes suggesting that this was S&G's crucial early roots. Simon, aware that a con was being perpetrated, promptly injuncted it and it has remained officially unavailable ever since. (I'm not sure whether the above album was the one but it looks like it might be.)
After Tom & Jerry, Simon continued to hang around 's pop , the , where his offices are now situated, and made records for various small independent labels (Big, , Madison, Amy) under the pseudonym Jerry Landis and with a band who called themselves Tico & The Triumphs. He also used the name True Taylor on a rockabilly single which sounds remarkably unlike Paul Simon. Again, none of these recordings are currently available, though with a little diligence they can be found on bootleg by anyone who is sufficiently interested to seek them out.
Many of these recordings are very similar in structure, based around either the classic doo-wop style made famous by Frankie Lymon & The Teenagers and Dion & The Belmonts, or the common I-VI-IV-V (in the key of C, the chords C, Am, F and G) ballad progression utilised, for example, in Marty Wilde's well known UK pop hit 'Donna' or, in a slight vaiiation, The Beatles' 'This Boy'. The influence of The Everly Brothers, Dion, Buddy Holly and, occasionally, Elvis Presley, is easy to spot. All of them are typical of their era, the late Fifties, when pop was taking over from rock’n’roll and sharp entrepreneurs were using pop music to play on the tender emotions of impressionable teenage girls. It's likely that many of the ballads were written in the hope that they might be recorded by the bland teen idols of the day, singers like Frankie Avalon, Fabian and Bobby Vee.
Although much of this early material might seem very trivial by the standards of Paul Simon's later work, it would be a mistake to dismiss it too lightly. This was Simon's musical kindergarten, his equivalent of The Beatles in , and as he hung around the small s, record company offices and the , as he listened to everything that was going on around him, he learned his trade, the lessons that would stand him in good stead for years to come. He learned how songs are constructed, what is commercial, what is trite and what is acceptable. He also learned about how the music business worked and how to survive and prosper within it, which probably explains why – unlike so many of his contemporaries – Paul Simon has never been involved in ugly litigation over copyright ownership through having signed unpropitious contracts early in his career.
Unlikely as it may now seem, these songs and the circumstances in which they were recorded, were the foundations on which Paul Simon built his career, and since that career has now lasted almost 50 years and shows no sign of flagging, it is safe to say that these were very valuable lessons indeed.
Known Tom & Jerry, Jerry Landis, Tico & The Triumphs and True Taylor recordings are as follows:

Hey Schoolgirl (T&J): A doo-wop workout with snappy chord changes similar to The Every Brothers' 'Wake Up Little Susie'.
Dancing Wild (T&J): B-side of the above, and very similar in style.
TRUE OR FALSE (TT): Rockabilly effort, drawled in a accent.
TEENAGE FOOL (TT): An echo-laden rockabilly ballad not unlike the slower recordings made by Elvis during his Sun sessions.
Our SonG (T&J): Everly Brothers rockabilly style work-out with a neat guitar solo, all about their favourite song on the jukebox.
TWO TEENAGERS (T&J): Dreadfully camp moon-in-June doo-wop number featuring high-pitched girl chorus chirping "So in love" after the title.
(PRETTY BABY) DON'T SAY GOODBYE (T&J): Naïve sentimental song rhyming 'cry' with 'goodbye' on the choruses, with Everly Brothers style harmonies.
THAT'S MY STORY (T&G): Primarily Art wallowing in a I-VI-IV-V style doo-wop ballad.
BABY TALK (T&G): Classic doo-wop rock written song by Jan and Dean, recorded in the style of Johnny Cymbal's 'Mr Bass Man'. Great fun.
ANNA BELLE (JL): A hot rock'n'roll number sung by Paul in the style of Buddy Holly.
LONELINESS (JL): Maudlin ballad.
SWANEE (JL): Cover of well known minstrel/Al Jolson hit by Caesar-Gershwin, c. 1920.
TOOT TOOT TOOTSIE GOODBYE (JL): B-side of above; Al Jolson cover, composed by Gus Kahn, original c. 1922.
I'D LIKE TO BE THE LIPSTICK ON YOUR LIPS (JL): Teen ballad but don't blame Paul Simon for the title – he didn't write it.
JUST A BOY (JL): Limp teen ballad.
PLAY ME A SAD SONG (JL): Soul crooning pop.
IT MEANS A LOT TO THEM JL): Generation gap teen ballad.
ASK ME WHY (JL): Undistinguished romantic I-VI-IV-V style ballad.
I'M LONELY (JL): Shades of future alienation songs on this moody ballad.
I WISH I WEREN'T IN LOVE (JL): Nightmarishly bad lyrics on a sentimental doo-wop ballad bemoaning the horrors of unrequited love.
MOTORCYLE (T&TT): Stunningly original rock'n'roll tribute to two wheeled hot rods, punctuated by the sounds of engines roaring and the kind of doo-wop harmonies that enhanced The Beach Boys' best car songs. Tico rasps the lyrics.
I DON'T BELIEVE THEM (T&TT): Slow I-VI-IV-V style ballad.
WILDFLOWER (T&TT): Bo Diddley beat style rocker whose Spanish lyrics give it a Mexican slant.
EXPRESS TRAIN (T&TT): Train sounds introduce a Dion & The Belmonts style rocker with 'clickety-clickety' lyrics.
GET UP AND DO THE WOBBLE (T&TT): Typical dance track of the era; Simon's take on Little Eva's smash hit 'The Locomotion'.
CRY LITTLE BOY CRY (T&TT): Dull slab of melancholia with Dion style slow start.
THE LONE TEEN RANGER (JL): Hilarious novelty send-up of The Lone Ranger TV show in which Jerry bemoans the loss of his girl to the masked Teen Ranger! Complete with pistol shots, 'Hi-Ho Silver' lyrics and Rossini's William Tell overture! Probably inspired by The Olympics' 1958 hit 'Western Movies'.
LISA (JL): Soft I-VI-IV-V style ballad in which Jerry sends a 'Dear John' letter to the unfortunate Lisa because he's not yet ready to settle down.
NOISE (T&TT): A rocking doo-wop effort about a party where the guests made lots of noise!
CARDS OF LOVE (T&TT): Shang-a-lang doo-wop song with lyrics based on the pack of cards – "You were my Queen, I was your King, then Jack stole you". Ouch!
Fighting Mad (T&J): Everly Brothers style rocker.
SURRENDER PLEASE SURRENDER (T&J): The Everly Brothers meet Buddy Holly on this ballad, with changes not unlike Holly's 'Everyday'.
LOOKING AT YOU (T&J): A fast tempo rock'n'roller.
I'M LONESOME (T&J): Typically slowish I-VI-IV-V style ballad of which hundreds were recorded between 1958 and 1962.
Posted by Chris Charlesworth