This is the introduction I was asked to write in 2009 for a sheet music book of songs popularised by the ‘Forces Sweetheart’, Dame Vera Lynn. It’s not always rock’n’roll that I have to write about… 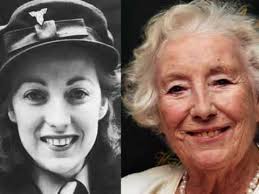 There can be few British entertainers for whom the accolade National Treasure is more appropriate than the much loved singer Vera Lynn whose clear, plaintive voice, profound sincerity and forthright patriotism brought her huge public acclaim during World War II. Rightly, that acclaim rests with her still, and never was this more evident than in 2009 when, at the age of 92, Dame Vera became the oldest living artist to make it to number one in the UK album chart. Three weeks later the CD of best known songs by the ‘Force’s Sweetheart’ went Gold with sales of over 100,000.
Dame Vera was born Vera Margaret Welch on March 20, 1917, in East Ham, in east London. Her father was a local plumber and she developed an endearing Cockney accent which she retained to the end of her days. She began singing at the age of seven in a working men's club and, after joining a dance troupe when she was 15, adopted her grandmother's maiden name for her stage name. Vera Lynn’s earliest recordings were on records released by the popular dance bands of the day, including those led by Joe Loss and Charlie Kunz, and she made her first radio broadcast, with the Loss Orchestra, in 1935. A year later she made her first solo record, ‘Up The Wooden Hill To Bedfordshire’ (a favourite of Ronnie Lane’s), on the Crown label which was bought up by Decca, the label on which her most treasured recordings would appear. After her stints with Loss and Kunz, during which she recorded many standards, she joined the aristocrat of British dance outfits, the Bert Ambrose Band.
Lynn married clarinettist and saxophonist Harry Lewis in 1939, the year World War II broke out, and in 1940 was given her own BBC radio series, Sincerely Yours. The format of the show was designed to appeal to British forces serving abroad, to whom Vera sent messages of good will from loved ones, and she performed a selection of songs most requested by the soldiers. She also visited hospitals to interview new mothers and relay messages to their husbands overseas. Between radio appearances she toured overseas, most notably to Burma, and gave outdoor concerts for soldiers in the field. As a result of this valuable war work she became known as the ‘Forces Sweetheart’, a household name during a time when the population of the United Kingdom was desperately seeking a ray of sunlight to ease the horrors that surrounded them.
Lynn’s best-known song, ‘We’ll Meet Again’, was recorded during the war, in 1942 while making the film of the same name. Its stirring lyrics – “We'll meet again, don't know where, don't know when, but I know we'll meet again some sunny day” – had enormous appeal to those separated from loved ones during the hostilities, and it remains one of the most symbolic songs of the period. (It’s also popular with hardened criminals who’ve been known to sing it to anyone who’s grassed them up. It was played at the end of Led Zeppelin manager Peter Grant’s funeral in 1995, with mourners realising it was Peter’s last joke.)
While WW2 raged Vera Lynn was far and away the most popular female vocalist in Britain, appearing at the London Palladium with the comedian Max Miller, and she even made inroads into America where, thanks to her regular radio appearances her recording of ‘Auf Wiederseh'n Sweetheart’, another song shaded by the sorrow of separation, was a huge hit.
With the war over, Lynn went into temporary retirement but she resumed her career in the fifties and, remarkably, had three separate recordings – ‘Auf Wiederseh'n Sweetheart’, ‘The Homing Waltz’ and ‘Forget-Me-Not’ – on the first ever UK singles chart when it was published in November 1952. Her career flourished in that decade, peaking with ‘My Son, My Son’, a number one hit in 1954. Lynn, who never had a son, only a daughter, co-wrote the song with the trumpeter Eddie Calvert. In early 1960, she left Decca, for whom she had recorded for almost 25 years, and joined EMI, releasing more contemporary songs for the Columbia, MGM and HMV labels.
In 1969, Lynn was appointed an OBE (Officer of the Order of the British Empire) and in 1975 she was made a DBE (Dame Commander of the Order of the British Empire), the first popular entertainer to receive such an honour. A year later she chaired a newly launched charity dedicated to funding breast cancer research, by which time she had largely abandoned her singing career, appearing only at infrequent nostalgic events to mark war-related occasions. These included commemorations for the 40th anniversary of D-Day and the 50th anniversary of the beginning of World War II.
Dame Vera Lynn’s last public performance was in 1995 when she made an emotional appearance outside Buckingham Palace during a ceremony to mark the golden jubilee of VE Day. A decade later she made a surprise appearance at the 60th Anniversary VE Day ceremonies in Trafalgar Square during which she made a moving speech praising veterans of all wars and calling upon younger generations never to forget their sacrifice.
In her own unique way Dame Vera Lynn made an indelible mark on British life. There can be no question that the songs she popularised that are included in this folio will live forever, as will the heroism they inspired.