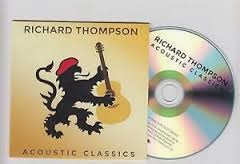 Nimble of finger, droll of wit and bereted of head, Richard Thompson has long been a favourite of mine and this month’s ‘new’ album Acoustic Classics is providing the soundtrack for a few commutes this week. It’s not really new insofar as it features acoustic arrangements of well-known Thompson songs, and to be honest the new versions don’t add much to the old but Thompson’s finger picking is so good that as with just about everything else he’s ever recorded, the album is a joy.
A few years ago Lisa and I went to see Thompson at the Brighton Dome and on the drive home, smarting from having had to shell out £10.40 to park the car for three hours, I was thinking of the right word to describe his guitar playing, and the best one I came up with was ‘meticulous’. And he makes it look so easy too, totally effortless, all those trills and hammer-ons and pull-offs, and twiddly bits, and walking bass parts while he plays a melody on the top strings, and to all intents and purposes sounds like at least two and sometimes three guitarists all playing at once when all he has, like the rest of us, is eight fingers and two thumbs. God knows how he does it.
That show in Brighton wasn’t a rock concert, although towards the end there was plenty of fizz. It was a history lesson in music – 1,000 Years Of Popular Music – in two halves, beginning with ancient songs played by Thompson on the hurdy-gurdy and moving through medieval music, songs of praise, operettas, music hall, jazz & swing, folk, Americana, rock’n’roll and pop and finally a touch of modern dance. He was accompanied on this journey by the compellingly charming Judith Owen on keyboards and vocals and Debra Dobkin on percussion.
The songs ranged from a ballad called ‘Ja Nuls Hom Pris’, written (and sung by RT) in medieval French by King Richard I in 1190 to Nelly Furtado’s ‘Maneater’ which, in spirit of the evening, included a passage sung (in Latin) in the style of medieval church music. The very early music was followed by Purcell and Gilbert & Sullivan, a carol, a sea shanty (‘Shenandoah’ – the only song in the set that I have on record by Thompson), a labour song (‘Blackleg Miner’), music hall (‘I Live In Trafalgar Square’ – loved the line: “If it’s good enough for Nelson, it’s good enough for me”), and that was just the first half.
In the second half Owen and Dobkin added a striking dash of personality to the performance, Owen’s version of Julie London’s ‘Cry Me a River’ a definite highlight, but the key to the show was how one man, armed with nothing more than an acoustic guitar and a black beret, was able to master so many strikingly different and often difficult idioms and shape the results into such a coherent and thoroughly entertaining tour de force. Maintaining a brisk running commentary on the provenance of the songs as he reached the 20th century, Thompson offered up numbers by Cole Porter and The Inkspots before giving way to the more uptempo rhythms of fifties rock’n’roll and country music. Then came hits from the sixties, including a poignant version of The Kinks’ ‘See My Friends’ and the urgent, day-counting whirl of The Easybeats’ ‘Friday On My Mind’. Abba’s ‘Money, Money, Money’ was played for cheap laughs, doubtless because Abba won Eurovision in this same venue back in 1974, while a passage of Nelly Furtado’s ‘Maneater’ was rendered in the fashion of medieval church music and sung in Latin. The thread from past to present thus remained miraculously unbroken.
But back to Acoustic Classics. Thompson varies his solos in several of the songs, notably ‘Walking On A Wire’ which now contains a newly conceived ascending chord flourish, and ‘1958 Vincent Black Lightning’, an all-time Thompson favourite, whose solo after the second verse just seems even more challenging this time around. The same applies to ‘Down Where The Drunkards Roll’ and ‘Valeri’ too for that matter. ‘From Galway To Graceland’, Thompson’s moving song about the devotion of an Irish Elvis fan, is as lovely as ever, ditto ‘Beeswing’. On the negative side I prefer hearing Linda sing ‘Dimming Of The Day’ and ‘Keep Your Distance’ would have been a welcome addition.
Thompson, of course, does a nifty line in Who covers and in amongst all the RT tracks on my iPod are terrific versions of ‘Substitute’, ‘Legal Matter’ and a medley of ‘My Generation’ and ‘I Can’t Explain’, all delivered live on chiming acoustic guitar with plenty of punch, as might be expected from someone who saw The Who at the Marquee in 1965, or so I once read. Finally, if you fancy a work out worthy of Usain Bolt, check out ‘Mother Knows Best’ (from his 1991 album Rumour And Sigh) on which, electric in hand, Thompson really catches fire, playing so fast that, like James Adey on his motor bike, he eventually runs out of road and the song sort of crashes into an oncoming bus.
Posted by Chris Charlesworth

Start following our signals today and earn up to 270% per day.

Delighted that I found your site, fantastic info. I will bookmark and try to visit more frequently.

Nice! thank you so much! Thank you for sharing. Your blog posts are more interesting and informative. moving companies in Winter Park

Thanks for sharing the information