THE WHO LIVE AT KILBURN


It seems logical to follow yesterday’s post with this piece, also from my archives. My comment about the Coliseum 1969 show in the Amazing Journey review seemed to have been acted upon, though I suspect it was just a coincidence. I can’t for the life of me remember for whom I wrote this; maybe I just did it for my own amusement because, as readers of Just Backdated might have figured by now, I do enjoy writing about The Who. 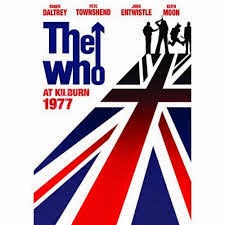 Last week [November, 2008] saw the release of the new Who DVD, Live At Kilburn, which is actually a double package featuring the entire December 15, 1977, Kilburn show and, on a separate disc, incomplete but still substantial footage from the December 14, 1969, London Coliseum show. I picked one up at HMV on Oxford Street on the way home on Friday and, nicely wined and dined, watched the lot on Saturday night in a great big Who blitz that was immensely satisfying. If, like me, you found Amazing Journey lacking in performance footage, then this is what you're looking for.
I wasn’t at either of these shows and reports from Kilburn in the book The Who Concert File, which I edited, and elsewhere indicate the lads weren’t at their best during a concert that was performed and filmed specifically to obtain footage that could be used in The Kids Are Alright. It was subsequently deemed unworthy for this purpose, thus necessitating a second show at Shepperton Studios the following May from which ‘Baba O’Riley’ and ‘Won’t Get Fooled Again’ form the climax to Kids….
At Kilburn The Who were under-rehearsed, a bit drunk and a tad belligerent towards one another. Their on-stage comments indicate a lack of cohesion with Pete commenting that the show was a waste of film, at one point sneering at the audience: “There's a guitar up here if any big mouth little git wants to come up and fucking take it off me!” (dialogue that was retained for Kids…). At one point before 'Won't Get Fooled Again' either Keith or John yell at Pete: “Play the fucking song, Townshend!”
That said, to my mind the show on this DVD isn’t anywhere near as bad as these reports suggest. As I’ve noted many times before, The Who was so good that even on a bad night they’re better than most, if not all, and as I’ve also observed before, often when they were wound up about something it brought out the best in them, especially their occasionally truculent guitarist. So here we have Pete a tad inconsistent, inspired one moment, sloppy the next, but never less than watchable. Roger and John are as professional as ever, of course, and though Keith is a bit overweight he works hard, not wanting to let the side down. For this show he wore that truly dreadful purple spangled outfit, a costume that looks suspiciously as though he'd nicked it from Abba.
However, the real gem for Who connoisseurs in this package is the 1969 Coliseum show. The set was similar to Leeds but some songs are missing, and both ‘Young Man Blues’ and ‘Happy Jack’ from here have already been available in The Kids Are Alright and the Thirty Years of Maximum R&B films respectively. For me, ‘Happy Jack’ was a jewel in the crown of Thirty Years..., concentrating as it did on the way Keith propels the song forward.
Though the footage isn’t as sharp as the Kilburn show, The Who give a towering performance, truly extraordinary, and after a while the fact that it isn’t sufficiently well lit doesn’t seem to matter as the sound has been remixed and the band is on tip-top form, staggering really, with white boiler-suited Pete leaping around in that wonderfully graceful – almost balletic – way he had in those days, Roger coming into his own in his fringed coat, John thundering away stage left and Keith an absolute dynamo, hitting everything everywhere. Of all the many phases that The Who have gone through over the years, this vintage, with Pete on a Gibson SG, is the one I consider the best and as I watched them ripping up the stage on my TV on Saturday night, I was amazed – yet again – that any band could really be this good.
Although I had a stack of Who records by then, it was seeing this edition of the band, playing like this, looking like this, six times between 1969 and 1970 (Plumpton Festival, Dunstable Civic [x2], IOW, Hammersmith Palais, Roundhouse) that turned me into the Who fanatic I became and still am, and reliving it is still a blast.
Posted by Chris Charlesworth

Email ThisBlogThis!Share to TwitterShare to FacebookShare to Pinterest
Labels: Film & TV Reviews, The Who

Chris Charlesworth, always the soothsayer when it comes to the Who (I've read much of your works on the subject). Thank you for cutting through to the truth once again (in this case the joys of Kilburn)