STEELY DAN - The Misery Of Those Early Tours, Part 1

This is an extract from Steely Dan: Reelin’ In The Years, by Brian Sweet, first published by Omnibus in 1994. This week I have been working on an updated edition of the book due out early next year. 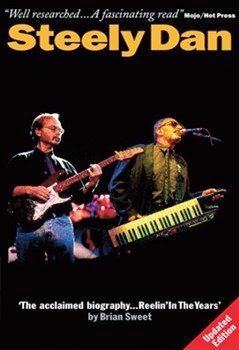 The accepted wisdom of the music industry in 1972 was that to translate success on the singles chart into album sales an act must tour extensively. To this end ABC appointed Joel Cohen, a partner in a company called Kudo III, to manage Steely Dan. Cohen’s previous experience was as tour manager for Three Dog Night, a band for whom the road was their second home.
Although they were totally unprepared for the first tour, Walter Becker and Donald Fagen felt obliged to bow to corporate demands since ABC had given them their full support before and during the recording of Can’t Buy A Thrill. Cohen promptly put the tour theory into practice with a vengeance, managing to secure Steely Dan as opening act for some very big names – and some very surprising names too. “The manager that we had, [he] used to road manage Three Dog Night... that was basically his concept of how things should be done. Constant touring... and singles,” said Fagen. “We weren’t well rehearsed at all. And the tours weren’t well organised. We were always shuttling back and forth from the west to the east coast. He felt we owed it to our singles audience.”
That singles audience had bought over a million copies of ‘Do It Again’. “We had a million-selling single, but an album – that’s where the gold is,” Denny Dias told one journalist. “All the members of this band want to keep on making good records, do bigger tours and get that million-selling album.” Quite whether Becker and Fagen wanted to “do bigger tours” is a matter of conjecture.
In December 1972, Steely Dan were booked to open for The Kinks. They then went on to open for Elton John, The Beach Boys, Uriah Heep, The James Gang, The Guess Who, Black Oak Arkansas, Focus and, most surprisingly of all, British good-time glam-rockers Slade, who were attempting to translate their UK success Stateside.
Fagen, never the most robust of physical specimens, later admitted that opening for heavy metal acts was “very stressful” and that he was “very frightened of the personnel”. He had light-heartedly mentioned in a press biography that he didn’t talk to anyone over five feet eight inches tall, a throwaway comment that soon took on an altogether more ominous meaning.
The point was vividly illustrated on March 30, 1973, when Steely Dan shared a bill with Black Oak Arkansas and Dutch instrumentalists Focus at the Hollywood Palladium. Black Oak were a bunch of good-natured, rowdy, beer-swilling Southerners whose biker-style audience consumed vast quantities of alcohol and other stimulants while bouncers carried unconscious bodies out of the gig by the truckload. The aesthete in Donald Fagen was offended; the scene left him feeling distinctly uneasy.
An incident in South Dakota seemed to encapsulate the reasons why Becker and Fagen loathed road life. Steely Dan were headlining a gig and were in the process of changing over the equipment between soundchecks, when someone stole Jeff Baxter’s guitar amplifier. They knew who the thief was, but couldn’t prove it. It caused much consternation in the Steely Dan camp and Fagen could be seen behind the stage leaning against a power pole with a look of sad resignation on his face.
On another occasion Steely Dan were due to open for The Eagles at an open air concert in the Midwest when a severe electrical storm hit the area in the afternoon. The winds whipped beneath the stage with such force that it buckled upwards with the equipment on top. One piano leg actually pierced the flimsily constructed plywood stage. The storm passed eventually and Steely Dan’s crew checked the weather forecast, only to be told more storms were on the way. Most of the Steely Dan entourage – including Becker and Fagen – thought it was far too risky to contemplate going ahead with the show, but by the time the soundchecks were scheduled the weather had turned clear and sunny. Tour manager Gary McPike was furious, but Steely Dan refused to budge and didn’t play.
Fagen once talked about a gig, where, on taking the stage, he somehow managed to plunge a speaker screw about three inches into his head and bled throughout the set. “It did give a Grand Guignol effect,” he said.
The worst aspect of touring for Becker and Fagen was waking up in a different hotel room each day, and in Becker’s case a particular dislike of being jostled awake much earlier than he preferred in order to travel to their next destination. Fagen hated riding in rental cars, but by the same token he would have nothing to do with the rock’n’roll image of riding in long black Cadillac limousines. Becker and Fagen weren’t seeking money, groupies or adulation; they thought of themselves as working musicians and songwriters, nothing more, nothing less. It was an attitude that most of their hedonistic peers in the rock world did not share.
Steely Dan enjoyed an excellent relationship with their road crew, who took a great deal of pride in their work. But Becker and Fagen couldn’t understand why roadies would willingly subject themselves to a gruelling tour and then come back for more. One day Fagen asked Englishman Jimmy Lewis why he did it. “Our job is to create an environment in which you can create,” he said. The reply stopped Fagen in his tracks and instilled in him a respect for road crews would never waver.
Posted by Chris Charlesworth

By using RentalCars you can discover the most affordable car rental from over 49,000 locations globally.

Start following our signals right now and profit up to 270% per day.