TO KNOW HIM IS TO LOVE HIM 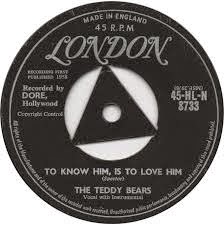 Every so often as I listen to my iPod on my daily commute a song crops up that stops me dead. Sometimes it’s new, sometimes it’s something fairly recent I haven’t heard in a long time and sometimes it’s an oldie that I simply can’t resist. So it was that as I sped through Clapham Junction yesterday morning the opening lines of ‘To Know Him Is To Love Him’ took me back more than half a century.
I would have been 11 or 12 when I first heard this song, the original version by an American trio, two boys and a girl, called The Teddy Bears and I remember well the huge impression it made on me. It is a record that I never tire of hearing, a pop classic, and like so many great singles of the era it was on the black and silver London label. I seem to recall that it stayed on the jukebox in the coffee bar by the Mill Bridge in Skipton for almost all of 1959, and that I played it constantly as I sipped my coke or espresso, forever lost in its wistful charms. Soon enough I owned a copy.
Of course I knew absolutely nothing about The Teddy Bears, who they were, or its producer Phil Spector, but then again neither did anyone else for this was Spector’s grand entrance into the pop world. All I knew was that this record had a depth to it that was delightfully addictive; the haunting melody and confident ascent into the middle-eight (‘Why can’t he see…’), the simplicity and innocence of its lyrics and the slightly reticent delivery on the verses; all this adding up to the kind of recording that made almost all British productions of the period sound awfully clumsy by comparison, lacking sincerity and somehow second rate. It wasn’t that ‘To Know Him Is To Love Him’ was a brilliant Spector production, though it was certainly one of his building blocks, but there was something about the way it was recorded that made it stand out, that made it different, that made it compelling. Well, it captivated me anyway, even though my favourite records in those days tended to be rock’n’roll. Only much later did I discover that Spector, one of the two boys in the group, had taken the title from the words on his father’s gravestone.
Writing about ‘To Know Him Is To Love Him’ in his Phil Spector book Out Of His Head*, my former Melody Maker colleague Richard Williams argues convincingly that, whether intentional or not, teenagers were drawn to the record through what adults might perceive as its imperfections, and that this was the key to its success (number one in the US, two in the UK). “[Annette] Kleinbard’s voice, taking the lead, has a charming artlessness; the two male voices, echoing her in the repetitive chorus (‘and I do and I do and I do and I do’), are hardly more assertive,” he writes. “The flimsy rhythm section could be in a different room. At best it sounds like a demo, and a particularly hesitant one. But that was the beauty of pop music in 1958. It was such a powerful expression of the new teenage consciousness that flimsiness and naivety actually made music more appealing, not less. Annette Kleinbard singing ‘To Know Him Is To Love Him’ with Phil Spector and Marshall Leib in support sounded exactly like the people – immature, unformed, full of tentative romantic hopes and dreams – who would hear and respond to the record when, eventually, it was heard on the radio. Devoid of calculation, it simply was its audience.”
I was 11, going on 12, hardly yet full of romantic hopes and dreams, but this makes perfect sense to me; and it’s just about as perfect a critique of this lovely song as I’ve read anywhere.
Back on the iPod, The Teddy Bears’ recording is actually one of four versions I have of ‘To Know Him…’, with others by The Beatles, the trio of Dolly Parton, Linda Ronstadt & Emmylou Harris, and a rather anonymous instrumental played on electric guitar with wafting strings.
By their standards The Beatles are a bit hesitant, perhaps taking their cue from Spector’s production, and they change the lyrics to ‘To Know Her Is To Love Her’. John, singing lead, could have opened up a bit more on the middle-eight, as he did on the similarly paced ‘This Boy’, but it’s clear they revere the song, John’s sincerity shining through with Paul and George offering equally respectful vocal back-up. This version comes from the Beatles Live At The BBC, and was recorded at the BBC Paris Studio in London on July 16, 1963, but there’s also Beatle versions available on the unofficial Decca Sessions album, recorded during their unsuccessful audition for the label on January 1, 1962, and the (now) pirate Live At The Star Club, recorded in Hamburg on December 31, 1962, when they were gagging to get back to the UK and launch their assault on the world. I had both these on vinyl once but they haven’t made their way on my iPod since I don’t have them on CD.
The version by Dolly, Linda & Emmylou is equally respectful, stately paced, charming too, albeit it a bit long, with a slightly Hawaiian sounding slide guitar solo, and the instrumental track on my iPod is surplus to requirements really. I have no doubt there are many other cover versions out there that I haven’t heard, but nothing, not even The Beatles, can beat The Teddy Bears and how the song seeped its way into my consciousness all those years ago and, like all the very best in pop, stays there today.

* In the autumn of 2003 Omnibus Press published a new edition of Richard’s book that first came out in 1972. Earlier that year, on Monday, February 3, he and I went out for lunch to an Indian restaurant that was close to my office to discuss the book. By a strange coincidence this was the same day/night that the actress Lana Clarkson died from gunshot wounds at Spector’s home in Los Angeles, a crime for which he was subsequently jailed for 19 years to life. So, LA being eight hours behind the UK, at the exact same moment as Richard and I were tucking into our poppadums and onion bhaji, over in LA Lana Clarkson’s body was being removed from Phil Spector’s palatial home and the great record producer was being taken into police custody.

Didn't you find that the chords of the middle 8 were exceptional for a song of that time?