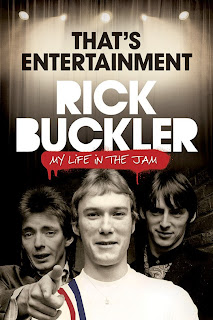 The middle of May marks the anniversary of my washing up on Melody Maker, joining the music industry as an immature but rock-mad lad of 23, so this year I’m celebrating 45 years on the obstacle course that my dear departed friend Derek Taylor christened The Industry of Human Happiness. I’m not sure it’s quite such a happy place now as when Derek spoke those immortal words, though it certainly was when he was in his prime. While it would be going too far to call it The Industry of Human Misery, nowadays it’s more of a sprawling land mass, much of it troubled, and occupied – as ever – by ne’er do wells, by get-rich-quick hawkers of tat (hang your head in shame descendants of Opportunity Knocks), by too many lawyers and accountants, by too many musicians hanging on for dear life, by those who made their pile and by genuinely nice guys whose pile ought perhaps to be a big bigger.
One of the latter is Rick Buckler whom I’ve had the pleasure of working with this year on his autobiography That’s Entertainment: My Life With The Jam, which Omnibus Press published this week. I’ve had plenty of close-encounters with rock stars over these 45 years and few have struck as such an all-round, down-to-earth nice guy as Rick who hasn’t a bad word to say about anyone – not even Paul Weller who, in a manner of speaking, pulled the rug from beneath his feet – and seems truly grateful to all of us at Omnibus for publishing his book. Rick is cheerful, friendly, gracious to everyone he meets, a tribute to his profession.
Last night Rick was at our offices for the book’s official launch – see photo below – and he’s spent all this week helping to promote it, including an appearance on Breakfast TV. 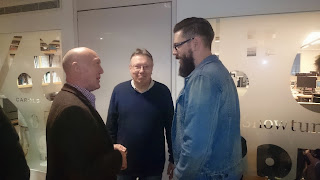 With an introduction by Keith Moon biographer Tony Fletcher who began his life as a writer by publishing a fanzine called Jamming, That’s Entertainment is both an insider’s intimate chronicle of the heyday of The Jam, and a revealing personal memoir. In exhaustive detail, Rick retraces the story of his fifties childhood, one of many kids who went through school dreaming about being in a band. Unlike almost all of his fellow dreamers, Rick got his wish. Rick takes fans through the whole story: growing up in a working-class family in Woking, the early Jam – a covers band who worked their asses off until they got it right – the early records, the competition with the Pistols and the Clash – they were never really punks – through to the glory days and the break-up, then the post-Jam realignments of personnel through a succession of other groups and even a spell as a craftsman-like furniture restorer. It is the story of the dissolution of schoolboy friendships, the highs professional triumphs, the lows of quarrels, and the ongoing influence of a politically abrasive band that for so many music fans dominated late seventies and early eighties British rock.
He was also a damn good drummer as testified by a slew of great Jam songs.

Email ThisBlogThis!Share to TwitterShare to FacebookShare to Pinterest
Labels: The Jam

Being a teenage boy in the States, what I knew of the Jam came from MTV, and thankfully, when the Jam was still intact, theirs were part of the handful of clips MTV showed. Sometime later I learned what more the band had to offer outside of those clips, and I'm glad to hear their rock solid drummer is a Nice Guy.

It's rather shameful that Weller did Buckler (and Foxton too for that matter) down at every opportunity in the weeks and months following the band's disbandment. Just like a messy divorce it's a story where everyone sees things differently; and the wounds are still openly visible nearly 40 years later.