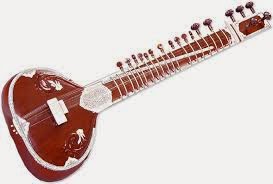 And now for something completely different…
Until very recently the only Indian music I owned was the opening track on George Harrison’s Concert For Bangla Desh, once a triple vinyl album set, now a double CD. Recorded live at Madison Square Garden on August 1, 1971, George introduced Ravi Shankar as his opening act whereupon Ravi and his three accompanists tuned their instruments for a couple of minutes which prompted a round of applause from the sell-out crowd. “If you appreciate the tuning so much, I hope you will enjoy the playing more,” chided Ravi before settling down to play a 16-minute piece entitled ‘Bangla Dhun’.
In my haste to get to the songs by George or, more likely, Bob Dylan (his four songs [five on the CD] are the highlight of the show), I tended to skip past Ravi. That all changed earlier this year when Mrs C and I sort of rediscovered it, in the process kindling a shared but dormant fondness for sitar music. This led to my buying a ‘best of’ Shankar album from iTunes but many of the tracks were duets with the violin maestro Yehudi Menuhin which weren’t really to my taste, so I chanced my arm with a couple of CDs by Ravi’s daughter Anoushka which were nice enough but, to use an Indian analogy, a bit Korma-ish when what I was looking for was more of a Vindaloo.
Help came from my friend Adrian Boot, best known as the music photographer who took more shots of Bob Marley than anyone else, including the one on the front of the multi-million selling Legend CD, who just happens to live quite close to us and plays the sitar. “Although Ravi is the most famous, he is not regarded as the best,” Adrian told me. “The Eric Clapton of the sitar is Nikhil Banerjee. Other good sitar players are Vilayat Khan and Shahid Parvez.”
Adrian sent me a download of music by Banerjee and some others and he’s right. This music is quite extraordinary; long, winding pieces of extreme delicacy, most of them starting slow (Alap) and speeding up towards the finish (Jor), the longest lasting just over 45 minutes, an Indian symphony in fact, meditative and graceful, like watching a leaf floating down a stream or a feather on a breeze. On most of the nine pieces that Adrian sent me, a tabla – a bit like a conga drum but played very fast – joins in about half way through as the pace hots up.
Of course I know next to nothing about the sitar and how to play it but my modest knowledge of the guitar tells me that in terms of fretted instruments the sitar is to Everest as a guitar is to a peak in the Lake District. It can have anything up to 20 strings, not all of which are plucked, and roughly the same number of frets, under which certain strings drone, or resonate in sympathy with the plucked strings. Unlike on a guitar, the frets are rounded and high up from the neck, enabling the player to use vibrato extensively, and its tuning is quite unlike the western 12-note octave which explains why to it can sound discordant to ears attuned to the scales of a piano.
One of the pieces that Adrian sent me, a duet between Ry Cooder and Vishwa Mohan Bhatt from Jaipur, was called ‘A Meeting By The River’ and was so lovely I simply had to get the album of the same name which I’ve also been listening to this week. It sounds as if Bhatt is playing a sitar but in reality it’s an instrument of his own design, which he calls the Mohan Vina, a remodelled f-hole guitar on which a steel rod is used slide-style over what sounds to me like a much depressed alternative tuning. Cooder plays glass bottle neck on the four pieces, all of them spontaneous and lasting around 10 minutes each, occasionally straying into the territory he explored on the soundtrack to Paris, Texas, but more often playing runs that complement the Indian style music. Percussion is added by Cooder’s son, Joachim, on dumbek and Sukhwinder Singh Namdhari playing tabla. 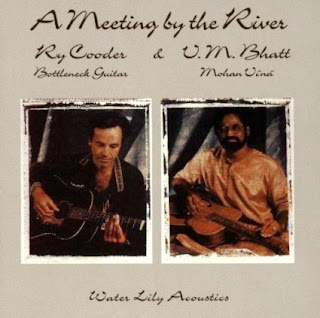 A Meeting By The River is more Korma-ish than Vindaloo, but in some ways can serve as the perfect introduction to sitar music for those too hesitant to try it. It’s highly recommended as a pleasant and surprising change from the music I usually listen to and write about.
Posted by Chris Charlesworth

This was wonderful to read! I am a rock fan, with a particular leaning towards the Beatles and the Who (so I read your blog regularly), and I studied sitar for many years in the 90's and early 2000's. All the players mentioned are incredible and I just want to add my favorite player, Abdul Halim Jaffer Khan, as someone to check out. You can find some examples of his playing on youtube, of course. Thanks for the post and for bringing up some great old memories!

The first sitar concert I saw was Nikhil Banerjee, at least 25 years ago. The sounds he made were like moning whales, he sped up so fast that it put me in a trance and I fell asleep!- I've been an Indian music fan ever since. Check out U.Shrivanas. - Join the Indian music society-they keep you abreast of concerts etc.

As far as comparing guitars and sitars, The sitar would certainly be more difficult - the strings are high above the neck, there are more of them, and more ways to strike/bend them. I heard sitar plyers practice 12 hours everyday, from early age. But I still like the guitar sound too...

I just saw that Nikhil died in 86 - so it was definately more tha 25 years ago! -U. Shrivanus died last year...