In the last of her posts about The Who’s current US tour, Lisa Seckler reports on last night’s show at Forest Hills, the last show of this leg of the tour.

“A Million Little Memories… Join Together With THE WHO”

In order to be a diehard Who fanatic, you need the courage of a lion, the strength of an OX (snicker snicker) and learn to function on four hours of sleep. Whenever they’re in town, the gaggle of Whophreaks stagger around bleary eyed, yet so pumped from endorphins it’s comedic.
Such was the shape I was in today at Forest Hills. 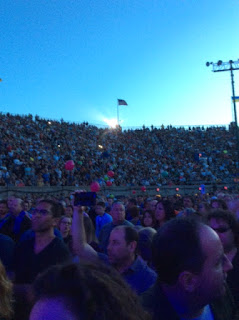 I arrived early – bit of ticket confusion sorted rapidly – and as I entered the arena, the memories came flooding back. The venue is still undergoing some renovation; gone were the New York City Parks signature green painted wooden bleachers, now replaced with aluminum, and all the towers are painted in NY Met Blue. The floor seats are tough-on-your-bottom rigid plastic folding chairs bolted in rows, and what a joy to discover there were no real bathrooms, just Port-O-Sans everywhere (one would think that since the joint’s being renovated, they’d stick some real WC’s in!).
We were brought into sound-check at approximately 5 pm; moments later, the band took the stage. It was then I remembered the lightning strikes occurring during that hellish storm back in 1971. The Oak to the right of the stage was a young’un in ‘71 and it took a direct hit, survived and is now massive. In 1971 the stage was very high, now it’s much lower; the soundboards, uncovered in 1971, were now under tents. Hi-Watts then, Fender amps now, though Simon Townshend is still using Hi-Watt.
Roger, wearing a white Fedora and looking fabulous, was in a great mood. “The last time we played here there was a bit of rain,” brought forth groans. Then he asked for a head count of who was there that time. I and one other raised our hands, prompting Roger to tease us how about how old we are. He asked what was different now, and I shouted that in 1971 the stage was higher, and he came back with a witty retort about my condition that July night.  He used a nickname he had for me, which I will not divulge (cue loud laugh from my son… face palm for me). It was aimed directly at me; no one else would have gotten it.
Pete was in rare form; there were a few issues to sort out with his monitors, he asked for a carpet, at which point he and Roger had a back and forth regarding carpets, shagging, and Austin Powers. I knew then and there it was going to be an incredible show. I’m having a tough time deciding whether Barclays or this one was better. This was the last night of this leg of the tour, and they refused to give in to exhaustion. 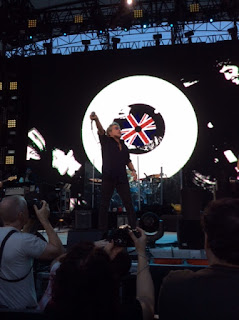 Blasting onto the stage at exactly 8 pm, ‘Can’t Explain’ had the crowd up immediately, followed by ‘The Seeker’ during which Pete displayed some stunning flourishes, feeding the flames of what was to be some of the best playing I’ve seen from him in ages. As stated earlier, he was on fire at Barclays. This was just the beginning.
‘Who Are You’ had Roger cranking up his vocals, growling, rocking back and forth, Pete lunging and whirling, seeing the first of a series of windmills that were to be repeated tonight multiple times, all through the set, thrilling EVERY time.
Roger introduced ‘Kids Are Alright’ with a bit about the song’s history, explaining just how close he came to leaving the band at 19 for family reasons. It changed my whole perspective on a song I love, a much deeper understanding. 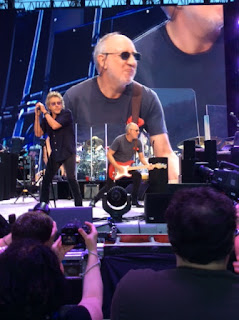 The band kept turning up the heat; it was STUNNING to see. ‘I Can See For Miles’ was next, and absolutely incredible. Zak Starkey. ZAK STARKEY! Slamming those drums. Sounding like nothing I’ve heard since Keith. He was on fire tonight. More about this… further on.
Pete takes the mike, and…. riffs about how much The Who love this city (crowd goes bananas), then launches into one of the best ‘My Generation’s I’ve ever heard, then goes into an amazing jam. It’s important to note, dear reader, that I believe for a long time they were afraid to do this, feeling unable to do so due to some “missing parts”. That is absolutely NO LONGER THE CASE. His fingers were flying all over those frets. Everyone was on board. WHAT JOY!!!!
‘Slip Kid’ had more great lead by Pete and a lot of whammy bar! The whaaaaaaaangawhaaaaaanga after “You won’t blackmail me” was epic!
Anyone who knows the history behind Who’s Next knows it came from a dream project that nearly sent Pete over the edge called Lifehouse. Most of the songs that made up Who’s Next were from this but it didn’t see light of day in its entirety until 2000. The mind-blowing part of this is that Pete’s vision of the future when Lifehouse was a work in progress has all come to pass! I can’t suggest strongly enough if you don’t have a copy of Lifehouse to get your hands on one. Do a “Who-a-Thon” and listen to Who’s Next then Lifehouse right after. It’s an INCREDIBLE experience. For me, tonight, this is when I launched into the ether. Roger absolutely KILLED ‘Behind Blue Eyes’ singing it with such passion I thought my heart would burst. ‘Bargain’ had the entire crowd singing along, with Pete doing some subtle vocal changes that were stunning. 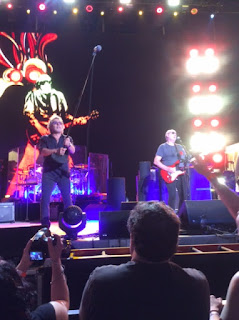 I’m having trouble finding the words to describe ‘Join Together’. Zak Starkey is THUNDERDRUMS. The crowd, the ENTIRE CROWD singing along, all on their feet, Roger prowling the stage with the mike and stand upraised, working the ENTIRE STAGE so all could sing along. This was the second blitz of the evening. The energy in the venue was STUNNING. Ditto for ‘Baba O’Riley’ and ‘Won’t Get Fooled Again’. Hearing these 44 years later in the same venue was an incredibly emotional experience, not of the weepy kind, but as if there was a hole in the space-time continuum; I was in the present, yet it was 44 years ago. What an experience!
‘I’m One’ had Pete’s sweet tenor soaring over the crowd, with Roger playing gorgeous subtle harmonica that was a joy to hear. ‘Love Reign O’er Me’ had Pete adding glorious flourishes. Between those and Roger’s soaring vocals, it was mind-boggling.
‘Eminence Front’ was pretty darn good tonight. I’m admitting I’m beginning to like it after many years. 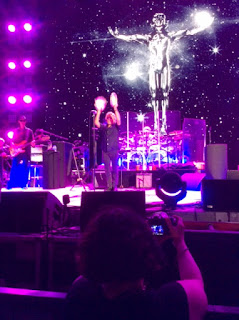 Then there was a really special treat. Tonight, Forest Hills got not only ‘Amazing Journey’, ‘Sparks’ and ‘Pinball Wizard’ but the gift of a lifetime: ‘The Underture’, all 10 minutes of it. I was on cloud nine screaming when Pete launched into the piece. Swirling, lunging, windmilling, dancing! Roger slamming those tambourines. It was so INCREDIBLE, Zak, Pete, Simon, and Roger playing their hearts out. 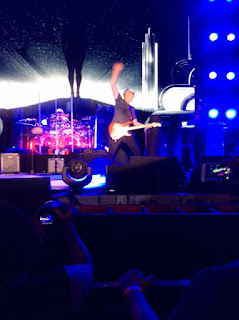 A note to the readers: I’ve seen The Who more times than I can count. These last two shows, at Barclays and tonight at Forest Hills, were nothing less than the most incredible display of musical genius on the part of ALL the players I’ve seen in many years. Those of us, we “Whofreaks” tend to go into a form of withdrawal when the band has downtime, so every “first” show of a new tour always seems great. However, if in fact this is the “last hurrah” far from going out with a whimper, they are ROARING like lions. 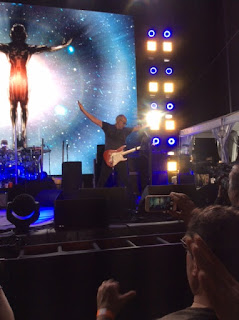 Pete is the happiest I’ve ever seen him. Roger loving it. Simon, Zak, Pino, John, Frank, and Loren… brilliant. 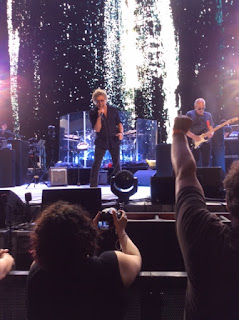 Nice perspective on then (70's) and now. Was lucky to see them in the 60's and 70's around a dozen times, going back to when they took over the Fillmore East for a week in October 69 to perform "Tommy" in its entirety. Long Live Rock, God Bless The Who!

Someone who understands going to 6 shows in 7 days. Very nice write up. LLR

I attended an event here this past October. All I can say about event locations is WOW. We were actually in the side room, which is smaller and a fabulous alternative than the larger spaces available.