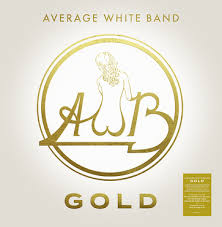 A visit to Sainsburys is never complete without stopping by the CD shelves where, like Ronnie Lane’s dad, I’m looking for a bargain. This week I spot a logo that brings back some happy memories, made up from the initials AWB with the W rounded in such a way as to suggest the outline of a woman’s shapely derriere, a design that might arouse some anxiety in 2019 but in 1974, when it made its debut, caused not a ripple.
Gold, a triple CD set by The Average White Band, offers 45 tracks for £5, or 11.1p per song, which is certainly good value for money but it probably means that after deductions several years will elapse before the boys in the band, whoever they might be today, make enough from it to pay my grocery bill, which this morning amounted to £106.80.
Nevertheless, I stick Gold in my trolley and when I get back home I listen again to ‘Pick Up The Pieces’, the effortlessly catchy instrumental that topped the US singles charts in February 1975, simultaneously sending the album from whence it came, AWB, to the top of the US LP charts as well. Briefly, then, this 5/6ths Scottish and 1/6th English soul/R&B group was the biggest band in the world and as Melody Maker’s man in America in those days it was my job to track them down, which I did. And they turned out to be as genial a bunch of Highlanders it’s ever been my pleasure to ken.
In early 1975 they were living on the tip of Long Island, the densely populated island that extends for 120 miles or so eastwards from New York City. I took the train, through Freeport and Patchogue, and as I chugged along on that crisp February morning I discovered that the farther you travel the less populated the island becomes until you reach the easternmost tip where the rich people live, out in the Hamptons, Great Gatsby land. Here I took a taxi from the station and pulled up outside a grand mansion that belonged to Ahmet Ertegun, the boss of Atlantic Records, and inside, a bit gobsmacked at their good fortune, I found five Scottish musicians and a newly recruited black guy from Brighton called Steve. As I informed MM’s readers, “they play rhythm and blues music with such authority that the majority of Americans think they’re all black musicians. They spend their days kicking a fitba’ around the grounds of one of Ahmet Ertegun’s many mansions, and their nights creating music under the baton of some of the greatest rhythm and blues producers on the Atlantic label.”
I discovered that a family of 13 occupied the house: six musicians in the band, a couple of roadies, three WAGS, manager Bruce McCaskill and one small child belonging to tenor player Malcolm ‘Molly’ Duncan. The big house had a big room, probably intended as a ballroom, where the AWB’s instruments were set up, and I listened to them rehearse for a while before we sat down to talk. They gathered round to tell me their story, which was not without its share of ill fortune, and a week later MM carried my long report about the band and its history, almost 3,000 words, which can be found on the website Rock Back’s Pages should anyone care to look. 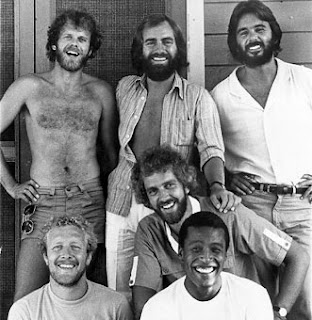 This was the AWB that I knew: back - Alan Gorrie, Onnie McIntyre, Roger Ball; front - Hamish Stuart, Molly Duncan, Steve Ferrone. (Pic downloaded from internet, photographer unknown.)
Realising their fortunes lay in the US, they had decided to settle in the New York area for at least a year and probably longer, and when they weren’t on tour I would bump into them in and around NY’s music clubs over the next 18 months or so. As transplanted Brits, we enjoyed one another’s company but their success wasn’t to last. It rarely did for white bands that played this type of music, no matter how competently, and soon there was strong competition from several US acts – Earth, Wind & Fire, The Ohio Players, Parliament-Funkadelic among them – whose colour was no doubt in their favour with audiences. Still I reckon the guys in the AWB will look back on the spring of 1975 as a once in a lifetime experience that none of them ever regret.
There are two footnotes to my story.
In 1979, back in the UK and working in the press office at RCA Records, I became, briefly, the AWB’s PR when they released an album called Feel No Fret. They were as surprised to see me in this capacity as I was to see them on RCA, and I went to watch them play up in Scotland, headlining an open air event where local fans treated them as homecoming heroes.
In 1990 my photo researcher at Omnibus Press was Mary McCartney, daughter of you know who, and in August of that year she celebrated her 21st birthday with a party at the family farm near Rye to which I was invited, along with a guest who just happened to be the future Mrs C. Among the other guests was Molly Duncan, a pal of Mary’s, whose wife, it turned out, was the proprietor of a small boutique hotel close to London’s Royal Albert Hall. My friendship with Molly briefly rekindled, Lisa and I spent our wedding night there following a small reception in the bar.

The Average White Band are still going, though only bassist Alan Gorrie and guitarist Onnie McIntyre are left from the six I met that February day in Ahmet’s house on Long Island. Hamish Stuart would join Paul McCartney’s band for a period in the late eighties and early nineties, and also Ringo’s All Starrs, while Steve Ferrone became an in-demand session and live drummer whose CV now includes Tom Petty’s Heartbreakers, Eric Clapton, The Bee Gees and a slew of other big names.
But before I finish, let’s revisit the sessions in Miami that produced ‘Pick Up The Pieces’ and other tracks from that super successful ‘white’ album. While there they stumbled on an Aretha Franklin session that was taking place in the studio where they were scheduled to record. “It was the day we arrived,” Alan Gorrie told me. “We were told we could come down and look in on the session and we thought phew... ee. When we got there everybody was just slavering. She was sitting down playing the piano and all our heroes were there in one long line. Tom Dowd was conducting and Jerry Wexler and Arif Mardin were working in the control room.
“We tried to take photographs and couldn’t hold the camera straight. We’d never heard anything like it. When they’d finished all the musicians packed up their instruments and left and Arif said, ‘O.K. You next’. We went in and used the same drum kit, the same amps. It was like being at school or having a kick around at Wembley.”
By the way, ‘… Pieces’, ‘Work To Do’, ‘Let’s Go Round Again’ and ‘Queen Of My Soul’ sound as good as they ever did.