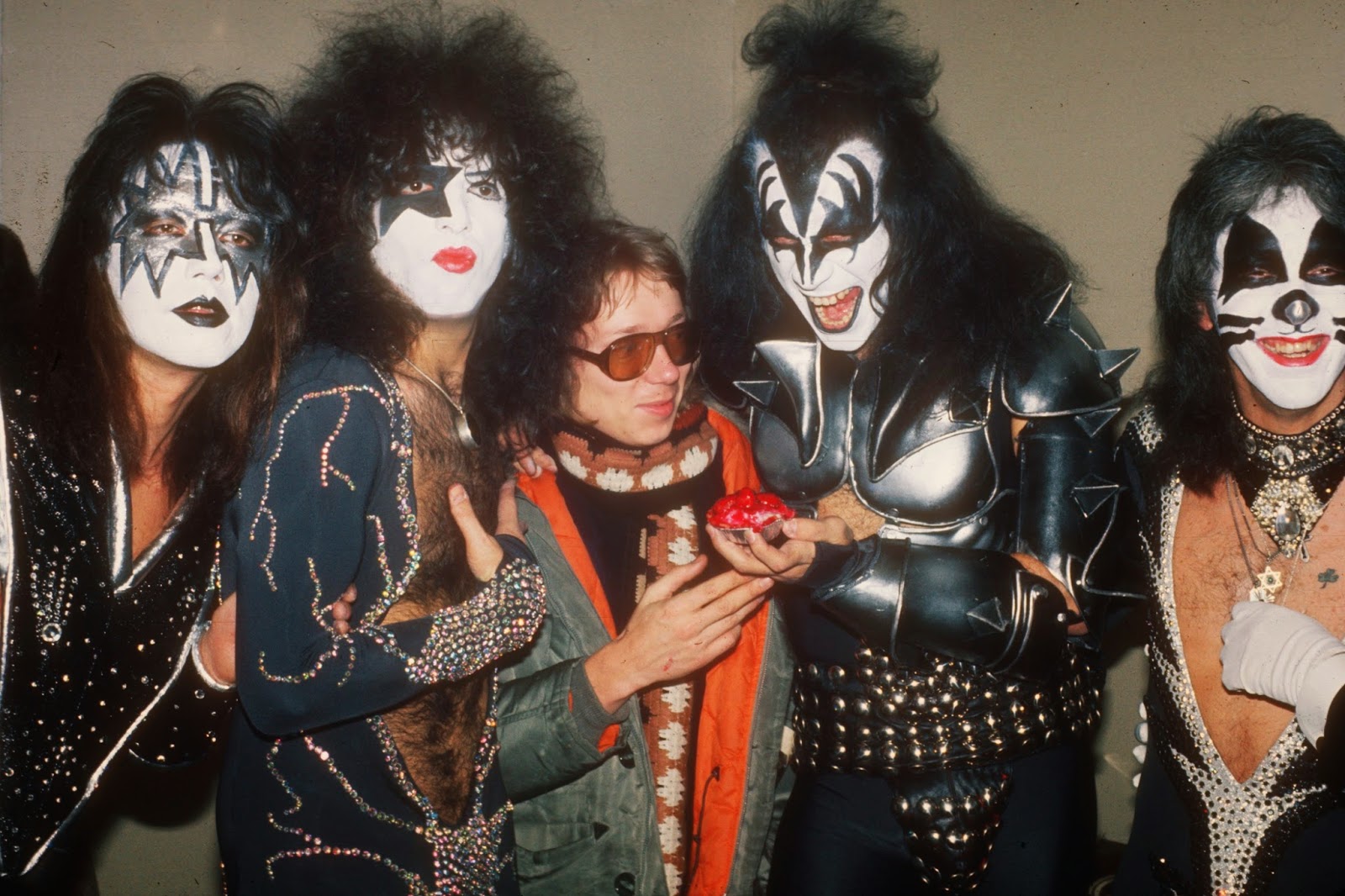 I was never much of a Kiss fan – too much packaging and not enough content for my taste – but that didn’t mean I didn’t write about them when I lived in New York. This was taken sometime in early 1976 when I interviewed them one afternoon during a photo session in the photographer Finn Costello’s studio, hence the costumes and full slap. They wore massive stack-heeled boots and shoulder pads which is why I look so tiny. The photo shoot also involved some big motor-bikes and a model, a tiny blonde girl in a skimpy white dress, and I guess the concept was to contrast her purity with Kiss’ wickedness. I haven’t seen any shots from that session for ages which suggests they’ve been withdrawn, probably for the sake of political correctness though this never seems to have been an issue that ever troubled Gene Simmons.
I also interviewed their manager Bill Aucoin, a very clever man with a background not in music but in marketing. Hanging from a big frame in his office were beautifully crafted metre-high marionettes of the four Kiss guys, possibly a subliminal message to visitors about who pulled the strings in their manager-client relationship. After the interview I recall suggesting to him that because the group was never seen (or photographed) out of character he could have more than one Kiss group operating at the same time, in different parts of the world, like a franchise, assuming he could recruit musicians of similar build, and no one would know the difference. He thought about this idea for a while then dismissed it – but I think I’d inadvertently invented the concept of tribute bands.
The members of Kiss were often seen out of make-up in clubs in downtown Manhattan but there seems to have been a tacit understanding on the part of photographers not to take their pictures. I can’t see that happening now.
A few years ago I was offered the rights to publish an ‘authorised’ Kiss photo book, but the asking price was somewhere in the region of $100,000. I passed. Omnibus once did 32-page ‘unauthorised’ photo book on them with a pull-out poster and we inadvertently included a photo of ‘Gene Simmons’ which was not actually him but a bloke in identical make-up from a tribute band. Easy mistake to make in my opinion…
Posted by Chris Charlesworth

The "chopper" session by Fin Costello with Playboy Playmate Star Stowe. If you're interested the pics are posted here http://goo.gl/aWLCEu about half way down the page.

CREEM actually did publish non makeup pics of the band in 1975 before anybody cared. The guys naively posed and were casual about CREEM taking the pics but when Aucoin heard about it he flipped. KISS guarded their image tightly after that.

Yes, those are the ones, and that's the girl. It got a bit steamy watching the Kiss boys and her with that dress riding up her legs. I had to have a cold shower when I got home :-)

Follow our signals today and profit up to 270% per day.