SHE LOVES YOU - Yeah Yeah Yeah

This morning’s Guardian Film & Music supplement features writers on ‘summer songs’ from their teenage years and the memories they recall. Not to be outdone, and being as how it’s spectacularly warm in London today, I thought I’d jump on the bandwagon. 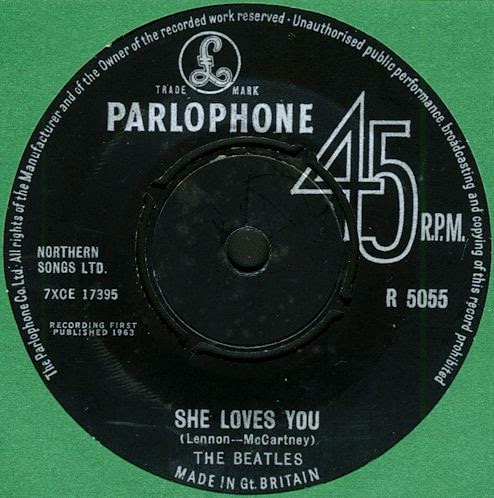 It is September 1963 and I am 16. The glorious summer of The Beatles’ first blossoming is drawing to an end and ‘She Loves You’ is everywhere, on my turntable, on the radio and ringing out from jukeboxes across the land. ‘Please Please Me’ and ‘From Me To You’ have primed us, the newspapers are taking notice, about to invent Beatlemania, and ‘I Want To Hold Your Hand’ is waiting in the wings, ready to deliver the coup-de-grace. So taken am I with ‘She Loves You’ that I have bought the sheet music to learn the chords on my first guitar, a down-at-the-heel acoustic that Santa brought me last Christmas.
For the last ten years I have spent the first week of September with my father in Scarborough, the home of my grandparents from his side, watching cricket from the same seats in the members’ stand at the Valley Parade ground that he and my grandfather have occupied for decades. I love Scarborough, its sea front, sandy beach and Peasholm Park, and I love the carefree atmosphere of the Scarborough Cricket Festival, the friendly way in which the matches are played, the brass band that performs in the afternoons, and the annual apple or orange bowled as likely as not by Fred Trueman after lunch during the first day of the match between Yorkshire and the MCC.
This year, however, I insist on bringing my guitar along and I am struggling to play ‘She Loves You’, slightly annoyed that I have had to leave behind our record player and the single (which I still have) in its green bag on the black Parlophone label. Dad isn’t too happy about this and neither, especially, is grandfather who wholly disapproves of pop music and those who perform it. The son and grandson is beginning to mark his own path and it is awkward. I love them both but ‘She Loves You’ has come between us. The chords aren’t that difficult to play but I cannot sing, never could and never will. Still, I love the way it shifts from major to minor chords and how it opens with the chorus, suddenly and thrillingly, drawing you in from the first roll of Ringo’s drums, a downhill ride all the way. Truth is, I’m smitten with it and I’m smitten with The Beatles. In December dad will take me to see them at the Gaumont in Bradford, a life-changing moment.
My dad loves his cricket. A fine Bradford league player in his youth, each year at Scarborough he turns out for a wandering side called the Little Aston Stragglers who on the Sunday during the festival week play a fixture against the West Riding Cricket Club at the Oriel, Scarborough’s ‘other’, smaller cricket ground. From the age I could hold a pencil I have been recruited to score for the LA Stragglers. It breaks my heart if ever I have to record a duck next to dad’s name but that summer it all changes. Thanks to ‘She Loves You’, pop music now rules my life. And something else is creeping up on me too.
I meet Helen in a bingo arcade on the South Bay seafront on the Sunday of the Festival when I should have been scoring for Little Aston Stragglers at the Oriel ground. To my delight she holds my hand as we walk along the sea front. And she doesn’t mind when I put my arm around her shoulders either. We go part of ‘the way’ in the confined space at the top of the old lighthouse on the end of the harbour wall and arrange to meet again that night when maybe the rest of ‘the way’ will be achieved, or so I imagine, but she doesn't turn up and I never see her again, ever. Thereafter that week, adolescent hormones working overtime, ‘She Loves You’ mocking me, I search the South Bay arcades in vain for my Helen instead of going to the cricket with my dad.
In due course I forget about Helen and I never go to the Scarborough Cricket Festival again, though dad will go for another 20 years or more, long after his dad dies, and still sit in the same seat. I leave school and become a newspaper reporter. I immerse myself in rock and pop, play in a band and in 1970 wind up on Melody Maker. It is a dream job, interviewing rock stars, going to concerts for free. In 1973 Ray Coleman, MM’s editor, sends me to New York to become the paper’s American correspondent. There, and in Los Angeles, I interview John Lennon, maybe even befriend him.
Somehow, whenever I talk to John, I never feel able to talk much about The Beatles. It always seems to me that he’s moved on, and moved on especially so from the summer of 1963, from Beatlemania and ‘She Loves You’. I get the feeling that he’ll not be interested in talking about that period of his life and now, of course, I’ll never know.
The truth is that nowadays I deeply regret that I never got around to telling John about that summer, about Helen and how it took a force as great as ‘She Loves You’ to drag me away from the Scarborough Cricket Festival and into the life of rock and pop music that was waiting for me, let alone seeing him on stage with his old band in Bradford. But whenever I hear ‘She Loves You’ I am reminded of the summer of 1963. After I read the piece in the Guardian on the train to Waterloo this morning I played it on my iPod and, those changes from major to minor once again ringing in my ears, began writing this post. It still sounded as great as it ever did.
Posted by Chris Charlesworth

Chris, that was really a moving, beautiful read. And although we are seperated by an ocean, thousands of miles, and 15 years, our stories are remarkably similar. Substitute the English seaside,She loves you, Helen, and Cricket with the Jersey Shore, Katie, Quadrophenia, and baseball...and our stories with our fathers are identical. Funny, huh?! Amazing how the Ties That Bind (yeah, pun intended, lol) transcend our differences. Thanks, mate, I really enjoyed that!

I think "She Loves You" also ushered in a new phenomena not seen before and of course totally absent today: The B-side. "I'll Get You" on this record and "This Boy" on the next. Tracks which were often as good if not better than the A-side, we awaited with equal enthusiasm. I bet we could name them all even today.

And it just got better and better didn't it? You Can't Do That, Things We Said Today, She's A Woman, We Can Work It Out, Don't Let Me Down - and I never ever figured out whether Strawberry Fields was the A or B side of Penny Lane.

Dunno, but it was the first picture sleeve I ever saw on a single.

Great piece Chris - would LOVE to have played in the Scarborough Festival. Always looked like a small ground with plenty of value; Boycott driving through the covers there would have been a thing of rare beauty! And, Ed, "substitute" your 15 years, Katie and Jersery Shore for 28 years, Sarah and Brighton Beach (including Quadrophenia and cricket at Hove) and you've got the life and times of my University stretch ;-) Benn Kempster

Haha, very cool Benn! Clearly, you, Chris , and me prove that teenage angst, young heartbreak, and father-son turmoil are universal Rock and Roll truths. Certainly, the birthday boy, Mr. Townshend has made a career proving that, lol.