This is adapted from two posts I did last year on Facebook about the live version of Tommy included in the Super Deluxe Tommy package released in November 2013, and now included on Just Backdated in my ongoing endeavours to get all my writings about The Who in one place.
The picture below is the Capital Theatre in Ottawa, as it was in 1969 when the concert in question took place. It was sent to me by Dennis Morgan, from Ottawa, another Who fanatic, and I really love the cars parked outside. 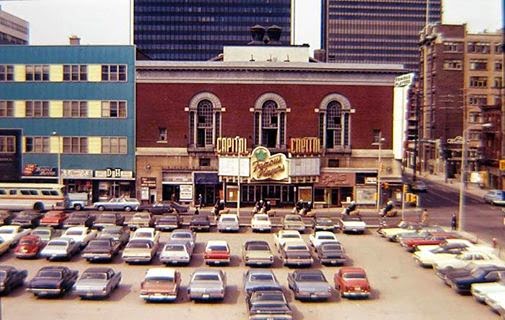 I note from The Who’s website that tapes of a 1969 show from Ottawa have ‘turned up’ in their vaults. If this is the show I think it is (Capital Theatre, Ottawa, Canada, Wednesday October 15, 1969), then a bootleg has been kicking around for years, and a mighty fine bootleg it is too. Many years ago, although I wasn’t certain it was from Ottawa, I wrote about it for some ‘unofficial’ sleeve notes that I circulated privately to friends. Here’s what I wrote…
[The CD]… opens with a preamble from Townshend about Mose Allison, the composer of ‘Young Man Blues’ in which he explains that Allison called it simply ‘Blues’. (Allison’s version is piano led, of course.) This is followed by a truncated Tommy (‘Overture’, ‘It’s A Boy’, ‘1921’, ‘Amazing Journey’, ‘Sparks’, ‘Pinball Wizard’, ‘Tommy’s Holiday Camp’, ‘We’re Not Gonna Take It’/‘See Me, Feel Me’), then ‘Summertime Blues’ and ‘Shakin’ All Over’ (with ‘Spoonful’ insert).
The editing is poor, with beginnings and endings clipped and all spoken introductions lost bar Townshend’s opening preamble, but the playing is phenomenal, perhaps the most impressive versions of ‘Young Man Blues’, ‘Summertime Blues’ and ‘Shakin’ All Over’ on record anywhere, at least to this quality, and that includes Live At Leeds, its unidentical twin Live At Hull, and the well-known, much bootlegged but flawed Amsterdam radio broadcast of September 29, 1969. ‘’ and the ‘See Me Feel Me’ Tommy climax are also first rate.
‘Young Man Blues’ is the absolute highlight of this concert, possibly the highlight of the whole late autumn North American tour, a staggering seven-minute (two minutes longer than Leeds) version in which Townshend plays a truly breath-taking guitar solo, for my money a guitar work-out that ranks with anything I’ve ever heard him play. Moving from chunks of characteristic rhythmic chord playing into lyrical passages and dextrous finger work high up the fretboard, including untypically delicate jazz-influenced phrases, his guitar just sings its way through the song, a master-class in fluency, invention and intuition. On this, ‘Summertime’ and ‘Shakin’’ all of the 1969 Who simply steamroller along like some gargantuan rhythmic noise machine, playing in a manner that is all but a forgotten art these days. To have been there and witnessed this performance in person, with all the athleticism that The Who brought to their concerts, would have been the consummate rock experience.
I believe that in relatively out-of-the-way cities like Ottawa the group felt able to take greater chances than in big US cities where more was expected of them. With less ure, they were more relaxed and this is reflected in the full-tilt approach to improvisation by Townshend, Entwistle and Moon. Vocally, Daltrey brings an enthusiasm to these songs that reinforces my view that he was always a Fifties rocker at heart, and is actually more comfortable with material from this era which he can sing in a deeper timbre than most of Townshend’s original compositions. It’s all the more remarkable when you consider that for the most part, though, it’s just three musicians up there making all this noise, a drummer, a bassist and a guitarist. I’ve seen quintets with two guitarists and a keyboard that sound thinner than this.
The evidence on the CD suggests this recording was made by Who sound engineer Bobby Pridden on one reel-to-reel machine plugged into the soundboard, which explains the bad editing. He would have had to change the reels frequently as they probably lasted only about 20 minutes each (the faster the ips, the better the sound quality but the less time per reel) and in so doing lost bits here and there. This would also explain the missing material – the tapes of the other songs played that night will have been lost or destroyed. Pridden has gone on record as saying that The Who taped scores of shows in 1969 for a possible live album but that Townshend couldn’t face listening to them so he put them all on a huge bonfire in the garden of his Twickenham home and torched the lot. Thankfully, these few tapes from escaped the inferno.

And this led to me writing a subsequent post, below, after I’d got my hands on the live Tommy in the Super Deluxe package referred to in my opening paragraph above. I was accused of (or praised for) conducting a ‘forensic analysis’ in one of the many comments it inspired, which developed into an interesting debate about the merits of various recorded Who shows. I was (and still am) guessing about tapes being lost or destroyed which, barring ‘Young Man Blues’, would have contained the songs that The Who opened with that night in Ottawa – but I detected something fishy going on towards the end of Tommy.

I’ve been listening to the live ‘bootleg’ Tommy from the recent 2013 reissue ‘super deluxe’ package, which was apparently recorded at Ottawa on October 15, 1969, ie the show I referred to in the post here a couple of weeks ago (and now above).
For the most part it’s fantastic, the usual marathon performance, all songs segued together so the audience barely have time to catch their breath between them. The usual self-depreciating introduction from Pete is followed by a stunning ‘Overture’, lovely guitar work into ‘It’s A Boy’ and everything you’d expect from The Who at the peak of their game in 1969. The instrumental ‘Sparks’, with its layered dynamics, sudden octave drops and multiple rising crescendos, is heart-stopping, ditto a fierce ‘Pinball’, ‘Go To The Mirror’ with its ‘Listening To You’ insert superbly rendered, and Pete’s seat-of-the-pants jamming at the very end.
However, for reasons unexplained, when we get to ‘I’m Free’, it’s obvious to anyone with ears, let alone any knowledge of The Who, that this and some of what follows (‘Tommy’s Holiday Camp’, ‘We’re Not Gonna Take It’ but not the coda of ’See Me Feel Me’ – see below) is from a different concert, in fact Swansea in 1976.
As explained by Pete during his introduction, the Ottawa show was recorded simply, with just two strategically positioned mikes. The Swansea show, however, was recorded on Ronnie Lane’s 16-track mobile, so the whole sound from this is different, much fuller. Less obvious but still discernable, especially to those who know their Who, is that the group played differently in 1976 than they did in 1969. Pete was using a Les Paul guitar, which had a sharper tone than the SGs he used on the early Tommy shows, and he improvises more, probably the result of having played Tommy countless times since 1969. Roger’s voice has deepened, improved even, and Keith is more abandoned, using his cymbals more than he did in 1969, perhaps to cover his lack of discipline across the skins. Only John, as ever ill-disposed to change, sounds the same.
Strangely, the 1969 show cuts back in (from the 1976 Swansea show) during the intro to ‘See Me, Feel Me’ – you can hear the bad join – but what follows is taken from the reprise of the Tommy segment within the final song of the night, an extended ‘My Generation’ jam, as evidenced by Pete’s guitar improvisation at the end and the fact that he, Roger and John acknowledge the applause from the crowd after it’s all over (proof that the entire concert, as opposed to just the Tommy segment, ended here), neither of which would have happened after a genuine, mid-concert Tommy recital in 1969. So it’s not really a complete 1969 performance of Tommy after all.
Now I’m not saying these versions of the Tommy songs from Swansea are below par – on the contrary, like the rest from Ottawa, they’re fabulous – but it just irks me that the group and those that surround them have paid so little attention to detail and continuity, not just underestimating fans’ intelligence but trying to mislead them as well. It might be that the tapes from the end of Tommy at the Ottawa concert were compromised somehow (see above review of Ottawa bootleg, and references to bad edits) so there was no choice but to splice on the recordings from Swansea, but it is especially hard to swallow when the bells and whistles version of Tommy 2013 costs as much as it does.
Won’t get fooled again indeed.
Posted by Chris Charlesworth

Absolutely spot on Chris. Adding this to the Tommy Super Deluxe set seemed just like a bit of a sop in my view. I just wish that Pete would have gone with a proposal, similar to mine, which structured a complete re-visit of Tommy around The Pet Sounds Sessions box that The Beach Boys put out. This would have gone back through highlights from every studio tape in existence and could have also incorporated Pete's demos (and unreleased ones), live material (in DVD and / or audio form) from 1969, 1975/1976 and 1989. (I also set out a similar proposal for Quadrophenia which incorporated live material from the last tour, 1996/1997, 1979 and 1973). Charge the earth for it but make the bloody thing worth having. I struggle to understand where the powers that be come up with their scope for release projects these days. Benn Kempster

My only complaint with the Super Deluxe "Tommy" box is the relative lack of involvement by Pete--what made the Super Deluxe "Quadrophenia" box so special was the fact that Pete ostensibly wrote the entire box that came with the box, right down to the photo captions. Back in 1996, a "Tommy" CD-ROM was released; while primitive by current standards, Pete's manifest involvement with that project also gave it something that the Super Deluxe "Tommy" seemed to lack. A minor quibble, I know--but I'm also a proponent of the bonus disc of studio outtakes that came with the 2003 reissue "Tommy", curiously absent here as well.

I think The Who have adopted a 'drip drip' policy for their re-issue programme, always holding stuff back for future releases. They're not alone in this, of course, and it makes good economic sense: why release it all when you can save some for later, thus spinning out the programme and maximising income. Had I known the full extent of what was in Aladdin's cave when I was involved with 30 Years of Maximum R&B I think I could have made it a whole lot better.

Very Nice Post And Sharing With Us And Very Helpful And Intersting Article.
Drum lessons Swansea.

I was 13 years old when I saw The Who at the Capitol Theatre on October 15, 1969. I paid $4 dollars for the ticket. I sat in the third row. A few years later I saw Genesis at Ottawa Technical High School on the first tour of North America. I think the tickets were $5. At 65 it's been a wonderful journey.