I travelled around America so much between 1973 and 1976 that if air miles were collectable in those days I’d never have to buy a plane ticket ever again. Unfortunately they didn’t come in until 1988. One of the oddest airlines was Braniff which operated a sort of loop service where the plane flew around all these Midwestern cities and you just got on and off when you wanted, a bit like the Circle Line on the London tube.
In July 1974 I got off at Pittsburgh to see Eric Clapton and travelled with him for three nights, though he declined to be interviewed. I referred to this little adventure in another post about EC but this is the longer version!
Aside from how incredibly pissed Eric got before and after concerts, the other thing I remember about this trip (and which I mentioned in the other post) was that halfway through the show in Pittsburgh Pattie Harrison arrived and was ushered up on to the side of the stage by Robert Stigwood, Eric’s manager. I knew who she was but couldn’t for the life of me figure out why she was here, though I ought to have guessed from the affectionate glances between her and the chap in the middle with the guitar around his neck. Her liaison with Eric was yet to go public, of course, and had I been the kind of journalist now condemned by the Leveson Inquiry I’d have had a nice little scoop on my hands for the red tops. As it was I kept schtum, which is why I was welcomed by the entourage. My report, lacking any references to la belle Pattie, is below. Extra-marital relationships weren’t the stuff of the music press in those days. On this tour he looked a bit like this picture, the cover of a bootleg I found on the internet. 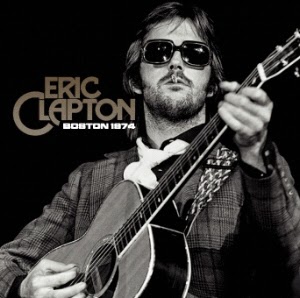 PITTSBURGH, PA. – The tint on the TV screen gave the newscaster a peculiarly reddish face, almost as if he was genuinely excited about the news item he was reading.
“The Eric Clapton show at Three Rivers Stadium,” he was saying, “is the largest gathering of people ever in Pittsburgh. Upwards of 42,000 rock fans have assembled there overnight for the evening’s concert. The attendance is higher than the previous record at Three Rivers Stadium which was held by the British rock group Led Zeppelin who drew 38,000 in 1972.”
“For the uninitiated,” he added as an afterthought, “Eric Clapton is considered by many to be the world’s greatest rock guitarist.”
Among the uninitiated was the taxi driver who brought me from Pittsburgh International Airport to the centre of the town earlier in the day. As we passed Three Rivers Stadium in the cab he turned around, muttering something about the traffic jam. “Who is this guy?” he asked. “Some kind of hero?”
A few moments before the news item appeared on television, the world’s greatest rock hero was experiencing some frustration in discovering the whereabouts of The Band, who were also playing on his show that evening, but were staying at a different hotel. Each time he asked someone they’d reply something along the lines of, “right here, Eric.”
“Not my band, THE Band,” he’d say, a trifle exasperated. “It’s Robbie’s birthday today and... there’s gonna be some bovver tonight.”
The Three Rivers Stadium at Pittsburgh is normally used by the Pittsburgh Pirates, the local baseball team. The Pirates’ fortunes have waned of late, lost matches and subsequent lost revenue, so this year they opened their massive arena to rock to boost the team’s income.
As usual, The Band put in a flawless performance, Rick Danko’s bass playing coming over tremendously vibrant in the open air. It’s difficult to see them from over 100 yards distance (someone thoughtfully provided Eric with binoculars), but the music spills forth with that effortless Band precision.
Then Clapton walks to the stage, acoustic in hand, followed by his group and preceded by Legs Larry Smith, the English country joker hired to act as “compere”, specifically to play down the superstar angle that Eric would like to shake off. That’s one of the reasons why Yvonne Elliman has been recruited to his band, her main contribution to the set coming early on, during the only pre-rehearsed segment, the acoustic songs. Eric opens the show with ‘Smile’, the old standard written, oddly enough, by Charlie Chaplin that comes as something as a surprise on first hearing but seems more and more apt after continued hearings. It sends out a message of good vibes from the start – ”Smile, when your heart is achin’” – and quietens down an audience eager for hi-power rock.
‘Smile’ moves into ‘Let It Grow’, another easy going acoustic song with Eric and Yvonne singing harmoniously together and George Terry turning in filler licks that gain Eric approval between verses. Slotted hurriedly in at Pittsburgh was a spontaneous ‘Happy Birthday’ for Robbie Robertson who was standing at the side of the stage. Its significance was lost on the crowd.
But rock was what the 42,000 had come to hear, even though their appreciation was shown in odd ways. During ‘Blues Power’ Eric was hit hard on the side of the face by a well-aimed missile. It turned out to be a New Testament, wrapped in a small chain with a message from the local Jesus freaks. Not knowing what had hit him, Eric fumed for a bar, picked up the tune again and bellowed his disapproval down the microphone. Much of the set is derived from Eric’s new album 461 Ocean Boulevard, with ‘Motherless Children’ and ‘Mainline Florida’ offering ample opportunities for the band to stretch out.
The set ends with ‘Little Queenie’ and a re-appearance of Legs Larry Smith who smashes a plastic ukulele in the manner of Pete Townshend, hurling the debris out into the crowd. By this time they are crammed tight against the raised, temporary stage. For an encore, Eric steams into ‘Crossroads’ and produces some of the most exciting music of the night.
The following evening’s concert in Buffalo, a half hour flight away, wasn’t up to the same standard. Again The Band were on the bill and again over 40,000 fans jammed a baseball stadium. Clapton’s immediate impact was taken away when he chose to go up and jam with The Band on their last number, ‘Stage Fright’, and the result was far from spectacular.
When it came to his own set, Eric surprised everyone – including his band – by opening with an acoustic rendering of ‘Crossroads’ before moving into the rehearsed schedule. The highpoint of the set was during ‘Have You Ever Loved A Woman’ when Freddie King (flown in specially) arrived on stage to jam. King was superb and a rather lazy Eric allowed him to steal the show instead of competing in a guitar duel. Sunday’s concert was at the Roosevelt Stadium, just outside New York and 30,000 turned up.
The Roosevelt show was a vast improvement on the previous evening, with Eric in a more serious frame of mind, running through the same set as before. Again, Freddie King came on for ‘Have You Ever Loved A Woman’, but this time Eric matched him lick for lick in one of the most impressive blues duets I’ve ever seen. At one stage third guitarist George Terry gave up in a resigned fashion, taking off his guitar and retiring backstage to allow the masters to continue uninterrupted.

I was at the Roosevelt Stadium show. Good musically, up to the point where it was cut short because some idiots were throwing stuff up on stage.

I was at the Roosevelt show too -Clapton seemed pissed off, drunk, and disinterested. It was a short show that nearly produced a riot.
He slurred the lyrics of let it rain and missed some completely. I saw him a month later --completely different show and vibe

I perused a part of stuff and i found that the way of composing to clearing that precisely need to say was exceptionally great so i am awed and like to come once more in future. Free events today near me