CAROL CLERK - Damned By One Of Their Managers

Five years ago this week I sent an e-mail to the music writer Carol Clerk inquiring why she hadn’t delivered a promised update to her Hawkwind biography that had been due in the first week of January. Carol was always punctilious with delivery dates, never late, a superb professional, so it was unusual that it hadn’t been delivered on time. She called me back the same day, explaining that she’d been a bit under the weather healthwise but would try and deliver the update text by the first week of February.
It never arrived. Carol died from breast cancer about six weeks later, on March 13, 2010, having told no one outside of her immediate family the truth about her illness.
Carol wrote four books for Omnibus Press, on The Damned, Madonna, Hawkwind and The Pogues, and over the next few days I’m intending to post extracts from the last two as a tribute her. Firstly though, a story about her now long out of print book on The Damned. 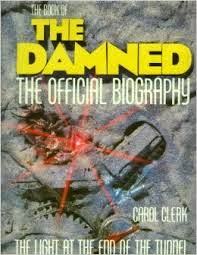 As might be expected of these chaotic punk pioneers, they went through many managers, one of whom was alleged by a certain member of the group to have absconded with the proceeds from a tour. This story found its way into the book and a few weeks after its publication we received a letter from a law firm that represented the manager claiming this was untrue; it was a serious libel that had defamed his character, they claimed, ruined his reputation in the music industry and made it difficult to continue working in this field, or words to that effect. The lawyer demanded substantial damages, the withdrawal of the book from sale and a public apology printed in the music trade publication Music Week.
The letter landed on my desk with an unpleasant thud and after I’d conveyed its contents to Carol we considered its implications and what to do about it. Unusually, the lawyer’s offices were in Southend, not the West End or City of London where most lawyers involved with the music business are located. Carol and I decided to call the only person we knew who lived in Southend, our friend Will Birch, the former drummer with the Kursaal Flyers and The Records who’d moved into music journalism, and inquire of him if he knew anything about the manager who was making this complaint.
“Oh him, he’s a right ol’ ducker and diver,” said Will, “terrible reputation for ripping off musicians.”
“And what’s he doing now?”
“He’s running the hot dog stand on Southend bus station.”
“So he’s left the music industry.”
“Oh yes. No one would touch him with a barge pole.”
“Thanks Will.”
Carol and I composed a response to the lawyers in Southend which went as follows: “We understand your client is now involved in the catering trade, specifically a fast food outlet located in Southend bus station. In view of this we consider the suggestion that his reputation in the music industry has been damaged to be unlikely. Accordingly, this matter is now closed.”
We never heard back from them.


Tomorrow: How Lemmy was sacked from Hawkwind – and how he took his revenge.
Posted by Chris Charlesworth

Totally excellent!!! Mega thanks for this, Chris.... she had, incidentally, started the interviews for the Hawkwind update... But her illness took its toll xxxx Nigel

Great story, Chris. I loved that Hawkwind book. Left it in some magazine office ages ago, though. Just bought it on kindle.