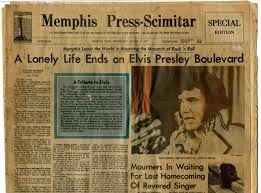 Eighty years ago today at shortly after four in the morning Gladys Presley gave birth to twin boys at her home in Tupelo, Mississippi. The first child was stillborn but the second, who arrived about 35 minutes later, survived to become America’s most popular singer ever, one of the most successful recording artists of all time and a man who, though it was never his intention, changed the world for the better.
When Elvis died, 42 years later, I heard the news in the offices of Pete Rudge’s Sir Productions on 57th Street in New York, the whole staff gathering around the radio to listen. It was August 16, 1977, and before I left work I called a friend who lived in Memphis and asked him to send me five copies of that day’s Memphis Press Scimitar, the city’s daily newspaper. The memorable headline read: A Lonely Life Ends on Elvis Presley Boulevard’. The day the papers arrived I was walking along 57th Street carrying them when I bumped into Ray Davies whom I knew through having interviewed him for MM. We talked about Elvis a bit and I showed him the newspapers. He seemed very interested and asked if he could have one, so I gave one to him. I gave away two more to friends and still have the other two.
Elvis changed my life insofar as his was the first music that really excited me, and that led to a career writing about it. Elvis is generally regarded as the King of Rock’n’Roll but in reality his work stretched across every area of popular music: ballads, country, R&B, soul, blues, pure pop and even light opera if you consider ‘O Sole Mio’ (aka ‘It’s Now Or Never’) which was written in 1898 and also recorded by Pavarotti. My favourite Elvis songs are ‘Mystery Train’ and ‘Suspicious Minds’, but instead of writing about these pretty obvious choices here’s a list of ten others, some not so well known, that I also love.

YOU’RE A HEARTBREAKER (1955)
Young Elvis at his frolicsome best, a joyful blend of country and rockabilly. With a spring in his step, he and his Sun crew create a new genre. I particularly like the way Scotty shifts to the off-beat on the middle eight.

RIP IT UP (1956)
The best way to understand why Elvis was light years ahead of Bill Haley & The Comets is to listen to their respective recordings of this song by Bumps Blackwell. Elvis tears into it like he means business, like it really is Saturday night and he feels fine, and the ball really is jumping, while poor old Bill Haley just shuffles along like his Saturday night will end with a whist drive and a cup of Ovaltine before the pillow beckons. Little Richard’s original version is pretty good too, but I’ll take Elvis every time.

ONE NIGHT (OF SIN) (1957)
This was the original title of ‘One Night’, as recorded by its writer Smiley Lewis, but this was too risqué for the fifties, so Elvis toned it down to ‘One Night (With You)’ on his recording, released in January 1957. The unadulterated version, with Elvis as sexed up as anywhere else in his catalogue, remained in the vaults until 1985 when it appeared on a CD compilation called Reconsider Baby. No wonder the girls screamed.

YOUNG AND BEAUTIFUL (1957)
One of Elvis’ loveliest ballads, as sincere as anything he ever recorded and for my money far better than the more well-known ‘Are You Lonesome Tonight’ which is taken at the same slow tempo. From the Jailhouse Rock soundtrack. I also have a stunning live version of this song by Aaron Neville.

FOLLOW THAT DREAM (1962)
I hadn’t paid much attention to this song until I heard Bruce Springsteen perform it at Wembley Arena in June 1981 on his River tour. As Bruce explained, Elvis followed his dream and this gave it an importance beyond its rather lightweight pop veneer. At just over 90 seconds, it’s very short and sweet but Elvis sings it with consummate professionalism, a pop master at work.

TOMORROW IS A LONG TIME (1966)
This cover of an early Bob Dylan song appeared on the otherwise worthless Spinout soundtrack album in 1966, recorded on May 27, 1966, at RCA’s studios in Nashville during sessions for the gospel album How Great Thou Art. Elvis was taped singing two verses of ‘I Shall Be Released’ too, and like the only other known recording of Elvis singing a Dylan song – ‘Don’t Think Twice It’s Alright’ – it was the product of a spirited jam session. When I worked for RCA between 1979 and 1981 I suggested to the A&R department that unedited versions of these songs might make a decent double A-sided 12” single or an EP called Elvis Sings Dylan. No one was interested.

LONG BLACK LIMOUSINE (1969)
This morality tale takes on greater meaning in the light of its autobiographical symbolism. Opening with an ominous tolling of what appears to be a monotonous funeral bell, it's the story of a girl who’d left behind her poverty-stricken background to find riches but paid the ultimate price for her sins. Elvis’ intense vocal turns the song into a kind of Biblical parable, his voice weary and despairing, perhaps drawing an analogy between his own life and, morbidly prescient, the way it would end.

I JUST CAN’T HELP BELIEVING (1970)
By Barrie Mann and Cynthia Weill, Elvis in pure pop mode. The live version I have, on his 70s Masters set, finds him in wonderful voice, missing a beat on the first verse and then, for reasons unexplained, acknowledging a burst of applause that inspires him to a great performance.

ALWAYS ON MY MIND (1972)
Another heartfelt vocal performance and surely aimed at Priscilla whenever he sang it live. This was Elvis’ last release of 1972 coupled ‘Separate Ways’; a country song first recorded by Gwen McCrae that same year. The Pet Shop Boys released a version of the same song in 1987.

DANNY BOY (1976)
Elvis tackles ‘The Londonderry Air’ with both respect and reserve. This is proof positive that towards the end of his life, when his health and personal life was falling apart, he could still summon up those extraordinary vocal skills when he was sufficiently inspired by a beautiful melody; a master singer indeed. Lovely background vocals too.
Posted by Chris Charlesworth

That’s a terrific list Chris, one that does The King proud. If I were to add one more song I’d suggest his cover of Chuck Berry’s Promised Land that was recorded at Stax Studios and released just after his 40th birthday. Although Chuck’s original and Johnny Allen’s cover are both wonderful it’s Elvis who captures the song’s spirit best I feel. Rather like ‘Follow That Dream’ the story about the ‘poor boy’ travelling across the USA from Norfolk, Virginia to the promised land of LA/Hollywood/California takes on an extraordinary resonance when Elvis relates it. Great playing from James Burton and co as well.

I can remember the astonishment at the time that 40 year olds could still rock out. Over 40s rocking! The very idea…

Guitar Man does it for me!