My first ever post that has nothing whatsoever to do with music. Sorry about that, but I don't see why I shouldn't use my blog to complain about something I don't like! 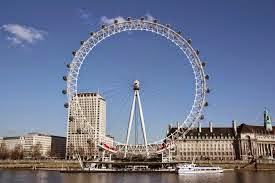 I was dismayed yesterday to read that following its annual January maintenance the London Eye will henceforth be known as the [insert name of American sugar-based, tooth-rotting drink that is an anagram of Lacococa] London Eye, its proprietors Merlin Entertainment having concluded a sponsorship deal with the manufacturers of said fluid.
My first thought was why does the London Eye need sponsorship? I was always under the impression that this was a particularly successful tourist attraction and that the ticket fees alone were sufficient for it to remain a viable and profit-making concern. Then of course I realised that Merlin Entertainment is probably a corporation controlled by greedy fat cats, so they and their shareholders will welcome all additional income no matter its rotten source.
It now seems that all references to the London Eye will be preceded by the name of the sugary drink, that the staff on the Eye will wear clothes emblazoned with its logo and that each individual pod will carry advertisements for it, as will the tickets, its website and everything else. Finally, instead of being blue at night it will now be illuminated by red lights that are the colour of the drink.
It is instructive that although Merlin Entertainment concluded their deal with the sugar-drink company last September news of it seems to have been kept under wraps until a couple of days ago. No doubt they were aware there would be a backlash, that health groups would express concern, so delaying the news was a case of, ‘Well, it’s done now, too late to change it’; a fait accompli, in other words.
So what next: a hamburger chain sponsoring London Zoo, a diamonds manufacturer sponsoring the Tower, that Swedish build-you-own-furniture company sponsoring Buckingham Palace, being as how the royals always seem in need of a bob or two? And why is it called ‘sponsorship’? It’s blatant advertising pure and simple.
As you can tell, I don’t like this. In the past whenever visitors to London have asked me to recommend something to visit I’d always referred them to the Eye, having been on it a couple of times myself and enjoyed the experience. Well, this will now cease. I will not recommend the Eye to anyone. Neither will I ever preface mention of the London Eye with the name of the sugar-based potion.
Please do likewise and share this.
Posted by Chris Charlesworth

It always did have sponsorship, I know when I went on it in 2004 and 2006 that it was branded with British Airways insignia. I agree though that prefacing it's name with a soft drink is pretty awful though.

How American of it. We have fried-chicken-sponsored football, etc. But the Stones had the first sponsored stadium tour, with Jovan, breaking that terrible commercial turf/turd. The difference is in the level of sponsorship. The poor Eye has got itself a title sponsor that requires a big promotional package. Seeing red? Perhaps they will get the preferable "Mexican" version, which contains real sugar and not corn syrup. Blah.

Looking to join additional affiliate programs?
Visit this affiliate directory to look at the ultimate list of affiliate networks.