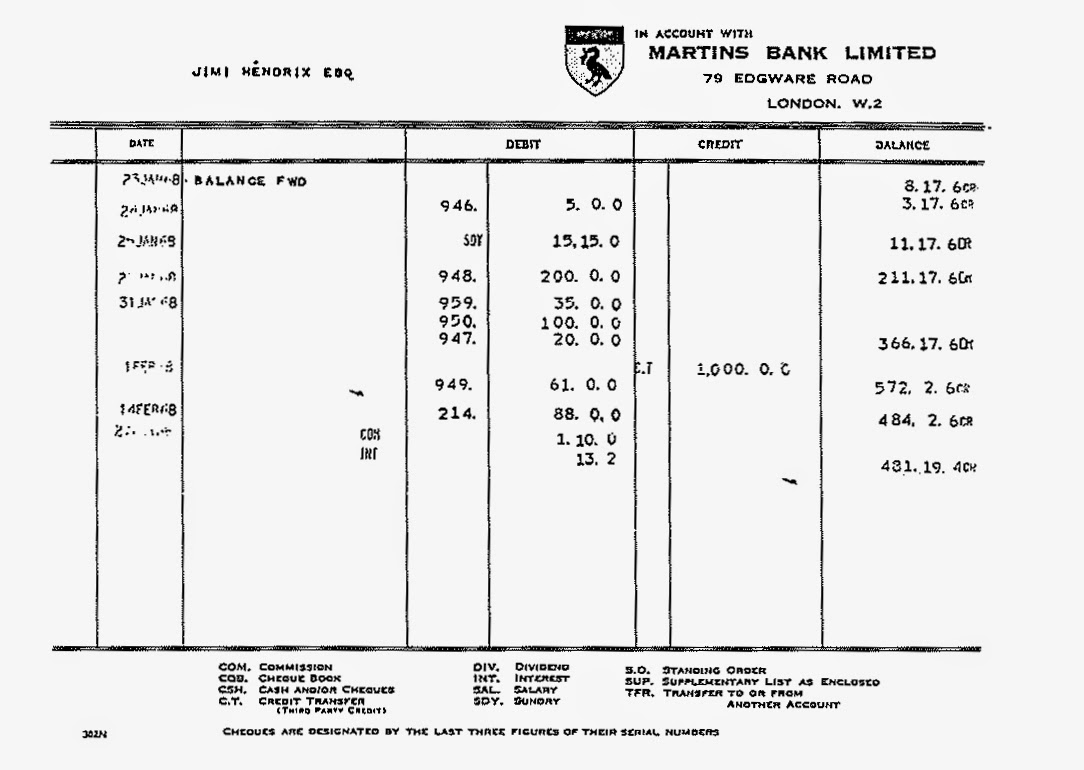 New Year bank statements that reveal the full horror of overspending at Christmas are always uncomfortable so imagine how Jimi must have felt to learn that he had just £8 17/6d in the bank on January 23. Fortunately £1,000 landed in his account in mid-February, by which time he was £366 17/6 overdrawn, which probably sent a chill up the spine of the manager at Martins Bank in Edgware Road. After all, these rock stars can’t be relied upon to bank their income regularly.
More seriously, this document does disclose the pitiful state of Jimi’s finances in early 1968 – after he’d been a big star for at least 18 months – and suggests that someone somewhere was probably raking it in off his back. Tony Brown submitted this for inclusion in his Hendrix Visual Documentary book but never told me where he got it.
Posted by Chris Charlesworth

Martins Bank Archive are currently looking for the copyright holder of this statement at www.martinsbank.co.uk (go to branches and choose London, 79 edgware Road)

he was being robbed completely by that crook that we all know.

Jimi had only been a "big star" since Monterey in mid 1967, and a minor star on the rise for about 6 months before that. He was certainly not a big star or any kind of star in mid 1966. He only arrived in England in late 1966 and then had to form his band and record an album before anyone in the general public had ever heard of him. Still this bank statement is depressing because he already had 2 fantastic albums out by the end of 1967, and had toured Europe, so for him to be broke in the new year of 1968 without any extravagant spending really is outrageous.