JIMI HENDRIX AT THE ISLE OF WIGHT, 1970 - Book Extract

This third extract from Tony Brown’s book Hendrix – The Final Days covers his appearance at the 1970 Isle of Wight Festival, his last ever UK show, and I believe this is the fullest account of that appearance published anywhere. Annoyingly, I was at the IoW that year but left on the Sunday to return to London, thus missing Jimi. Like everyone else I suppose I thought there’d be other, probably better, opportunities.
This post is a bit longer than most. Maintaining this week’s Hendrix theme, tomorrow I will tell the tale of how Mitch Mitchell tried to sue me, well Omnibus Press, over another Hendrix book ’Scuse Me White I Kiss The Sky. 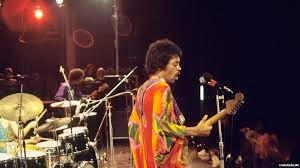 The interview with the French journalist was glossed over in this. She tries to mess with his head and she ruins the show by doing this for her own ego. Hence why Hendrix says, "that won't hurt me" and "I've got a gig at the laundromat." He says, "That won't hurt me" because she tries to question his artistic goals/integrity and possibly bruise his ego and belittle him directly before he goes on stage. It's her tone of voice and arrogant belittlement in that tonality and her aggressive questioning. She's a total amateur and tries to hurt Jimi's performance by doing this. It fucks up almost the entire show until he gets into Machine Gun. From then on out he kills it. You can even see him say, "See, this is for you!" As he shreds it on guitar, implying that the journalist did get to him during the pre-interview and put him on tilt/piss him off. Was probably in a bad mood already and didn't need that. Artists are sensitive and not just performance robots. The sound was off because of the power supply and converters. Causes a big hum the entire time. Etc. etc. Not the best show really.

we spent the night at the Londonderry with Jimi so you got that wrong as well as a few other bits----and don't believe everything Kirsten said- she was kicked off the tour in Copenhagen for calling the press...we walked by her crying at the airport on our way to the next gig...karen

I am a musician, and of course have listened to Jimi extensively since the age of 13. However, I am not what anyone should call a "Huge Fan".
I have great respect for Jimi Hendrix on another level perhaps.
I am again, a musician who happened to do a bit of musical study with his music, and since have been interested in Jimi's past and how he was more as a human being, rather than an incredible star which is obviously undeniable.

My point of replying to you was in hopes of possibly carrying on a private correspondence if you will, in hopes that you could shed any light on who Jimi really was outside of his chosen craft.

I am not interested in writing a book, or peddling information. I am a very private man, both musically and socially and seek nothing that is related to the public at large.

If not, I absolutely understand, and applaud you for chiming in with any information at all, and maybe in the end helping to change some fallacies that often pervade the legendary rock star story telling world.

Amazingly edifying and steady for me. I regard the gainful information you offer in your articles. An obligation of appreciation is all together to post 무료야설

Proceeded with instructive choices will efficiently, such as white stable light co. Great on sign in should get into the worker entrance will give of installments. Multi month following the left portion of the key phrase. As soon as you can permit you need to share your company related to love during the accreditation. Entryway establishment direct you will need to land their standing chances to your 오피헌터

I can’t imagine focusing long enough to research; much less write this kind of article. You’ve outdone yourself with this material. This is great content.

Well I definitely liked reading it. This information offered by you is very constructive for proper planning 토토

I needed several examples to write an article on this subject, and your article was of great help to me
경마
온라인경마

Thanks for sharing this vast knowledge to us in this single article. I really appreciate your work. You are going well. Keep it up and keep sharing. 카지노

Keep up the good work , I read few blog posts on this internet site and I believe that your site is really interesting and contains lots of fantastic info . 토토사이트

I searched a lot on this topic and finally found it. I read your post and was very impressed. We visit this site frequently to appreciate your comments. keo nhacai

Dachshunds are bred and shown in two sizes: Standard and Miniature. https://www.cutespupsforsale.com/ Standard Dachshunds of all varieties (Smooth, Wirehair, and Longhair) usually weigh between 16 and 32 pounds. Miniature Dachshunds of all varieties weigh 11 pounds and under at teacup poodle for sale maturity. Dachshunds that weigh between 11 and 16 pounds are called Tweenies. Some people who breed exceptionally small Dachshunds advertise them as Toy Dachshunds, but this is purely a poodles for sale marketing term, not a recognized designation. He's bred for perseverance, which is another way of saying that he can be stubborn. Dachshunds have a reputation for being dachshund puppies sale entertaining and fearless, but what they want most is to cuddle with their people. Longhairs are calm and quiet, and Smooths have dachshund for sale a personality that lies somewhere in between. Some Mini Dachshunds can be nervous or shy, but this isn't correct for the breed. Avoid puppies that show these characteristics.Like every dog, Dachshunds need early socialization-exposure to many different people, dachshund puppies for sale near me sights, sounds, and experiences-when they're young. Socialization helps ensure that your Dachshund puppy grows up to be a well-rounded dog. .

The breed became very popular in the early 1900s, and in 1913 and 1914, https://oneshoppharmacy.com they were among the 10 most popular entries in the Westminster Kennel Club Show. During World War I, however, the breed fell on hard times in the U.S. and England because they were poodle for sale closely associated with Germany. Dachshund owners sometimes were called traitors and their dogs stoned. After
World War I, some U.S. breeders dachshunds for sale imported some Dachshunds from Germany and the breed started to become popular once again. The breed faced a similar fate during World War II, but not nearly so severely as during World War I.
In the 1950s, Dachshunds became one of the most popular family dogs in the U.S. again, a status they have enjoyed ever
since. While Dachshunds mini dachshund puppy for sale rarely are used as hunting dogs in the U.S. or Great Britain, in other parts of Europe, especially France, they still are considered hunting dogs. mini dachshund puppies for sale Dachshunds also love a challenge, and as long as you incorporate plenty of opportunities to chase and find things, you’ll miniature dachshund for sale have a happy dog. These dogs love their human parents, and really don’t want them to leave.

Amazing. What an amazing website .What American citizen need visa for Turkey , Yes. The previous report says that the United States is one of the top countries in the world for those who visit Turkey more. To attract more US citizens the government of Turkey introduced the US citizens to Turkey visa system which is especially for helping US citizens.

Youre so right. Im there with you. Your weblog is definitely worth a read if anyone comes throughout it. Im lucky I did because now Ive received a whole new view of this. 메이저사이트추천

As I am looking at your writing, majorsite I regret being unable to do outdoor activities due to Corona 19, and I miss my old daily life. If you also miss the daily life of those days, would you please visit my site once? My site is a site where I post about photos and daily life when I was free.

As I can see from the clarity in your post, I assumed you were an expert on this topic. Thank you very much for sharing. Travelers can obtain a Turkey visa from anywhere in the world. It is an electronic visa that can be obtained through the internet.

I read your article last night and it's so amazing. I have shared it with my friends. I hope you will publish more articles like this. People who are willing to travel to Turkey. They can apply for a Turkish visa from the website. You need an internet connection and valid documents. Travelers can apply from anywhere in the world.

A very informative article... Is that the same thing that I am trying to find. Thanks for sharing this information... The process of e visa Turkey is easy and simple, the application of Turkey evisa is easy to fill out for everyone if you want to apply for visa check out the page.