THE SAGA OF HAWKWIND by Carol Clerk - Lemmy's Departure

Carol Clerk was much loved by the musicians about whom she wrote, and her affable, easy-going nature enabled her to easily gain their confidence. The two longest books she wrote for Omnibus Press, on Hawkwind and The Pogues, both benefited from her friendship with these two very different groups, so much so that she was able to interview all the important personnel in the course of her research and get to the truth of events, no matter how unpalatable that might sometimes be. Carol simply wasn’t the type of biographer who would rely solely on second-hand sources to produce her books, and this was most unusual for biographies that weren’t ‘authorised’ by the management, ie books over which they exert editorial control and from which they benefit in royalties.
Here’s the first of two extract from The Saga Of Hawkwind, Carol’s book about the legendary counterculture band that still embrace an honourable tradition of free gigs, benefits and protests. 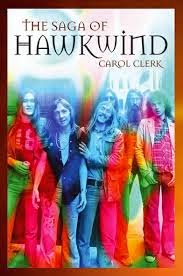 Trying to set aside their private disenchantments, Hawkwind left for a tour of the States and Canada, opening in St Louis on April 29, 1975.
But the resentments were festering beyond their control. Dave Brock and Nik Turner were individually losing patience with Lemmy who, in turn, was at the end of his tether with drummers Simon King and Alan Powell. And he was still isolated by his speed habit.
Hawkwind played a gig at Chicago on May 7, after which the first crisis occurred. “We were travelling through Michigan,” relates Lemmy, “going from Chicago to Detroit. I was with Nik and Dave and somebody else in a car. We stopped off at a roadhouse to eat. I didn’t want to eat, ’cos I’m a speedfreak. We don’t eat. I went out for a walk and a look around. I came back and they’d driven off without me.”
Douglas Smith remembers, “He disappeared and they waited for hours. He fucked everybody off.”
“We thought that perhaps he’d gone off with somebody, that he’d been offered a big bag of drugs or a lift with a pretty girl,” says Nik Turner. “We left the service station without him. What had happened was that because of what he used to take, he went off to the toilet and went to sleep. Nobody knew where he was.”
Lemmy would not be the last member of Hawkwind to be left stranded for being unpunctual. “I hitch-hiked overnight, tripping, in trucks and VW vans,” he recalls. “I got there at seven in the morning, arrived at the hotel and there was a cripples’ convention. I’m coming down off acid and there’s all these fucking wheelchairs and gimps around. I get into my room, go to sleep... and then I’m called for the soundcheck.”
Lemmy was not the most popular person in the world that day, although he did the Detroit gig and the trouble blew over.
But a much greater trauma lay ahead. Setting off in one of two cars to Canada, where Hawkwind were due to play a gig in Toronto on May 18, Lemmy was busted at the border for possession of cocaine. In fact, it was speed, a much less serious offence, but he couldn’t prove it straight away: the on-the-spot vial test couldn’t tell the difference between the two substances. It simply turned a certain colour, and that was enough to have Lemmy charged and carted off to jail on remand.
There were, apparently, two ways of entering Canada if you were travelling from Detroit – the easy way, over the bridge, and the hard way, under the tunnel, where the border police were more scrupulous.
“They spotted Lemmy with his mouth open, head lolling back,” says Dave Brock, who was with Lemmy in the car taking the more problematic tunnel route. “We were quite a shady-looking lot. The annoying thing is we’d already been waved through. Then we all had to get out of the car. They searched Lemmy, and they found some speed which they thought was cocaine. We didn’t know it was speed at the time.”
Douglas Smith was in New York when it happened. “I wasn’t going to Canada,” he explains. “I was due to fly back to London the next day. I got a phone call, probably from one of the band, who said, ‘Lemmy’s been arrested and they confiscated a white substance.’
“I think I contacted someone in New York, who organised a brief to represent Lemmy the next morning when he came to court. But as far as I remember, the brief was told there was no point in seeing the client ’cos the case was going to be chucked out. They’d thought they were going to get him for coke, and they’d realised it was amphetamine sulphate.”
Lemmy was quickly released from prison after the band arranged his bail. And since, according to his understanding, he couldn’t be charged again for the same offence, he was therefore a free man. He was whisked off to the airport at lightning speed, and as he flew to rejoin Hawkwind in Toronto for the gig, he believed that they had been doing their utmost to help him since his arrest.
He sums up what happened next in a few loaded words: “Get off the plane, do a soundcheck, do a really good show... and get fired.”

You should remember that the ultimate Bitcoin exchange service is YoBit.

Over at Take Free Bitcoin you may get free bitcoins. Up to 22 satoshis every 5 minutes.

If you're looking to BUY bitcoins online, Paxful is the best source for bitcoins as it allows buying bitcoins by 100's of payment methods, such as MoneyGram, Western Union, PayPal, Credit Card and they even allow converting your gift cards for bitcoins.

Ever considered maximizing your free bitcoin collections by utilizing a BITCOIN FAUCET ROTATOR?

Join 1,000,000's who have already discovered smarter strategies for investing in Ripple...

Learn from experienced eToro traders or copy their positions automatically!

Discover How You Can Master Your Habits And Reprogram The Subconscious Mind To Get Any Result You Want In Your Personal Development and Fulfillment!