Here’s another review from my archives, written for inclusion in a sheet music songbook that compiled many of the songs performed on the day. 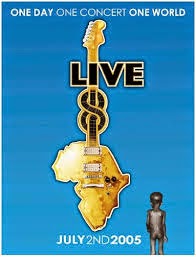 Before a worldwide TV audience estimated at three billion, Live 8 entered history books on July 2 by becoming the most watched pop event ever. The charismatic Bob Geldof once again managed to harness the power of pop to put across his powerful message to world leaders: we, the people, demand that something be done about the perpetual crisis in Africa.
The inspiration for the event came from Bono and screenwriter Richard Curtis, and it wasn’t until the U2 front man came up with the idea of opening the show with ‘Sgt Pepper’s Lonely Hearts Club Band’, to be sung by Paul McCartney with the Dublin superstar quartet as his backing band, that Geldof was convinced of the viability of trying to top Live Aid. It wasn’t exactly ‘twenty years ago today’ but near enough for Geldof to get on board, open his black book and begin recruiting.
So it was that at 2pm the former Beatle found himself singing the opening line of the opening song of what many consider to be the greatest album of all time – backed up by the biggest band in the world who promptly followed him, with Bono singing a few lines from McCartney’s ‘Blackbird’ in ‘Beautiful Day’ and closing their set with ‘One’. Normally, this would be the sort of extravaganza that would close any show and in any other circumstances Coldplay’s Chris Martin would have been shaking in his trainers at the thought of following it, but the audience warmed to his obvious sincerity, especially when he inserted a few lines from ‘Rockin’ All Over The World’ – the song with which Status Quo opened Live Aid – into ‘In My Place’.
There followed a parade of superstars, the likes of which certainly hadn’t been seen since Live Aid, among them Elton , R.E.M., Annie Lennox, Madonna, Robbie Williams, The Who and Pink Floyd. Amid the many highlights was Geldof’s own unplanned appearance with the inevitable ‘I Don’t Like Mondays’, and Dido’s pairing with Youssou N’Dour, the only African artist to appear. Enfant terrible Pete Docherty joined Elton John for a stab at T. Rex’s ‘Children Of The Revolution’, and R.E.M.’s Michael Stipe appeared with an unsettling blue stripe daubed across his eyes. Madonna was characteristically ambitious, backed by the London Community Choir, while Robbie Williams, introduced by England football captain David Beckham, covered Queen’s ‘We Will Rock You’ before singing ‘Let Me Entertain You’ and ‘Angels’.
But the day didn’t belong only to established superstars. After Keane and Razorlight, The Killers brought a touch of aggressive rock’n’roll mayhem to the stage, and were joined on guitar by Slash, the top-hatted guitar hero of Guns’n’Roses. The quirky Scissor Sisters performed a powerful, crowd-pleasing set while Joss Stone, whose soulful style belies her age, must have gained many new admirers.
As at Live Aid The Who somehow failed to live up to their reputation, choosing to perform two long, synthesiser-based songs, ‘Who Are You’ and ‘Won’t Get Fooled Again’, where three or four shorter, snappier songs that relied more on Pete Townshend’s guitar chords might have been more advisable. They were certainly full of energy but the highlight of the night, emotionally as well as musically, was without doubt the penultimate act, Pink Floyd. Somehow Bob Geldof had managed to persuade the classic Floyd line-up of Rogers Waters, David Gilmour, Rick Wright and Nick Mason to set aside their differences for the sake of the cause, and the audience was serenaded by this most ethereal of bands performing ‘Speak To Me’/‘Breathe’, ‘Money’, ‘Wish You Were Here’ and ‘Comfortably Numb’. Bereft of their usual crowd-pleasing props and light show, Floyd’s music, clearly well-rehearsed, seemed to take on an added warmth as the night drew in. The moving sight of this much loved British band together again for the first time in 24 years was made all the more poignant when Waters dedicated ‘Wish You Were Here’ to Syd Barrett, their founding genius. 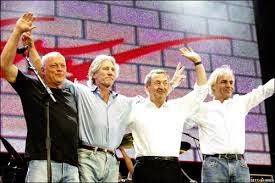 In the end it was left to Paul McCartney, nowadays rock’s senior figure, to close out the day with a Beatles medley of ‘Get Back’, ‘Drive My Car’, on which he was joined  by George Michael, ‘Birthday’ and ‘The Long And Winding Road’ which segued into the coda of ‘Hey Jude’, the ideal climactic sing-along.
Whether the world leaders who met at Gleneagles the following week got the message remains to be seen, but the day’s events proved yet again the potency of our popular music as a unifying force in this divided world.

Email ThisBlogThis!Share to TwitterShare to FacebookShare to Pinterest
Labels: Odds & Sods, Pink Floyd, The Who, U2

If you want your ex-girlfriend or ex-boyfriend to come crawling back to you on their knees (even if they're dating somebody else now) you have to watch this video
right away...

It has been said that every bettor needs to see this,