THE WHO – My Hidden Gems album 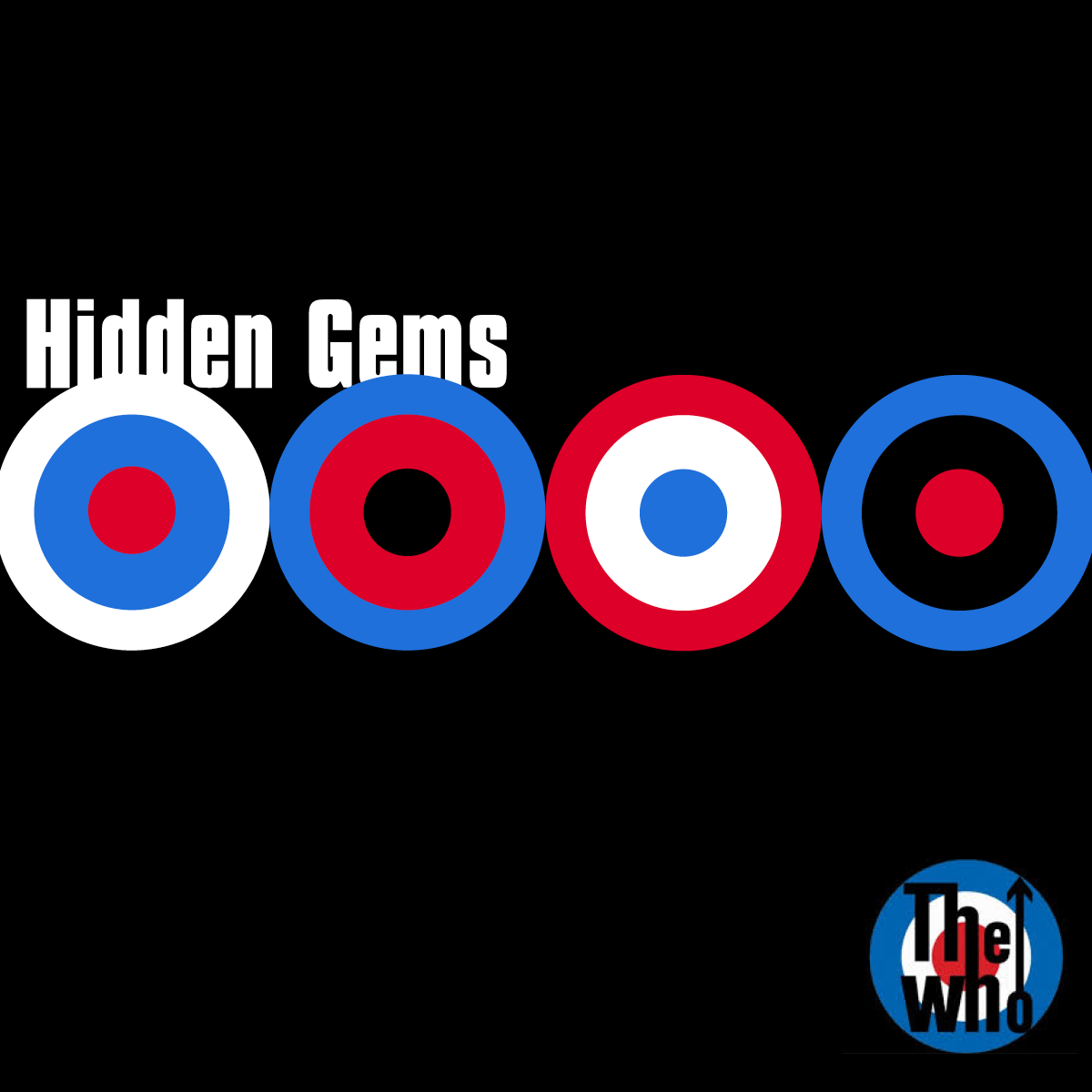 When Pete and Roger announced The Who’s upcoming 50th Anniversary Tour at Ronnie Scott’s Club on June 30 last, Pete dropped teasing hints about how the show they present might contain a few oddballs from their back catalogue and not just the true and tested favourites.
Now I know I’m not alone in believing that there have been far too many compilation albums of The Who’s best known songs released over the years and, as I wrote in my guide to their music back in 1994, this has resulted in only a relatively small percentage of their total output being widely known. “This is a great shame,” I said, “because there’s far more depth and enjoyment to be found in The Who’s catalogue than ‘My Generation’, ‘Pinball Wizard’, ‘Won’t Get Fooled Again’ and the ten or so other Who classics that are endlessly recycled by most radio stations, especially in the US.”
To a certain extent Roger’s tour that featured Tommy in its entirety and The Who’s recent Quadrophenia shows have alleviated this problem, albeit only as far as these two conceptual albums are concerned. Elsewhere in the catalogue there are still plenty of fine songs that don’t seem to get an airing and which I know are much appreciated by fans who know their way around it. This much can be gauged from a couple of ‘music of the Who’ style albums I have by various artists, most of them much younger bands who love their Who and sometimes choose lesser known songs to cover.
At present the principal Who hits compilation is 2002’s 2-CD package The Ultimate Collection, which contains a whopping 40 tracks but the vast majority have appeared on ‘best of’ LPs or CDs before, and although there are some lesser known songs (and rather too many from the post-Moon era for my liking), they are mixed up with the usual suspects so that those fans who already bought the previous ‘best of’ CD are forced to duplicate big time if they want the extra songs. That previous CD was a single album, My Generation – The Very Best Of The Who, with 20 tracks, which I had a hand in compiling (and a gold album for which adorns the wall in our downstairs loo at home). This was released in 1996 to complete the catalogue upgrading programme undertaken around that time and, curiously, sells on Amazon in the UK for £13.15 while the more extensive Ultimate Collection sells for £8.32 (which reminds me of the old joke in which the first prize in a competition is one week in some godawful holiday resort and the second prize is two weeks).
When Abba Gold revitalised the Swedish quartet’s fortunes in 1992, the group released a second album, More Abba Gold, one year later with lesser known tracks, many of which hadn’t even been released as singles at all, so were hardly ‘gold’ in the sense that they qualified for a gold record. Nevertheless, this “volume two” release notched up total sales of over two million copies, more than most acts sell of their premier greatest hits collections. So, applying the same kind of thinking to The Who, how about they release an albums of tracks that have never appeared on any hits albums but which, to my mind, demonstrate not only their great diversity but also that their catalogue contains many more terrific songs than just those found on the hits albums? In the modern era, with sales of individual tracks on iTunes eclipsing actual albums, it makes good sense since, if nothing else, it at least draws attention to them. I’d call it The Who – Hidden Gems.
To this end, and purely as an exercise, I’ve picked 20 tracks that will hopefully fit onto a single CD, and I make no apologies for including nothing from after By Numbers. Almost all of these appeared on the 30 Years Of Maximum R&B box set, of course, but the market I’m aiming for is somewhere in between that and the two existing compilations; for the fan who wants a bit more Who than the compilations offer but doesn’t want to shell out £35 or whatever for the box.
Here’s my selection:

I’ve road tested this ‘album’ by turning it into a playlist on my iPod and it works pretty well. ‘The Ox’ acts as a sort of Overture and, apart from ‘Disguises’, the earlier tracks demonstrate The Who’s poppier, more melodic side but still have that edge you won’t find with less spirited groups. The inclusion of ‘Rael’ and ‘Sparks’ adds a nice touch of melodic continuity to the heart of the collection and although there are no songs by John, ‘Dreaming From The Waist’ sees him shine on bass and Keith gets a look-in on ‘Bell Boy’. Pete as vocalist is also well represented with ‘Sunrise’, ‘Going Mobile’ and ‘Blue Red And Grey’, and my selections from Tommy and Quad were chosen on merit, not the best known but all impressive songs, especially ‘Punk…’ which neatly references ‘My Generation’. It’s sequenced chronologically apart from ‘Naked Eye’, the only live track, which I think offers a fittingly dramatic conclusion after the poignant charm of ‘Blue Red And Grey’.
The sleeve is a virtual reality conception designed by my wife (no relation to John’s song). Other suggestions welcome.
Posted by Chris Charlesworth

I like the list, though it would have been nice to see Music Must Change make the cut.

"Going Mobile" is played to death on every classic rock station. Much better would be one of John's gems like "Heaven and Hell". "Pure and Easy" would also be a great inclusion, preferably right before "Song is Over". And "A Quick One" live from The Rolling Stones Rock And Roll Circus is practically a must.

A pretty good list by those above so I won’t mention any they have. However, there are some gems to be mined in the last four albums by The Who and a few others I feel you missed. I’d also lean more heavily on live renditions.

1. Success Story. John’s wry look at the rise of The Who – it was a standout for me on what I thought was a very uneven offering of Who By Numbers. Never played live by The Who.

4. You. Another Entwistle gem and the best rocker on the Face Dances album. Never played live by The Who but man this song should have been.

5. Won’t Get Fooled Again (live the Concert for New York City 2001). The old warhorse does it again and brings down the house at Madison Square Garden. The Who playing as a five piece were on fire that night and stole a loaded bill at MSG.

6. Old Red Wine. Pete’s bittersweet memorium to John played life on the 2002 and 2004 tour. This song led to great jams in concert. I would choose

7. Mike Post Theme. While most of Endless Wire sounds like a Pete Townshend solo record that has Roger Daltrey singing on it this one IS a Who song. Powerful live I’m partial to the Atlantic City 2006 verison but the Madrid 2007 where Roger forgets the name of the Endless Wire album while introducing this number is quite amusing.

Agree with Matt on Success Story and Don't Know Myself. I'd include The Good's Gone, Heat-wave and John's brilliant Whiskey Man from the early years; and I've Had Enough and Dr Jimmy from Quadrophenia. The version of Baby Don't You Do It from the B side to Join Together shows all of them at their live best.

5. Mary Anne With The Shaky Hand

15. The Punk And The Godfather

20. Dreaming From The Waist

If we upped the track count, I'd add (chronologically) "I've Known No War," "Cry If You Want" "Fragments" and "We Got a Hit," all of which I genuinely love.

Personally I'd lean less on Sell Out.

Not to go off tangent, but here's a question that's nagged me for 20 years now -- why oh why was Meaty Beaty never considered for the reissue campaign? In fact, if you double that with Hooligans (excepting the repeats) you'd have a pretty decent, if not "ultimate" collection, and there'd be no need to do a new compilation every five years. (Not to mention having the longer Magic Bus and I'm A Boy, instead of the short ones ad nauseam.

As of 'nothing after By Numbers', i'd love to see the Who open their set not with the obvious old standards, but with 'New Song'. The live version of '905' from the 'Tommy Live box set is amazing. 'Eminence Front' gets better every year as Pete's soloing gets harder...sometimes even feedbackish. The song 'endless wire' is top-tier, esp the version with Daltrey singing lead. 'Another Tricky Day' has huge live potential as well.

Well when we're on it: why o why no re-issue for The Ox compilation. I'd buy it in a minute...

Doctor Doctor - b-side of pictures of lily. A great entwhislte track with a killer bass line and moon going for it like only moon can

This was just off the top of my head but:
Legal Matter
Bald headed women
So sad about us
Sunrise
Smash the Mirror
Welcome
Love aint for keeping
Naked Eye
Now im a farmer
Helpless dancer
Sea and sand
Slip kid
Blue red & grey
Music Must Change
Athena
God speaks of marty robbins

The december 1982 version of "Naked Eye" is the best version.

What about join together. Rogers voice at its best

I'd add Boris the Spider...

• The 1st line of New Song is just a ripper.
• Pete unleashing Rod Argent in the middle of Who r u adds that something in the ethereal air.
• Love Reign O'er Me benefits beautifully being followed by Love is Coming Down.
• Young Man Blues (Live) is what versions of Red House is to their Track Records labelmate.
<3 posts and comments.
p.s. ¿who else could write Imagine a Man using perdemption, skirting pomposity, going to literate.

Defo agree on the solo Lets see action! Its a great version.

Join Together< I Can See For Miles, and Pure and Easy and also Young Man Blues should without a doubt be on the list!!!!!

Forgot...In a Hand or Face

I saved this page a couple of years ago and just found it again whilst cleaning up my bookmarks. Thought I'd give it a run on Spotify. So good to revisit these gems! https://open.spotify.com/user/1231180986/playlist/4crwxgtWgcYVcoFEcwTKb4