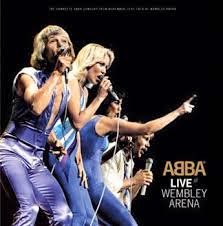 Love this blog Chris; just a quick reminder that one act who did six consecutive nights at Wembley (Empire Pool as it was then) was David Bowie on the Isolar Tour in May 1976.

Couldn't let that one go by without mentioning it!

If pointing to Frida's strengths, why not also point to her shortcomings? She wasn't perfect and shrilled a lot struggling with high pitches. She was also overbearing, too loud and not in balance with Agnetha's voice. Just because she was louder, it doesn't mean she was better. Her songs in comparison to Agnetha's are lower in tone and slower. And while you're at it, how about Agnetha's performance? Just like Frida's it was a bit faulty at times, but also shone in many of the solos and duets with her belting just as well as in the studio. I was floored to hear her almost flawless on so many high notes, doing an incredible job both in fast and slow songs, yet you mentioned none. If you want to be taken seriously, be fair and balanced in your review. Don't show a blatant favoritism to one side only.

Very interesting blog, Chris, I do enjoy your daily articles. Worthy of mention too is that Pete Townshend told Bjorn he thought "SOS" was the best pop song ever written... "I was so proud..". I believe John Lennon said similar.

Yes, I know about what Pete said. Didn't know John said something similar. Wouldn't surprise me though. John liked old rock'n'roll and well-crafted pop, but he wasn't a fan of hard rockers like Led Zeppelin and the like.

Good review, Chris. Thanks for sharing.

As far as I remember Lennon was referring to Knowing me Knowing you, whereas Townsend about SOS

That's what a lot of the Frida fans are like, unfortunately. They must take sides and give their biased opinions.

Would it not be best to read everything like 'The Winner Takes It All' article below before denouncing someone? As ABBA fans or even just admirers of the group, we don't have to agree on absolutely everything.

I think that the comments have underrated ABBA. everyfan has a favourite.All in all they have been, and still are the best in all eras of music,and all fans are still crying out for more, even todays era.

As a 15 year old at the time, this was my first concert. Its hard to believe how long ago it was but I can still remember odd bits such as Frida coughing on a cigarette during the opening to Money Money Money. I think she stood by the piano, took a drag of this cigarette on a stick and inhaled too much smoke. Certainly remember Bjorn saying it was far too long. They had a support slot during the show where one of the band sang his song. Polite applause at the end.
The girls had these steps by the side of the stage where they climbed up and sang to us lot by the stage.
Don't remember 'SOS' but I certainly remember 'As Good As New'.
I went on the Thursday night which they announced they were filming.
If it wasn't for Capital Radio mentioning they had released extra tickets for these shows, together with my wonderful father committing to going up to Wembley box office at the crack of dawn, I never would have gone!

Las vegas recording studio I think this is an informative post and it is very useful and knowledgeable. therefore, I would like to thank you for the efforts you have made in writing this article.