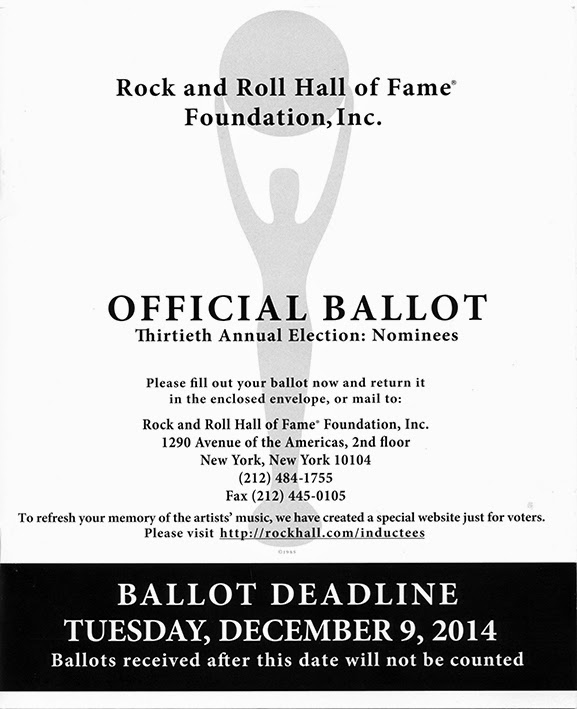 It’s that time of the year again. Today I received my ballot papers for next year’s inductees into the Rock’n’Roll Hall of Fame which I have been voting on for many years now, going back to the days when a cassette of music by the nominees was included in the package. Then it was a CD, and I’ve still got a few of those in my collection, but nowadays it’s just a website address where I can ‘refresh my memory’ if I need to do so. I don’t, and I think that any voter who needs to be reminded of what the inductees sound like doesn’t really deserve to have a vote.
I believe I am one of 600 rock’n’roll devotees around the world who vote, and my ballot paper has the number 052 on it, so either the 51 names before mine begin with A leading up to Ch, or they have all been voting for longer than I have. If it’s the latter this gives some indication of how long I’ve been doing it, even bearing in mind that some of us old time voters will have ascended to the great gig in the sky by now.
There are 15 names on the ballot list this time around and we can choose five in no particular order. The nominees are The Paul Butterfield Blues Band, Chic, Green Day, Joan Jett & The Blackhearts, Kraftwerk, The Marvelettes, NWA, Nine Inch Nails, Lou Reed, The Smiths, The Spinners, Sting, Stevie Ray Vaughan, War and Bill Withers. Some of these have been nominated before but failed to get the requisite number of votes. Still no Richard Thompson I note – I have been suggesting him to the anonymous board whose choose the nominees for about ten years now, all to no avail. I’ll do so again, as ever adding a note in with my vote, but I don’t hold out much hope.
So who to vote for? Well, two nominees, Lou Reed and The Smiths, are a shoo-in. Lou is already a member through the Velvet Underground, of course, but his post Velvets work merits a vote in anybody’s book and his death will no doubt add a touch of sentiment to his cause. The Smiths are the light that never goes out and if they get in, as they surely must, it is likely to create another of those awkward situations in that only the original band can be inducted but they don’t speak to each other nowadays, let alone play together, as has occurred in the past with Creedence Clearwater Revival, Steely Dan and Blondie. Can you really see Morrissey and Mike Joyce sharing a stage together after the war of words that followed Joyce’s lawsuit against Morrissey and Johnny Marr for a greater share of Smiths’ royalties? This will be interesting, to say the least.
And so on to my other three nominees. I have always loved Stevie Ray Vaughan. Tragically cut down in his prime in 1990 after straightening out his life, he first came to my attention as the featured guitarist on David Bowie’s Let’s Dance album, as he probably did for many others. Then I discovered Texas Flood and the rest of his catalogue followed, and I now believe he belongs up there with any of the great rock and blues guitarists of the 20th Century. If you don’t believe me go out and buy a DVD recorded in 1983 called Live At El Mocambo, settle down with a nice glass of red and watch a master at work.
Two to go, and I’ll opt for Kraftwerk which might just cause a similar situation to The Smiths insofar as Ralf Hütter is the only member of the ‘classic’ Kraftwerk (Ralf, Florian, Karl & Wolfgang) still in the group and he’s alienated the other three by sustaining the lucrative franchise all by himself. Nevertheless, as the booklet that accompanies the ballot paper puts it, Kraftwerk’s music is the foundation on which all synthesiser-based rock’n’roll and dance music is based. I happen to like a lot of their music, my choice KW tracks, which I may have mentioned before, being ‘Europe Endless’, followed by ‘Neon Lights’ and ‘Franz Schubert’. They deserve to be in there, even if the way they conducted their career was the antithesis of the cliched rock'n'roll lifestyle.
So who gets my final vote? I’m undecided. Any ideas? I don’t have to send in my vote for another week or two, so if any Just Backdated readers want to add their fourpenneth I’m happy to listen.
Posted by Chris Charlesworth

Chic. Influential, innovative, sold shitloads of records and had one of the best rhythm sections of any band ever. No-one else on that list comes close

The Paul Butterfield Blues Band. The superb guitarwork of Mike Bloomfield. Up there with the best.

Chris, I didn't realise The Paul Butterfield Blues Band weren't already inducted, they have been nominated to my knowledge several times. That their key guys died young hasn't helped them sustain a lasting audience but to have impressed the Chicago greats in the '50s, Clapton in the '60s with Mike Bloomfield who is currently enjoying a posthumous renaissance, and cited as a big influence today on Joe Bonnamassa today their influence spans the last 50 years. Surely its their time this time. Cheers, Steve McCracken

Until John Prine is on the ballot I'm not sure I could vote for anybody.

They're not really my bag but I would have thought Green Day would have to be up there. Agreed it's a shame about Richard Thompson,

Another call for Chic.

It's got to be Chic, Chris. They had such an impact - Good Times when sampled, almost single-handedly invented rap, whilst Nile's guitar and production speak for itself. And they were cool, basing their iconography on Roxy Music. Nile Rodgers was one of the best interviewees too.