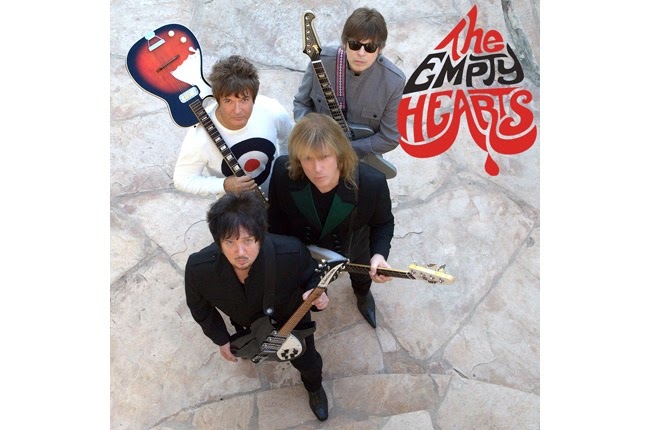 One glance at the sleeve of this debut album by The Empty Hearts tells you pretty much all you need to know about the music inside. A side project featuring Blondie drummer Clem Burke, Cars guitarist Elliott Easton, Chesterfield Kinds bassist Andy Babiuk and Romantics singer Wally Palmar, The Empty Hearts pose elegantly sixties style, appropriating the image of The Who on their debut album, gazing upwards at a photographer on a ladder, with a selection of guitars, including a pale blue Vox Teardrop bass, that could only have come from Vintage & Rare. I suspect their amps have too. Hell, Clem even wears a white target top.
The obvious influence is the tougher end of sixties power pop, with most reviewers pointing to those wonderful mid-decade singles by the Stones, Who and Kinks, but I think the Hearts have dug a bit deeper into their record collections and listened again to Beck/Page era Yardbirds and Roy Wood’s Move, and they also tip their hat to Cheap Trick and the garage rock that Lenny Kaye unearthed in 1972 for the first Nuggets compilation. Either way, all four of these grade-A students of rock history must have had a whale of a time writing and playing songs that pay tribute to their formative Brit influences yet at the same bring them into the modern era with crisp production, faultless playing and a rippling feel for the music, passion really, that rocks hard from beginning to end.
Indeed, the pace of the album only really lets up twice, on ‘Fill An Empty Heart’, the nearest thing to a title track, which sparkles with the rhythmic acoustic guitar that The Beatles introduced on ‘Things We Said Today’ and a deeper, more rounded Telecaster tone for the fills; and on ‘I Found You Again’, a country rock song, all stetsons and pedal steel, Sweetheart Of The Rodeo Byrds. An acoustic version tacked on as a bonus features Ian McLagan on honky-tonk piano, and Mac’s Hammond can be heard on several others songs.
Everywhere else is pretty much full tilt, half the fun spotting the licks that have been retooled and re-energised. ‘Soul Deep’ channels their inner Kinks, a sort of cross between the first two their singles and the first two by The Who, and ‘(I See) No Way Out’ features a pause at the end of the verse that I could swear was lifted from a similar split second in ‘I Can See For Miles’. ‘Perfect World’ moves more into punk territory and ‘Drop Me Off At Home’ sounds like a Keef sketch he was working on around the time of Sticky Fingers. The closing song ‘Meet Me Round The Corner’, all reverberated distorted guitar and harmonica, is a dead ringer for a Beck-special Happenings Yardbirds number.
All of which might suggest The Empty Hearts don’t have any ideas of their own but this far from the case. They might sound like guys aching to play cover versions of their favourite Brit Invasion songs through dusty old valve amps they just found in a second-hand store but their licks are new, the songs are fresh and their approach is a compliment, not an imitation. The vocals, both lead and back-up, leap from the speakers, the guitars are solid and melodic – never overstretched, never metallic – and the drumming both rock-solid and inventive, with no click-tracks, as you would expect from the guy who bounded through ‘Dreaming’ like an express train.
Posted by Chris Charlesworth

Just saw their first live show last night (10/14). After listening to the album I was amazed at the space they created within the songs to allow for some authentic live garage rock jamming. I believe they played the entire album and I was really surprised how well every song translated to the live space. This is a band that needs to be heard live. It now seems obvious the music was created as a band project as opposed to a studio project. I would bet Eliot was a bit surprised by his new found freedom and how well it worked. As the night went on he got looser and looser and he really started ripping off the types of leads that made you say WOW when you first heard the Cars. Wally was great out front and really showed that he hadn't lost any of the energy he had from the last time I saw him in such a small venue back in the early 80s'. Clem came flying out of the gate tossing sticks up in the air, knocking over his hi-hat at one point and continued to be that express train that Chris mentioned above. It was a home town hero's welcome/send off for Andy Babiuk. The pride the crowd had for this guy was palpable. A true local treasure that deserves all the appreciation he got last night. He and the entire band put on a great show that you'd never, not for one beat, ever notice was for free. In addition to the new tunes they cranked out a couple great versions of Cars and Romantics tunes. I grabbed a set list and by that it looks they have a couple Blonde and Kings tunes ready to rock at some point during the tour also. I can only imagine how good they're going to be once the tour hits full stride. Look for them.