ROCK MOVIES - Why You Don't Get The Music 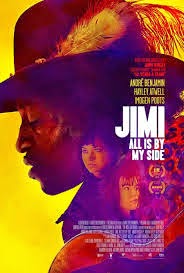 I read in today’s Guardian a review of Jimi: All Is By My Side, a biopic of Jimi Hendrix set in sixties London that features André Benjamin, the rapper better known by his stage name André 3000, in the title role. It’s a sympathetic review and I’ll get around to seeing this before long (and review it here) but what saddened me was to read that no Hendrix music appears on the soundtrack, the producers having evidently failed to get clearance from the Hendrix estate. Sad but not surprising. I long ago realised that one of the reasons why so many rock biopics fail in this department is because the music can be cleared only if those who hold the copyrights are granted some form of editorial control over the film and, in most cases, if the film doesn’t promote a relentlessly positive image of the artist they aren’t interested.
Many years ago on a flight to the US I found myself with little choice but to watch a 2005 film called Stoned, about the life of Brian Jones’ with emphasis on his departure from The Rolling Stones and subsequent death. It was a piss poor film actually but what made it even worse was the music, which was either lame versions of songs by others that the Stones covered on their early albums, that is a studio band trying to sound like the Stones playing songs like ‘Route 66’, ‘Carol’ and Walkin’ The Dog’, or inappropriate sixties music, including – if I remember rightly – ‘White Rabbit’ by Jefferson Airplane and a few Small Faces songs. The inference is that this music was easy to clear (The Small Faces long ago lost the rights to their music which is now controlled by agents happy to make a buck regardless) while Rolling Stones music from the Sixties, then controlled by Allen Klein, was not.
Here at Omnibus Press we are often approached by film makers seeking, for a price, to option a book, that is secure the exclusive film rights to the book for a period of time during which they will try to put together all the other elements necessary to make their film. If they fail to do so the option runs out and they’ve lost their money, which is invariably what happens. And the reason it happens is because they have been unable to secure the rights to the music, at least not on terms that are acceptable to them.
Among the many titles where this has happened are our biographies of Syd Barrett, the founder of the Pink Floyd, and Peter Grant, the manager of Led Zeppelin. I was left to assume that in both cases the film makers were unable to agree terms with those who control the rights to the Pink Floyd and Led Zeppelin’s music, and it doesn’t take a great leap of imagination to assume that this was because today’s Pink Floyd don’t want Syd’s acid casualty condition scrutinised in a high-profile movie, and neither do the former members of Led Zeppelin want their old manager’s strong-arm methods put under the spotlight long after he’s been laid to rest. Both groups are now pillars of the rock establishment so all that messy business from the past is best forgotten.
But the main casualty of this phenomenon is Dear Boy, our much acclaimed best-selling biography of Keith Moon, by Tony Fletcher. At one time this was optioned by Tribeca, the film company headed by Robert DeNiro, but they were unable to secure The Who’s music because Pete Townshend had promised Roger Daltrey that if ever he was involved in a film about Keith Moon he would be given the rights to the group’s music. Roger, who unlike Pete was never a fan of Dear Boy, has hemmed and hawed about a Moon movie for years now but nothing has ever been put into production, so it’s a stalemate situation.
One film that did manage to secure the music rights was The Doors, the 1991 biopic of the LA band starring Val Kilmer in the role of Jim Morrison. Lisa and I went to see it at the Odeon on Kensington High Street not long after it was released. I wasn’t particularly impressed – thought it overcooked the rock clichés – but one thing I do remember is that to my astonishment many in the audience were smoking joints in the cinema. You wouldn’t get that today.
Posted by Chris Charlesworth

Chris, you should make an effort to see the Jimi Hendrix movie. It is a very intimate portrait of Jimi before he became Jimi and how he was discovered by Linda Keith... Amazing is the meeting with The Cream and hoiw he floored Clapton by playing Killing Floor... One of the best rock movies I have seen. You can actually smell London of 1967!
Cheers, Armando

Start following our trades NOW & earn up to 270% per day.