Having read the book, we couldn’t resist seeing this film, especially after all the rave reviews. Yesterday I pretended to be an art critic so today I’ll pretend to be a film critic. 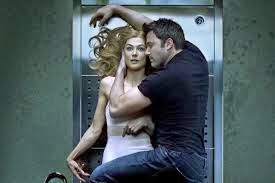 Lauded as a thriller, criticised as misogynist, Gone Girl is really all about illusion, not just the central plot in which Amy (Rosamund Pike) creates the illusion of having been murdered by her husband Nick (Ben Affleck) but in all the many different illusions that can be created by skilful image management.
Amy is the victim of a publishing phenomenon, a series of children’s books written by her parents in which she is portrayed as ‘Amazing Amy’, a sort of pre-teen supergirl, and, though she is anything but, the illusion has stuck with her in real life ever since. Her marriage to Nick is an illusion, happy on the outside but crumbling beneath, and though the deception is maintained for appearance sake Amy has befriended a neighbour to whom she confides that Nick is violent and controlling, at best an exaggeration, at worst a lie, but the illusion is all that matters. A hideous female TV presenter, knowing how best to ramp up viewing figures, aims broadsides at Nick that suggest he is a killer but Tanner (Tyler Perry), Nick’s Attorney – ‘the patron saint of wife killers’ – knows all about illusion too and lectures Nick on how to present himself sympathetically on TV so that viewers will side with him. Nick’s bit-on-the-side Andie (Emily Ratajkowski) is in reality a sex-hungry young vamp but dressed up for a TV interview in a high-collared white blouse, her hair straightened and parted in the centre – ‘like a Mennonite’ – she creates the illusion that she’s a wronged innocent. When towards the end of the film Amy returns from her ‘ordeal’, the blood of her ‘abductor’ still dripping from her skin, she runs into Nick’s arms to the delight of rubberneckers and TV crews outside their home. “You fucking bitch,” whispers Nick into her ear as the crowds applaud the illusionary happy ending.
The film is faithful to the book (apart from a final, rather unnecessary, twist). On their fifth wedding anniversary Amy disappears from the marital home in Missouri where she and Nick have moved after losing their cool media jobs in New York. There are signs of a struggle and, at first, it seems she has been abducted. Only later, after she’s been gone for several days, does circumstantial evidence planted by Amy point to Nick being her killer. But without a body or a confession the police can’t make a charge stick. Amy, meanwhile, is on the run but her (extraordinarily) carefully laid plans come unstuck when she is relieved of her cash and as a result turns to Plan B which involves a rather creepy but immensely wealthy ex-boyfriend who is still besotted with her. Then things get very nasty indeed.
Rosamund Pike is brilliant as the scheming, wronged woman, sexy and slinky when the role calls for it but equally convincing as the frumpy Amy who’s the ‘gone girl’ of the title, scenes for which she was obliged not just to switch character (and accent) but to put on weight. Ben Affleck plays his part in stoic fashion, perhaps a bit too much so, and his rather passive reaction towards his predicament seems at times as implausible as the plot itself. It certainly adds to the perception of his guilt – if that was the intention. At two hours and 25 minutes it’s a long film but it never drags and even though I knew the plot and how it would resolve I was on the end of my seat most of the time. Author Gillian Flynn has done a wonderful job turning her book in a screenplay that includes plenty of sharp, occasionally witty, dialogue, twists and turns galore and a rather enigmatic ending that reiterates the opening scene. It also opens the doors to a sequel.

Start following our signals right now and gain up to 270% per day.

If you want your ex-girlfriend or ex-boyfriend to come crawling back to you on their knees (no matter why you broke up) you gotta watch this video
right away...