BOB DYLAN - Shadows In The Night 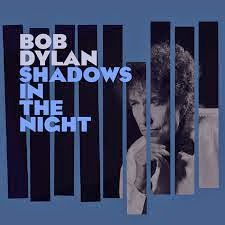 A few years ago I made the catastrophic mistake of investing in Bob Dylan’s Christmas record, one of the very few albums I’ve ever downloaded onto my iPod and subsequently deleted, aside from the mildly amusing ‘Must Be Santa’. Never again, I thought, so I was going to give Shadows In The Night, his album of covers from the Great American Songbook, a miss. Then I read my old MM colleague Richard Williams’ encouraging review on his Blue Moment blog, and changed my mind.
Shadows In The Night follows in a not always honourable tradition of covering pre-rock’n’roll material established in 2000 by Robbie Williams, and since taken up by Paul McCartney and Rod Stewart, amongst others. Unwisely, I think, the latter felt the need to release no fewer than four albums of songs from the Great American Songbook, so many in fact that there was even room for a fifth, a ‘best of’ culled from the other four.
I had always thought that a key function of Dylan and The Beatles was to eliminate this kind of music, exemplified by Frank Sinatra who, after all, was quoted as saying, “Rock’n’Roll is the most brutal, ugly, desperate, vicious form of expression it has been my misfortune to hear” around the time of Elvis’ breakthrough. Unlike Sinatra, the rock’n’rollers maintained a dignified silence in the face of this onslaught and, decades later, are paying tribute to their forebears.
All the songs on Dylan’s Shadows In The Night were recorded by Sinatra but where Bob differs from the others in his treatment of material from this era is in the sparseness of the backing. Instead of relying on a sweet orchestral backdrop, a soft cushion that in many ways emulates of the arrangements of the original recordings, Dylan’s interpretations use minimal backing, predominantly an electric bass and slide guitar with little else in evidence. Also, wondrously, Dylan’s voice seems to have improved immeasurably since that dreadful Christmas album or, for that matter, since Together Through Life and Tempest, his last two regular albums. Perhaps this is because these songs put less strain on his now weary vocal chords, but I like to think it’s because he feels the songs require his respect, not the most common commodity in Bob Dylan’s exchanges with the world.
The three songs that stand out for me are ‘Autumn Leaves’, ‘Some Enchanted Evening’ and ‘That Lucky Old Sun’. While all the songs dwell on regret that follows a love lost, ‘Autumn Leaves’ seems to suit Dylan in the autumn of his career while ‘Some Enchanted Evening’, a song from the musical South Pacific that my mum took me to see when I was in short trousers, brought back a charming echo from a very distant past. ‘That Lucky Old Sun’, not a love song, closes the album on a touching note that, like another old favourite of mine, ‘Ol’ Man River’, contrasts our lives of stress and strain with the ease with which the natural world goes about its business. Bob sings it beautifully.
Posted by Chris Charlesworth

Cool blog. Excellent Lemmy, Damned and Miles Davis stories. Wasn't this 'not always honourable tradition' established by Linda Ronstadt in 1983? And Carly Simon's third album of standards came out in 1997. Sorry, hate to see Robbie Williams credited with anything. (Lovely piece about your Dad.)

Thanks Mark. I think you may be right re Linda R, and she even tried her hand at comic opera too I think.

I would have to say, I think Bob Dylan's Christmas record is a masterpiece -- the pinnacle of an artist in straight-faced self-parody, and a gleeful supplier of belly laughs every holiday season.

I would have to say, I think Bob Dylan's Christmas record is a masterpiece -- the pinnacle of an artist in straight-faced self-parody, and a gleeful supplier of belly laughs every holiday season.