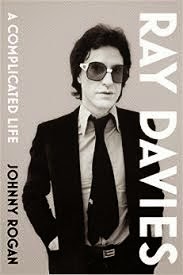 [ii] One of whom, Peggy, Rogan reveals, gave birth out of wedlock in the early fifties to a girl they called Jackie whose father was a mysterious African who returned there not long after the child was born. It is to Davies matriarch Annie’s enormous credit that Jackie was raised within the family without any concern for the potentially scandalous consequences.

[iii] Rasa (who incidentally discloses she saw The Beatles in Bradford in December 1963, the same show I attended) proves a valuable source of information for the author, speaking candidly about the strain of being married to Ray, his penny-pinching and their challenging domestic circumstances. Ex-wives and former (let alone current) partners of male rock stars are all too often missing from rock biographies, no doubt silenced by their former husbands under pain of losing maintenance payments or simply unwilling to dredge up painful memories. Those biographers who succeed in persuading the girls to grant interviews invariably discover a rich seam of material with which to illuminate their books. Two examples from the Omnibus catalogue are Dear Boy: The Life Of Keith Moon whose author Tony Fletcher succeeded in persuading Kim McLagan, formerly Kim Moon, to speak candidly about life with the unconventional drummer, the first and most substantial of only two interviews she ever gave, and Had Me A Real Good Time, Andy Neill’s biography of The Faces, for which he managed to round up a posse of former WAGS, all of whom were refreshingly indiscreet in their recollections.

Is there a USA release planned for this book?

You could be qualified for a complimentary $1,000 Amazon Gift Card.