CBGBs – A Report from the Front Line, Part 1

Although it opened towards the end of 1973, it wasn’t until the summer of the following year that CBGBs began presenting the kind of acts that would make it famous as New York’s premier showcase for what became punk rock. I went there many times between 1974 and ’76 to see all the usual suspects, not all of them ‘new wave’ – Tom Petty & The Heartbreakers, for example, were mainstream rock – but it never occurred to me or anyone else that this scruffy bar would one day become legendary. It was probably Bob Gruen who told me to get my ass down there and I generally paid to get in too, willingly; the acts (or their record labels) that gave me free entry to more prestigious gigs everywhere else didn’t need my dollars, but this lot did. In November of 1976 I was sufficiently enthused by the scene at CBGBs to eulogise about it in Melody Maker, interviewing its owner Hilly Kristal and drawing comparisons between it and Max’s Kansas City, the other, much older and probably more famous NY downtown rock club.
CBGBs closed in 2006, the surrounding area having ‘fallen’ into gentrification, and the building – now a clothing store – is on the US National Register of Historic Places. Funny that – the very last time I went there, in 1978 I think, I was chatting up this pretty girl at the bar when the singer of a sixties girl group who was a ‘friend of Dorothy’ came along and brushed me aside with the ease of a practised seducer. I think they were already acquainted. “C’est la vie,” said Chuck. “It goes to show you never can tell.”
Here’s my 1976 MM report from CBGBs, which opens with a sort of state-of-play analysis of the downtown NY rock scene as things stood in November of that year; in three parts, part 2 tomorrow featuring an interview with Hilly, part 3 on its rivals will follow. 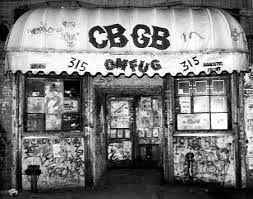 “Punk rock? What’s that supposed to mean? The bands that play at my club aren’t punks. They might wear leather jackets, chew gum and try to look tough, but they’re nice guys.
“Even the Ramones are nice guys when you get to know them. They ain’t punks, and I dunno what the expression means. They’re just rock groups to me, and many of them are good rock groups.”
Hilly Kristal seemed genuinely bemused at the thought of “punk rock,” in a broad sense, being used as a term to embrace the bands that appear at his now notorious New York bar, CBGBs. He’s right, too. Many of the bands on the current New York underground circuit these days sound more like Yes than Iggy Pop, though it must be said that almost all of them owe a debt to Lou Reed.
There are now many young bands emerging from the suburbs to appear at CBGBs (or at the other three establishments which cater for them). What began at the Mercer Arts Centre five years ago with the New York Dolls and Patti Smith has grown into a tidal wave of eager groups, all anxious to take part in a rock renaissance.
And the record companies are starting to take notice at last. The latest count in the signing sweepstake is seven, including Patti Smith and the Ramones whose record deals have already yielded finished albums. The other five are currently in the studio, holding back until after Christmas:
Television have been signed by Elektra-Asylum. They are currently in the studio working with Andy Johns, brother of famed producer Glyn Johns. Their album is expected in February.
The Dictators have also been signed by Elektra-Asylum, although the release date of their debut album is “indefinite,” according to the record company. This band – a heavy-metal outfit of awesome proportions – is now managed and produced by Sandy Pearlman, who also manages and produces Blue Oyster Cult.
Blondie have signed with Private Stock, and completed an album due for release in January. Originally they were signed to a deal for a couple of singles only but increased enthusiasm within the record company led to an album.
Talking Heads have signed with Sire. They are due in the studio in January.
Mink De Ville have signed with Capitol for the US and Canada and EMI for the rest of the world. They are due in the studio in January and hope to have an album out in April.
And to keep the record straight, Patti Smith has just released her second album on Arista, while the Ramones’ first album on Sire has now been out six months. Also of note are Jonathan Richman & the Modern Lovers, originating from Boston, who have had two albums released on the Berserkley label.
Eight bands appeared on the first CBGBs compilation album which is being distributed by Atlantic, which has an option to sign any of the bands on the record. As yet they haven’t picked up the option on any of the bands, one of which (Mink De Ville) has already gone elsewhere. A second CBGBs album is in the making and RCA are showing a strong interest in picking up a similar distribution and option deal.
Seven bands are featured on an album released last week by Max’s Kansas City which, like the CBGBs album, is being distributed independently unless a major picks it up.
Richard Hell, whose name bears the closest resemblance to “punkdom” of any underground character in the city, has just released his first single, albeit on a private, independent label. Hell, one of the most original and expressive characters to have emerged from the scene, is a former member of both Television and the Heartbreakers. He now fronts a band called the Void Oids.
All this leaves many of the better-known bands without immediate recording prospects. The Heartbreakers, whose act has improved immeasurably since their early days, are still on the hunt but record companies are doubtless scared off by the presence of Johnny Thunder, a one-time New York Doll. No-one likes being reminded how Mercury lost a small fortune by signing and promoting the Dolls.
Lastly, the Dolls themselves (they’ve dropped the New York since re-organisation) are still battling forward under the leadership of David Johansen who refuses to lie down. No record prospects though.

My old bandmates included Mort Bauman of Sonny Vincent , Marc Perlman (Jayhawks, Golden Smog). In the late 70's Mort told me how they came into CBGB's one time, and everyone ran from Andy Warhol to Sonny for their autographs instead. Sonny recently played in Velvet underground redux...