ELTON JOHN – Some Recollections in an Interview 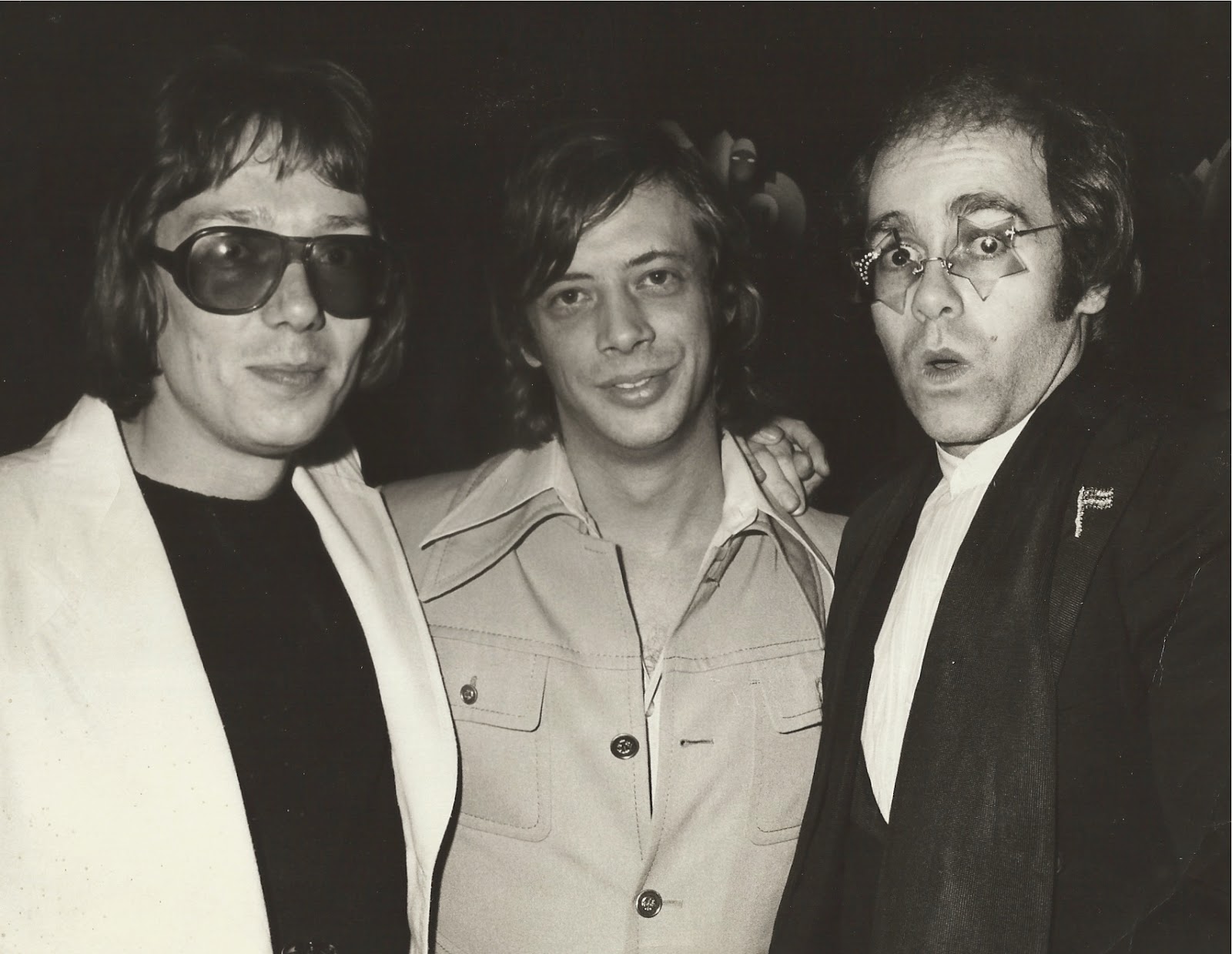 This picture was taken in 1976 and in the centre is my good friend Ashley Pandell whose bar and restaurant on Fifth Avenue and 13th Street in New York – Ashleys – was the favourite music biz hangout in the city in the mid-seventies. It was taken there by Bob Gruen.
I’d been friendly with Elton since the summer of 1970, and a year or two ago I was interviewed by Keith Hayward for his book Tin Pan Alley: The Rise of Elton John, not the first time biographers have come a-calling to talk about the (small) part I played in his early trajectory. Keith sent me a transcript of the interview and this is what I told him, more or less verbatim, somewhat repeating some of the info in a previous blog about EJ:

In the summer of 1970 I went to this festival at a place called Krumlin near Halifax in Yorkshire. I came from Skipton in Yorkshire which wasn’t far away and Melody Maker had asked me to cover it because I could stay at my dad’s there. I would not have gone on my own accord, especially as the weather was so bad at the time. The organisers of this festival had advertised other more famous groups as being on and it might have been Pink Floyd or The Who, who where much bigger draws than Elton back then, but they had lied because they did not have any contracts with these groups and I have a feeling that some of those who were there had gone to see these bands and may have been disappointed when they didn’t show up.
The gig was in a field and it wasn’t a particularly well organised affair. There were about 2,000 people there, maybe more. It was cold, wet and miserable. Elton came on in the early evening. Now you would think that being the summer it would not be dark by seven or eight in the evening but I think it was getting dark because of the weather. On he came with his trio with Nigel Olsson on drums and Dee Murray on bass and after about three numbers he realised that he could not play slow stuff, that he needed to do fast stuff to rock this place out and he did. He was doing one or two Rolling Stones numbers in those days and he realised he needed to keep the crowd warm because of the weather and he did a cracking show. Towards the end of the show he got these bottles of brandy – Courvoisier I think it was – and he had some plastic cups and he said if you are cold come and have some brandy and of course this went down really well and I was really taken with him. This guy was really trying hard here under difficult conditions to cheer everyone up. He was the star of the show and an unknown.
After his set I went backstage. I didn’t know what his songs were called. I knew one was called ‘Border Song’, another ‘Lady Samantha’ and he probably played ‘Your Song’ as well but I didn’t know it at the time. So I went backstage and found him. He was in a caravan getting changed and relaxing because he was energetic on stage and I knocked on the door and someone answered and I said I was from Melody Maker. “Is this where Elton John is? I would just like a quick word with him.” Elton overheard this and said if this is someone from Melody Maker then let him in. I was formally introduced to him and I said that was a real cracker of a show you did really well and I asked him about his songs, ‘Take Me To The Pilot’, ‘Your Song’, and so he clued me in on the titles of the songs. I remember Sandy Denny from Fairport Convention was in the caravan as well and we all chatted together. I didn’t stay at the festival for much longer after his set.
So I went back to my dad’s house in Skipton and then the next day drove back to London and wrote this piece on the Krumlin Festival and that the shining light was a newcomer called Elton John, a keyboard player, and I said I think we are going to be hearing a lot of this man in the near future, he was fantastic. The review came out and the following week Elton’s publicist Helen Walters called me and thanked me and said Elton was really thrilled and has asked if you want to meet him again. I agreed and I did an interview. Suddenly and within the next two months it all started happening for Elton John so I had caught him just before all that.
In those days Elton lived in an apartment building on Edgware Road called the Water Gardens which was luxury flats near the raised area of the M40 and I didn’t live that far away, Sussex Gardens, and I bumped into Elton in the Edgware Road area just by chance. I remember distinctly bumping into him in a dry-cleaners when he was getting his stuff and I think I had a drink with him in a local pub and I also met him at The Speakeasy a few times. The music business was very insular in those days and everyone used to go to the same places. I think that he and his future manager John Reid lived together at the Water Gardens.
The momentum for Elton started building in the second half of 1970 and I had done another interview by the end of the year. In December he supported The Who at the Roundhouse. I was quite friendly with The Who and Elton was supporting them and I remember seeing Elton backstage again and we exchanged a few words and he was saying how fantastic it was to be supporting The Who and playing to this large crowd. I remember he did a fantastic show and when The Who came on Pete Townshend introduced Tommy and dedicated it to Elton John because he said he was going to be very big.
Then just like Pete said Elton became huge and you couldn’t get Elton tickets for love or money and the market was flooded with Elton products, Tumbleweed and film soundtrack called Friends. He was really prolific, banging out records all the time. Within six months of that year Elton was one of the biggest names in the business, all happened really fast.


I’ll post the second half of this interview tomorrow.
Posted by Chris Charlesworth

All the popular brand name drinks for unbeatable discounted prices.

Start following our signals today and gain up to 270% per day.