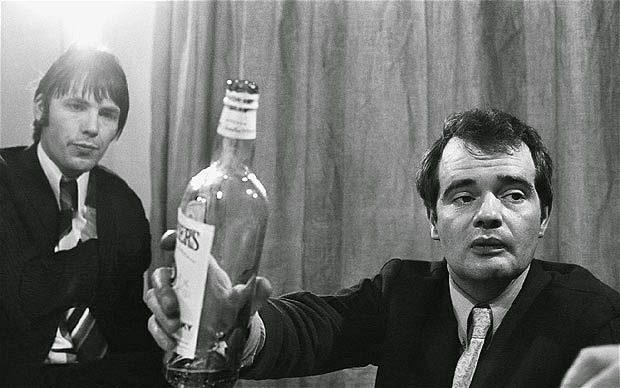 Yesterday’s Observer carried an article about two films in the works about Kit Lambert and Chris Stamp, The Who’s original managers, one a documentary, the other a ‘feature’, which probably means actors will play the roles. Oddly, I never met Stamp while I worked for Melody Maker but I came across Lambert a lot, the first time at a gig at the Lyceum on the Strand where Chris Welch introduced us. I was delighted to meet him but it was clear Kit was three sheets to the wind, hog-whimpering drunk as they say in some parts, so even though I was keen to chat he was incapable of responding.
I saw Kit at Track’s offices a few times over the next year or two and thought he was magnificent, so over the top as to be down the other side. He didn’t seem to be at many Who gigs, though he was at the Oval in September 1971 and was among the party that went out to dinner afterwards that included Pete, John and Keith, ‘Screaming Lord’ David Sutch, and me and my sister. I think Kit may have picked up the bill. I know I didn’t.
The next time we met was the most dramatic, backstage at Madison Square Garden on Monday June 10, 1974. As I relate in an appreciation of Kit elsewhere on Just Backdated, he was in the dressing room after the gig which had not been one of The Who’s best. Everyone was shouting at everybody else, trying to pinpoint the reasons for the shortcomings; bad sound, no new material to perform, an aversion to the Garden as a venue and, certainly, too much alcohol consumed by everyone apart from Roger. At one stage Bob Pridden, their ever-loyal soundman, ran from the room threatening to resign and I followed him, steering him an empty room nearby and telling him not to – as if!
Meanwhile, Kit – as drunk if not drunker than anyone in the room – was demanding to mix the on-stage PA in future, a ludicrous suggestion. It was at this point that I re-entered the dressing room and Peter Rudge, The Who’s tour manager, pleaded with me to somehow remove Kit from the scene, which I somehow succeeded in doing, steering him towards one of several limousine parked backstage. On the ride back to the Navarro Hotel on Central Park South, I asked Kit to request the driver to stop so I could buy a packet of Marlboros. We stopped and Kit himself rushed out of the car and into a liquor store. He came back with two cartons – 20 packets.
“I only wanted one pack,” I said.
“Bah… never do things by halves, old boy.”
The last time I saw Kit Lambert was in South Kensington in, I think, 1980. I can’t remember what I was doing there but I was walking past a Rolls-Royce dealership when I spotted him looking into the window, admiring some fancy Roller. He looked very dishevelled, a bit woebegone, and I’m not even sure he recognised me.
“Thinking of buying one?” I asked for want of anything better to say.
He looked at me and screwed up his eyes. “Maybe,” he said. Then he wandered off, evidently unwilling to engage in conversation. Of course I had no idea that he’d lost all his money, and I hope he didn’t think I was being facetious. That didn’t occur to me until much later.
Kit died the following year, virtually destitute, from a brain haemorrhage incurred after falling down a staircase at his mother’s house in Fulham.


Here’s a link to the Observer story: http://www.theguardian.com/music/2015/feb/21/who-kit-lambert-chris-stamp-roger-daltrey-film
Posted by Chris Charlesworth

Are you paying more than $5 per pack of cigarettes? I'm buying high quality cigarettes over at Duty Free Depot and this saves me over 70% from cigs.

BlueHost is ultimately the best hosting provider for any hosting plans you might need.

Follow our signals right now and make up to 270% per day.