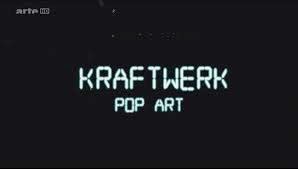 An otherwise enjoyable documentary on Kraftwerk broadcast on BBC4 last Friday, which I recorded but only got around to watching last night, was marred by the critic Paul Morley’s constant need to dismiss as insignificant all rock music that doesn’t accord with his narrow definition of art. I’ve grown accustomed to Morley’s brainier-than-thou attitude over the years, but there were moments when he was especially irritating on this programme.
I have admired Kraftwerk ever since I first heard ‘Autobahn’ in New York in 1975, and I’ve some sympathy with Morley’s theory that they are closer in form to ‘artists’, ie abstract painters who create soundscapes, than musicians who write popular songs, but that doesn’t mean all rock music not allied to Kraftwerk is irrelevant, as Morley seemed to imply, or that to move around on stage in time to the rhythm is ‘ridiculous’ as he specifically stated.
I suppose Kraftwerk’s deliberate shunning of the cult of personality is bound to appeal to critics for whom the product is all that matters; of far greater import than those who create it. Actually, I’m quite taken with the idea that scientists, as opposed to musicians, or even robots, created KW’s music, and I have often wondered why instead of having names, the Kraftwerk personnel could not simply have been referred to as Number One or Number Two, like Patrick McGoohan in The Prisoner, and thus remained completely anonymous.
All of this adds enormously to Kraftwerk’s unique charm and made for a fascinating documentary. This most uncommunicative of groups haven’t given any interviews for 30-odd years so this presents a challenge to the producers, but there was some fascinating old footage of the group on stage with Can before they got into their stride, and wonderful new live footage from the 2013 shows at Tate Modern, even though whoever comprises Kraftwerk these days are more inert than live on stage. There is something slightly unnerving about the sight of four musicians in illuminated spaceman outfits standing stock still behind consoles on which they push buttons, but it does somehow beg the question as to why bother? Why not simply play the recorded music loudly through a state-of-the-art sound system and show the spectacular graphics? Well, Ralf Hütter does sing in a manner of speaking, and from time to time there’s a slight movement on the part of one of his teammates, but you can’t help feeling that any overt displays of enjoyment on their part will result in instant dismissal.
Not having spent much time listening to Coldplay I was completely unaware that their song ’Talk’ is built around the hook from KW’s ‘Computer Love’, and in the live footage shown in the programme this was clearly the key element of the song. Evidently Coldplay sought permission from Hütter who was pleased to have been asked, being as how others have sampled KW without asking.
Elsewhere on the documentary graphic designer Neville Brody and techno producer Derrick May had interesting things to say, as did Catherine Wood, the curator at Tate Modern who was responsible for staging the KW shows there. I thought Morley was correct to draw a line from classical music to Kraftwerk’s more melodic moments, like ‘Europe Endless’ and ‘Neon Lights’, but I was wondering what he was on when he suggested that computerised machines have more soul than instruments made from wood, presumably guitars. Worse, earlier in the show he had arrogantly written off The Beatles as Kraftwerk’s ‘nearest rivals’ in terms of influence, suggesting that the gap was a mile wide. No doubt Coldplay’s patronage was his worst nightmare come true.

I remember an early Channel Four programme that Morley presented about Brian Eno which l looked forward to very much, as you didn't see Eno on TV much back then. l didn't know who Morley was.
Imagine my disdain when Morley had himself super-imposed over the shots of Eno talking, spouting his brainier-than-thou bunkum, imagining himself to be more interesting than his worthy subject.
I've had no time for the pompous buffoon since.