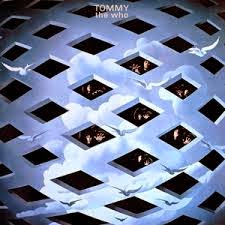 When I got up this morning I wasn’t sure what I was going to post on the blog today but as I sped through Wimbledon on the train to Waterloo the iPod shuffle served up the remastered ‘Underture’ from Tommy. I put down my newspaper, closed my eyes and, yet again, found myself carried away by the sheer beauty of this most absorbing, otherworldly Who track.
If ever there was a Who Orchestra* this was it. ‘Underture’, I think, is the nearest thing to a (mini)symphony that any rock band has ever recorded, just over 10 minutes of spellbinding, ethereal enchantment; the perfect fusion of electric and acoustic guitar, bass and drums, with a wash of choral flight here and there to add to the intensity. The melody is simple enough, the cyclical leitmotifs first introduced in ‘Rael’ on Sell Out here given a lighter, more delicate, touch; John’s bass notes the rigid staff around which Pete and Keith can dance, increasingly wilfully as ‘Underture’ takes root and grows. Having laid down the basic parts on his Gibson Jumbo acoustic, Pete overdubs the lead on electric, never overstating the riffs or playing with excess volume, so that the simplicity of the piece is maintained, quite gorgeously as it returns again and again to its roots, the ringing open notes, the octave drops and wave after wave of escalating crescendos.
But really, ‘Underture’ belongs to Keith. We’ll never know how long it took him to record his parts, his cymbal washes, kettle-drum rumbles and skittering snare parts. I like to think he did it quickly, intuitively, for he was never a man to dawdle in anything he did. I’ve written about his machine-gun snare in ‘Can’t Explain’, the way he sets up the leap back into the verse of ‘Kids Are Alright’ after the guitar solo and the tension he sustains throughout ‘See For Miles’ but for my money the supreme example of Keith’s wonderful drumming is to be found here, on ‘Underture’.
Tony Fletcher put it best in Dear Boy: “Moon gives up his rigidity and throws himself with great delight into the emotion of the music… matching Townshend’s guitar rhythms beat for syncopated beat before ducking and diving around the back of the other instruments: he knows exactly when to fill the gaps with imaginative flourishes, and he knows exactly when to leave the spaces wide open too… [he] offers up a series of emotive crescendos or otherwise doubles up on the guitar’s complex rhythms, and then overdubs the whole with grandiose symphonic timpani that take the number into another dimension. His rat-a-tat rolls on the snare that underscore Townshend’s suspended fourth chords halfway through are potentially the definitive example of the pair’s innate musical understanding; confident and unforced, they lift an already thrilling composition higher still. All in all, ‘Underture’ is the number that most clearly removes itself from the pantheon of music that had preceded Tommy. It’s too raw to be classical, though oon and Townshend’s sense of dynamics would do any orchestral conductor proud; it’s too well-structured in conventional chord patterns to be jazz; but it’s way beyond whatever had passed for pop or rock in the past.”
I can’t really improve on that, and I’ve yet to read a better appreciation of Keith as a drummer anywhere, ever. But the 1969-76 Who improved on ‘Underture’ when they played it live, albeit it in its compressed form as ‘Sparks’, always preceded by the rumbling growl that brought Pete to the 5th fret E chord that introduces its main theme. How I’d love to hear this again, on the 50th Anniversary tour we anticipate in a couple of months’ time. Surely Zak could get his teeth into this one, the perfect tribute to his one-time mentor.
‘Underture’ on Tommy truly does present The Who as an orchestra, the realisation of Kit Lambert’s dream to emulate his illustrious composer father. When its finale arrived on the train this morning, those lovely closing chords ringing in my ears, I was so captivated that I really had no choice but to play it again - and write about it.

* The (other) Who Orchestra, of course, appeared on the B-side of Reaction 591001, the A-side of which includes the lyric I hi-jacked for the title of my blog. They were, in fact, the Graham Bond Organisation, brought in at the last minute in March, 1966, to cobble together a B-side for ‘Substitute’ so as to get it released in a hurry to foil Shel Talmy’s attempts to derail them after Kit Lambert and The Who’s record producer fell out big time. The result was ‘Waltz For A Pig’, a horn-led jazz dirge credited to ‘Harry Butcher’ which I think was a pseudonym for Ginger Baker, then the GBO’s drummer.

Love the article and enthusiasm for the track. For what it's worth, the best Who orchestral work in my opinion was "The Rock" off of Quadrophenia. To think just John, Pete and Keith made that piece of music baffles me to this day.

A close second in my book. Thanks Jake.

Great, love the article. Made my day...and I agree with all of it.

One time listened to Tommy focusing only on Moon. Perhaps it was the finest performance ever by a drummer on a rock album.

Even a track that was likely designed just to fill space on what they decided was to be a double album has its magic moments. Could easily say the same about 'The Rock'.

Right on CC. For a little guy like me, who at 11 years old in 1970 had the Overture's Sheet Music on the top of my Santa list, learning to play piano for the first time with it...was....ummmm instructive. Moved quickly to the drums and played the entire LP straight through thousands of times. Never stopped trying to keep up with him/them.

I once saw it written that Keith was "lead drummer" for The Who. Very appropriate...

Follow our signals right now and profit up to 270% per day.